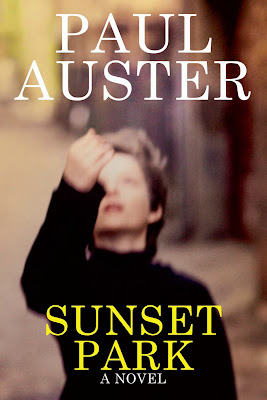 The most interesting essay on the contemporary literary scene I've read for awhile is this one by Chad Harbach about the two cultures of American literature, the MFA writers v. the New York writer (i.e. the ones who get published by trade publishers and reviewed.) At one point he notes: "And so the New York 'canon,' at any given moment, tends to consist of a few perennial superstars—Roth, DeLillo, Pynchon, Auster—whose reputations, paradoxically, are secure at least until they die, and beneath whom circulate an ever changing group of acclaimed young novelists..."

If Paul Auster's reputation is secure, it's hard to know--judging by the many reviews of this book on the Internet--whether Sunset Park will enhance it or not. As nearly every reviewer notes since the book came out in early November, this is something of a departure, at least in terms of style. It is more linear, more story-oriented, less "postmodern." Perhaps not coincidentally, Harbach also argues that the New York writers are under increasing commercial pressure towards "neatness and accessibility," and a clarity of presentation--Franzen's Freedom being the prime example. Again, Auster success in gaining New York writer-type approval for his more linear, more character and story driven approach anchored in contemporary places (and this novel did often remind me of Freedom) also remains to be seen. While Sunset Park made the Kirkus list of 2010's best books, it did not make that of the New York Times.

As for me, I enjoyed reading this novel a great deal. While some may regard references to The Great Gatsby or the movie The Best Years of Our Lives as postmodern, I regard them (apart from their modernist literary functions) as reflecting real life--books and movies are part of some people's actual lives (and not all of them live in New York), which may influence the course of those lives, and become part of the texture of particular times in their lives. The baseball references, and the lists of a variety of famous people buried in the same Brooklyn cemetery, were fascinating in themselves, and exactly the kind of thing that fascinates real people.

All the touches of context, from the main protagonist's job at the novel's beginning of cleaning out foreclosed homes to his friend's Hospital for Broken Things, ring true as well as provide a satisfying literary experience. Contrary to at least one reviewer, I don't find the people gathered at the odd abandoned house in Sunset Park to be losers. Almost everyone in the novel is dealing honorably and bravely with personal demons (both given and as a result of experiences) as well as societal failures and portents in a very contemporary period that sure looks like decay and decadence. (This house actually existed at the described location according to the author, but has since been torn down.)

In short, though there may be layers of literary symbolism at work, I read this novel as an organic whole reflecting the lives of unusual but convincing characters in these times. The world of the novel is much richer and perhaps closer to my sympathies than Franzen's in Freedom.

What prevents me from being a wholehearted advocate for this novel is the ending. Though the violence was almost preordained, and the hero's violent reaction at least dimly foreshadowed, his response to this situation in the final paragraphs of the novel seems just all wrong. Maybe I projected too much into this character, and though I don't see these paragraphs as stating as definitive a decision as some reviewers did, I felt the novel collapse rather than end, or even just stop. It was also the one time that I felt a literary intrusion--an attempt to manipulate something for literary or symbolic effect. In short, it ruined the experience for me. Maybe I'll take a more mature attitude on re-reading it. But that won't happen for awhile.
Posted by Captain Future at 9:42 PM