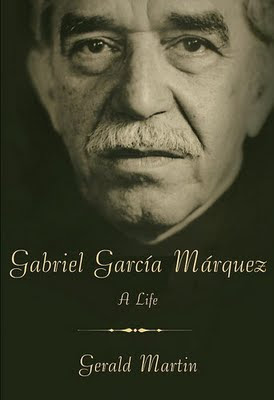 Gerald Martin's substantial biography of a singular writer, Gabriel Garcia Marquez, reviewed below.
Posted by Captain Future at 1:01 AM No comments:

When One Hundred Years of Solitude was published in the U.S.—especially when it appeared in paperback in the early 1970s—it arrived as a revelation. As books editor for a weekly newspaper in Boston I met writers and editors who came up from New York, and the talk was always of this sudden magician, Gabriel Garcia Marquez. No novel astonished the literati as profoundly, but that was not its most impressive accomplishment. When anyone asked me to recommend a book they might enjoy, this one was the easiest answer for years, and it didn’t matter if the reader was a Cambridge post-grad or a waitress in western Pennsylvania, they were all blown away.

As chronicled in this first substantive biography of Marquez, it was the same everywhere. Praised first by writers and critics across the Spanish-speaking world, it outsold previous record-holders by a factor of ten. When it was translated into Japanese, a prominent novelist in Japan was so overwhelmed that he stopped writing.

One Hundred Years... is the natural center of this biography, coloring everything leading up to it. Though Marquez himself wrote about his early life and years as a journalist in a wonderful memoir, Living to Tell the Tale, Gerald Martin finds more to reveal, and does so with prose that sometimes soars into Marquez territory. He details more connections between the life and this most famous novel than were previously known.

Marquez had a compelling story anyway: poor and abandoned by his mother, raised by his grandparents in a remote Columbia town, he struggled as a journalist and a writer of obscure fiction and not very good movies. Martin notes the European and American influences—Kafka, Joyce, Faulkner, Hemingway—of the writer who would personify new Latin American literature. The local popular music (which he sang in cafes) influenced him, as well as Bartok and the Beatles (the album “A Hard Day’s Night” played as he wrote.) His “magical realism” also came from his grandmother’s stories.

Yet One Hundred Years of Solitude was just the beginning. Next he published a literary tour de force, Autumn of the Patriarch, with chapters of a single long paragraph and even of a single gargantuan sentence. It is at once a tribute to his modernist models and an exploration of Latin American history. Some literary experts consider it his best work.

But he didn’t abandon the other half of his astounding success: ordinary readers. Novels that followed that, like Love in the Time of Cholera, were his most popular. His Chronicle of A Death Foretold, Martin writes, printed more copies “than for any other first edition of any literary work ever published in the world.”

Martin writes well and perceptively about the different locales of his life, and how deeply Garcia Marquez felt connected to his home area, which was a cultural but also a class grounding. He follows the important relationships, providing vivid descriptions of the characters in the author’s life.

Martin notes his political notions and actions, his fascination with power, and his controversial relationship with Fidel Castro. His point of view on these matters and the time he spends on them was less of a problem for me than the falling off of focus in the last third of this book, and Martin’s increasingly querulous tone. Still, it’s a fascinating account of a singular life, and an admirable accomplishment. Insofar as Garcia Marquez is a hero—and in many respects he is, to me as well as others—this can also be considered an heroic work.
Posted by Captain Future at 12:56 AM No comments: