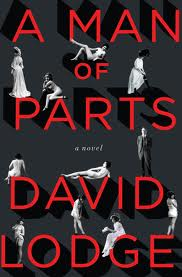 Reading for pleasure during these months has mostly been re-reading.  One exception was A Man of Parts, David Lodge's novel about H.G. Wells.  Even this was in a sense re-reading since I had read many of his sources, including Wells' autobiography, over my past decade of interest in Wells and the future.  However I had tended to skip over the sexual relationships, which is Lodge's chief subject, although he's pretty good on Wells' ideas and literary accomplishments--on Wells as writer as well as lover.

Despite the mock- titillating cover art and naughty advert quote about Lodge being specialist in "intellectuals behaving badly in bed," it's a fair treatment that balances Wells' views with those of the women involved (all very willing to start) though the point of view is basically HG's.  I did appreciate that a novel not based on a real subject would probably have left a few of these relationships out because the parade did get tiring.  But as usual Lodge found ways to overcome the problems inherent in the subject and keep the book interesting if not always involving, though it often was that as well.  It did give me a more comprehensive view of Wells.  And as a description of Wells or this book,  the "behaving badly in bed" is tripe.

In volume my biggest sustained re-read was a collection of three early novels by William Eastlake.  I'd read them individually a long time ago, in college, shortly before Eastlake came to teach fiction writing for a term.  I was babysitting for a lit teacher who had the hardbacks, and I read one or two that night, and I believe I borrowed the third, but it could be that I read only one of them and parts of the others.  They were collected into one volume in the early 70s (3 by Eastlake) to capitalize on the movie version of his best known novel Castle Keep (set in World War II Europe) and the publication of his Vietnam novel, The Bamboo Bed.

The three novels are set in New Mexico, with different versions of the same family involved.  Eastlake later edited them to form a kind of cycle, published as Lyric of the Circle Heart.  I pulled that earlier paperback collection down from my shelf.  I admired Portrait of the Artist with 26 Horses and The Bronc People a lot, but thought the first novel, Go in Beauty, was a little too Hemingwayesque. Eastlake was a unique voice in the 60s and 70s, and rereading these books he remains so.  I took his fiction course and corresponded with him for a few years afterwards.  (This photo--that's Eastlake in profile--is from an interview he gave at around the time I knew him.) Two things he said have always remained with me.  One was in an interview for our Knox College newspaper, and I can only paraphrase: "Writers are born, and shaped by rejection."  Shaped by rejection turned out to be absolutely true.

The other was a laconic line he uttered in class, so softly that I'm not sure how many at that long table of my fellow testosterone-inflamed big talkers heard it.  I happened to be sitting next to him so I did.  "All the great writers have one thing in common," he said. "They wrote their books." 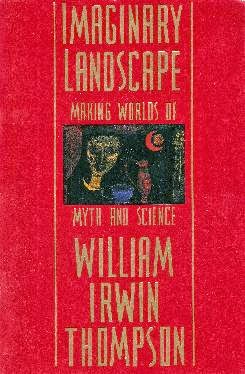 I just finished re-reading William Irwin Thompson's 1989 book, Imaginary Landscape: Making Worlds of Myth and Science. I have nearly all his books (including his novel but excluding poetry volumes) and reading them always prompts new thoughts, even when I can't completely follow.  His thought--his synthesis-- is still so far in advance of other writers I'm familiar with, it's a shock to see in this book contemporary references to the Soviet Union and South Africa during apartheid.  He has a web page which includes a most unusual and well-written blog of reflections.  This time I wonder: he has developed upon McLuhan's work and insights, among others.  But who is developing upon his? 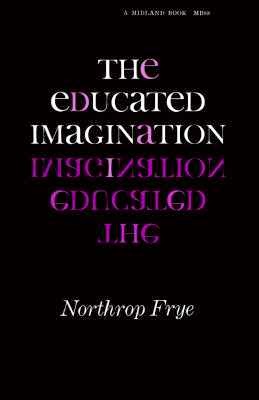 Finally I need to mention re-reading Northrup Frye's The Educated Imagination.  This thin volume based on six radio talks is succinct and profound, beyond technical matters of literature to philosophy, psychology, etc. with application to the political world and society in general, especially at this point in history.  I hope to write something more on the content of this book elsewhere.  But here I note that I am grateful to have rediscovered this book, which now assumes a central place.

Now I can't end without saying that my reading for pleasure has included bits and pieces of other books as well as indulgence in favorite genres, including re-reading a couple of Hardy Boys novels (one of them modern, the other from the original series) and Sherlock Holmes stories.

Posted by Captain Future at 12:42 AM No comments: 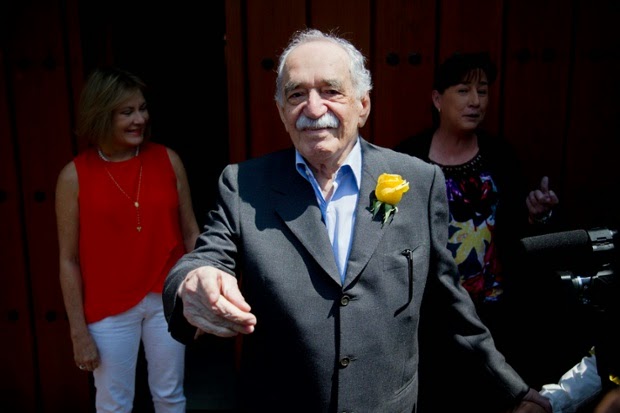 Gabriel Garcia Marquez on his 87th birthday this year

Gabriel Garcia Marquez, the greatest writer who began publishing in my lifetime, died today.  He was singular in his ability to delight readers of every class and country.

He wrote inimitable fiction and insisted on journalism as a literary form.  His Nobel Prize lecture was mostly about Latin American history rather than literature. It ended:

On a day like today, my master William Faulkner said, "I decline to accept the end of man". I would fall unworthy of standing in this place that was his, if I were not fully aware that the colossal tragedy he refused to recognize thirty-two years ago is now, for the first time since the beginning of humanity, nothing more than a simple scientific possibility. Faced with this awesome reality that must have seemed a mere utopia through all of human time, we, the inventors of tales, who will believe anything, feel entitled to believe that it is not yet too late to engage in the creation of the opposite utopia. A new and sweeping utopia of life, where no one will be able to decide for others how they die, where love will prove true and happiness be possible, and where the races condemned to one hundred years of solitude will have, at last and forever, a second opportunity on earth.

Yet at other times he talked with wisdom and compassion about the work of writing.  One of my favorites:

But my favorite, that in some sense serves as an epitaph, is this:
"Some say the novel is dead. But it is not the novel. It is they who are dead."
Posted by Captain Future at 11:37 PM No comments: 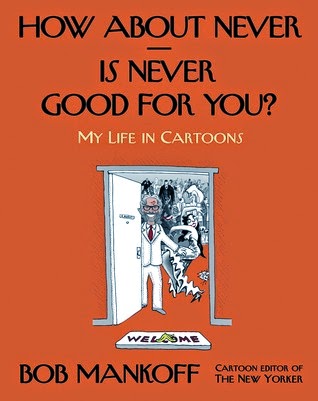 How About Never--Is Never Good For You?
by Bob Mankoff
Henry Holt

With one of the more famous cartoon captions of recent times as his title, its author and now cartoon editor of the New Yorker writes a breezy history of New Yorker cartoons and the current process of creation and selection as well as his own career.  At best it's a Groucho-voiced tour with seldom a dull moment.  Since New Yorker cartoons are the most fabled in existence, Mankoff has a well of curiosity to fill.  So he pours it on.  An entertaining book--with of course lots of cartoons (his own and others.) 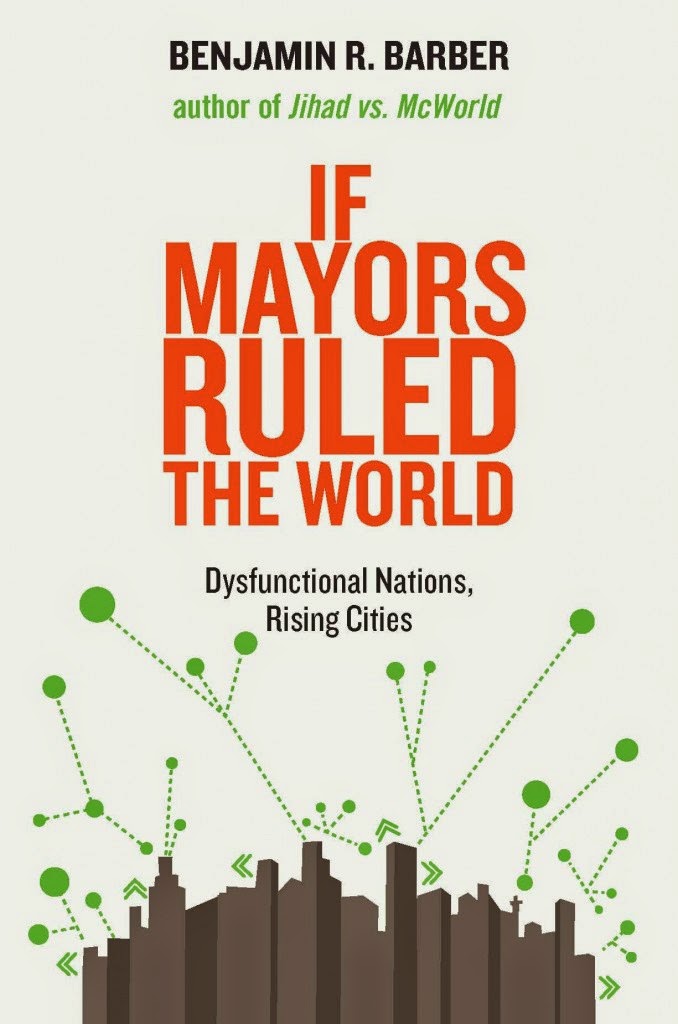 The U.S. Congress barely meets, and does nothing when it does.  National politics is a Twitter war.  But governors have to govern at least a little, and according to Barber, the mayor's office is where the rubber meets the road.  And that's true in Bogata and Delhi as well as New York City.  But Barber doesn't stop with showing how mayors are functioning--he has ideas about how they can participate in global governance, the kind that addressing the climate crisis is going to demand.  Barber acknowledges the generations of scholars and writers on the city, and the existing scholarship for which he provides "a megaphone."  But his portraits of mayors throughout the world and his challenging ideas are their own significant contribution to the topic, as well as a crucial approach to the challenges of the present and especially the future. 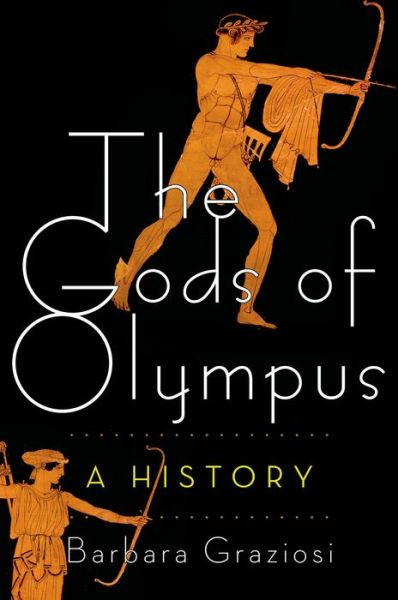 The Gods of Olympus: A History
by Barbara Graziosi
Metropolitan Books

Graziosi follows these Greek gods from their origins through several eras of Greek history, showing for example how they were adapted to Athenian democracy.  They go with Alexander to the East, are merged with gods of Rome, suffer a mixed fate in Christian Europe and even make appearances in the New World.  Right from the beginning their nature is questioned, modified, adapted and yet they recur in story, image and imagination. They are also a bridge between cultures and times, and remain essential figures in the foundation cultures of civilization. She writes: "If the Olympian gods continued to flourish, it was because people valued the ancient cultures they inhabited.  From the borders of India to the British Isles, diverse societies continued to engage with ancient philosophy, literature, art, and science and thus constantly met up with the gods of Olympus." Graziosi's prose is engaging, her scholarship seems careful, and her story is fascinating.  Her Epilogue on the Olympians after the Renaissance is particularly succinct and witty.
Posted by Captain Future at 9:27 PM No comments: 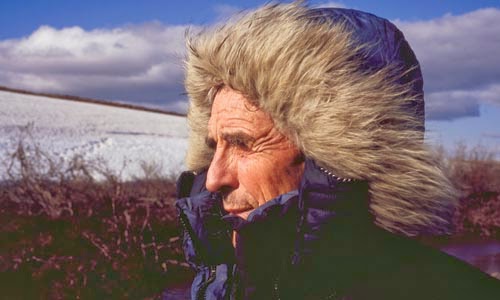 Peter Matthiessen was a friend and contemporary of Kurt Vonnegut and William Styron, but his writing career was amazingly different and very individual to him. His career began as an expatriate writer and part-time spy in Paris (where he helped found The Paris Review) and ended as a Zen Monk in upstate New York.  In between it took him to Africa, the high Himalayas, the Pine Ridge reservation and Antarctica.

He became most noted for writing nonfiction about nature and travel, but at considerable personal cost (financial and otherwise) he wrote about the plight of Native Americans (and specifically what could well be the most conspicuous injustice of 20th century America, the continuing incarceration of Leonard Peltier), and then about his Buddhist practice.

He also wrote novels, the form of writing that was most important to him.  More than 30 books all told, in a long, rich and singular life that ended at the age of 86. 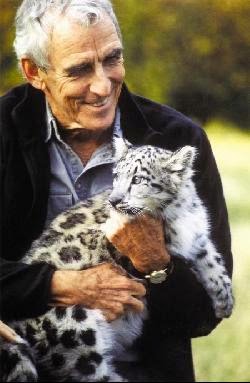 He left behind books that will be important for whatever uncertain future books may have.  Personally I revere his The Snow Leopard (and its companion Nine-Headed Dragon River), In the Spirit of Crazy Horse (and its companion Indian Country.)  He writes beautifully of North American shorebirds in The Wind Birds and of Antarctica in End of the Earth.  And the list goes on.  I first became aware of him in college when I read parts of The Tree Where Man Was Born in the New Yorker.  It was a daunting yet inspiring and instructive work in certain ways for a fledgling writer to read.

But he is such a unique writer that even the most ardent readers of some of his books may well be immune to others.  Of his novels, I've read and admired Raditzer and especially At Play in the Fields of the Lord.  But I have yet to yield to the charms of the Watson series of fictions he worked and reworked in recent years, including his National Book Award winning Shadow Country (which made him the only writing to win this award in both fiction and non-fiction.)

The official publication date of his latest and now last novel is this coming Tuesday.  It's called In Paradise.

Here's his New York Times obituary. And here is a New York Times Magazine article with interviews during his last days. May he rest in peace.  His work lives on.

Posted by Captain Future at 12:10 AM No comments: