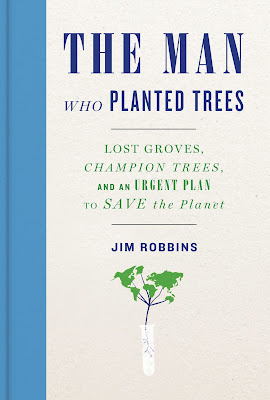 The Man Who Planted Trees: Lost Groves, Champion Trees, and an Urgent Plan to Save the Planet
By Jim Robbins
Spiegel & Grau

Jim Robbins is a science writer who has been frequently published in the New York Times. Ten years ago he began seeing the dense pine forest surrounding his Montana home die off, killed by the mountain pine beetle infestation enabled by warmer winters that is still destroying northern forests. It’s evidence of how global warming is adding to centuries of deforestation.

By then he’d met David Milarch, a hard-living Michigan farmer whose life was changed by a near-death experience and a subsequent visit by angels who gave him his mission: clone the oldest, largest, hardiest “champion” trees before it’s too late. Scientists, not necessarily convinced by angelic instructions, were surprised they hadn’t thought of this themselves. If it turned out to be possible (and often it did), it made sense. This time-tested DNA might provide a better chance for survival.

Robbins chronicles the ups and downs of Milarch’s efforts. One of his major successes was finding and cloning ancient sequoias in an unusually dry region of central California, conditions that global warming may well replicate elsewhere. But Robbins also writes about trees themselves, their barely understood wonders and the ways in which they nurture the planet, with clear objectivity but in a more complete way that mirrors the combination of standard and frontier science and so-called mysticism in Milarch’s world.

Even scientists admit we know dangerously little about the trees and forests we’ve been relentlessly destroying. Robbins quotes Werner Heisenberg that “what we observe is not nature itself but nature that responds to our questions.” “As we look into the world of trees," he wrote, "we begin to realize that there are many important questions that haven’t be asked by scientists.” But Milarch’s quest is not some feel-good exercise.  He makes use of what knowledge does exist.  For example, he and others involved realize that just planting a lot of trees everywhere is not enough--planting the right trees in the right places is crucial.

Along the way Robbins updates the exploits of Michael Taylor, the Humboldt State University grad who, while working at a Radio Shack in Arcata, discovered several of the largest redwoods in the world in the Jedediah Smith Redwood State Park, together with HSU forestry and wildlands professor Steve Sillett. Taylor (who moved to Hyampom, an isolated town of 261 people in Trinity County) expanded his search for champion trees to other species and countries, searching for them partly by intuition. His incredible record improved even more when he teamed up with Milarch. “When I travel with David Milarch, we really find trees. It’s beyond coincidence,” he said.

But Taylor helped Milarch most by finding champion stumps on private land, where only the owner’s permission is required to obtain the cuttings to clone, not a lot of government red tape. They started with the immense Fieldbrook Stump just outside Redwood State Park. From the stump and the redwood already growing out of it they hoped to grow hundreds and then thousands of copies. “We can use this tree as a symbol of the reforestation of the world,” Milarch said. “This stump is back from the dead, same as I am.”

The debates and the science of global heating tend to stick to the air--the atmosphere and its direct effects on the climate.  Then come the effects on land, humans and animals.  Usually left out are two huge and hugely important factors: the health of the oceans and the health of the forests.  When it first started to function as Gaia, the self-regulating organism of Earth, it was a planet of seas and trees.

I've done just enough research on forests for a couple of articles and a documentary video to be horrified by the self-destructive mania of humans who have cut down their forests and destroyed the ecology that sustains them.  In the few places on the planet where it hasn't happened centuries ago (from Greece to Ireland), it is happening now.  This book quotes Milarch and others noting that the remaining American forests are mostly second and third growth, often of different species than dominated the landscape before Europeans arrived with their axes to grind, and are therefore less resilient individually to any extra threat.  In most places, there are only forest remnants, not large enough to provide the resilient ecology.

There are plenty of threats to forests coming from global heating--beginning with the kind of destruction represented by the mountain beetle infestations.  Without the carbon-cleansing of the trees, among other essential benefits, humans are toast.
Posted by Captain Future at 1:09 AM No comments: