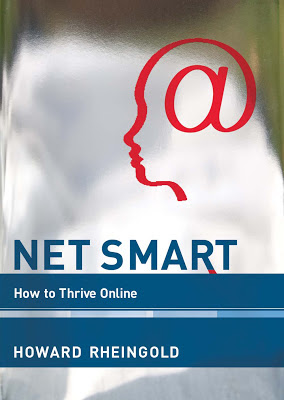 Net Smart: How to Thrive Online
By Howard Rheingold
The MIT Press

Howard Rheingold has a white moustache. He dresses like the prototype of an aging hippie, but he’s been involved in personal computer theory and practice for 30 years. His social network experience goes back to one of the earliest example, San Francisco’s legendary The Well. Younger readers may know him as the author of Smart Mobs: The Next Social Revolution. So he’s positioned to speak to several generations on “how to thrive online,” including boomers.

But this is not a simple how-to book, full of bullet points and illustrations (though it does include some cartoons reminiscent of R. Crumb.) Rheingold writes about how to use the net “mindfully,” which includes critically. Two of his five web literacies (along with attention, participation and collaboration) are net smarts and crap detection. Still, his stance is mainly positive on the benefits and the social change inherent in what he calls the shift from group to network.

His approach is historical as well as theoretical, philosophical and practical. He pays attention to how adventures in cyberspace change individuals as well as society, and he considers several sides of those questions. He can be acerbic as well as inspirational.

One of his main assertions is that “the emerging digital divide is between those who know how to use social media for individual advantage and collective action, and those who do not.” Originally the “digital divide” meant the distance between the individuals and communities who could financially afford to fully participate in cyberspace and those who couldn’t. That divide still exists, especially as full participation seems to require frequent new purchases of the latest devices.

The author’s personal experience—as well as from his students and children—provides rare perspective on cyberspace. This is also a kind of guidebook to future practice, as Rheingold emphasizes the ethics of good networking and social collaboration. So part of his advice, in addition to how to manage information overload and survive on Facebook, is how to be a good participator and network citizen. Plus his emphasis on the skills of attention and critical thinking are useful beyond cyberspace.

The book is pretty clearly written but it’s not a fast read because there is at least one interesting idea on every page, and depending on individual net experience, a number of challenging topics. It’s also meant to be read beginning to end, which is not exactly the Internet way. It’s about 250 pages of text plus lots of notes and a mediocre index, but what’s missing is a sorely needed glossary of terms as they are used in the book. Overall it’s that paradox of the instant-obsolescence computer age: a keeper.
*

There are a few other books about these technologies and the real world for the computer literate on your shopping list this year.  Computing: A Concise History by Paul E. Ceruzzi (MIT) is exactly that: a clearly written history of computing, complete with names and places--and this one does have a glossary.  At 150 plus pages it's very handy, but still a solid and serious work.

Future Perfect: The Case For Progress In A Networked Age by Steven Johnson (Riverhead Books) is breezily written, with a point of view that's basically similar to Rheingold's, but of course it's a different book, with different perspectives, examples and elaborations.

The Technology of Nonviolence: Social Media and Violence Prevention by Joseph G. Bock (MIT Press) is even more specific.  It is cutting-edge and global, with chapters on Countering Ethnoreligious Violence in Sri Lanka, Interrupting Gang Violence in Chicago and Crowdsourcing during Post-election Violence in Kenya.  It begins with theoretical frameworks and ends with evaluations and recommendations.  This is a thoughtful, sometimes provocative but well-presented and serious work, especially for those grappling with such issues in government, NGOs and even the corporate world, and for students interested in these fields.

Posted by Captain Future at 11:33 PM No comments: 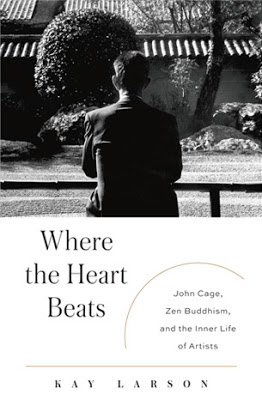 Where the Heart Beats: John Cage, Zen Buddhism and the Inner Life of Artists
by Kay Larson
Penguin Press

Kay Larson makes a convincing case that, after gathering particular artistic and philosophical strands together from others, John Cage added his own insights and innovations to become a dominant influence in 20th century arts. Those insights were primarily from his understanding of Zen Buddhism, and it is Larson’s singular contribution that as a Zen practitioner, she can elucidate them.

Larson was a distinguished New York art critic before she began Zen studies with John Daido Loori (whose book Cave of Tigers I particularly admire.) This unique view of John Cage is organized by portraits of other artists—those who influenced Cage and those he influenced—as well as Cage’s own biography. As the subtitle suggests, the emphasis is on their inner lives.

Among Cage’s early influences was the artist Morris Graves. They met in 1938 after a Cage percussion concert in Seattle that Graves disrupted, to Cage’s delight. Eventually they shared a house. Graves, who had traveled in Asia, introduced him to Zen, though flavored with his wild Dadaist demeanor. Then again, as Larson points out, “Zen wit” has always been a draw.

Cage’s convictions were eventually consolidated by attending classes at Columbia University in the 1950s with D.T. Suzuki, the first Japanese expert to bring Zen to America. Cage refined his artistic credo: “To use art not as self-expression but as self-alteration. To become more open.” This was the basis for his techniques of chance operations. According to Cage, indeterminacy short-circuits pre-judgment, so it pushes open the doors of the mind to the discrete reality of what’s present. It can also suggest new ways in which sounds or the 90 stories Cage assembled by chance are related—complex relationships emerge.

Larson makes good use of Cage’s writings, which were themselves (I think) even more widely influential than his music, and in some ways an essential part of the music.  The sense of liberation those writings gave those who didn't have the opportunity to experience his lectures and performances, was inestimable, as Larson demonstrates.  For me, it was not that Cage's own aesthetic was the absolute alternative, but that there were no absolute alternates:

They ask what/the purpose of art is.  Is that how/things are?  Say there were a thousand/ artists and one purpose, would one/artist be having it and all the nine hundred and/ninety-nine others be/missing the point?

Larson's book is full of the creative figures of 20th century art and music who felt that liberation and who were part of living it for others, from the fascinating but relatively obscure to the well-known, including Jasper Johns, Robert Rauschenberg, dancer Merce Cunningham, poet John Ashbery and Yoko Ono. Larson also writes about the impact of Zen on American arts in general, with Gary Snyder and the Beats. Together they explore an important substratum of particularly American culture.

John Cage (who died in 1992) was a presence. As a student I met him several times, heard him lecture and saw the Merce Cunningham dancers perform some of their collaborations. Several times Larson emphasizes the integrity of his presence, and his persistent open smile. That’s how I remember him. He embodied his world view more completely and serenely than anyone else I’ve encountered—apart from Buddhist monks.
Posted by Captain Future at 12:35 AM No comments: