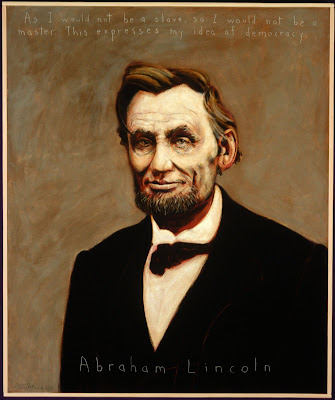 Lincoln defined the American Dream as including
"For the people."

Posted by Captain Future at 11:58 PM No comments:

The American Dream and the Gospel of Wealth:
The Fight for a Productive Middle Class Economy
by Norton Garfinkle
Yale University Press

A recent analysis of economic data by the McClatchy newspaper chain found that the number of severely poor Americans--those earning half or less of the income that defines poverty--grew by 26% in just five years, from 2000 to 2005.

This was not an isolated phenomenon. The report stated: "Worker productivity has increased dramatically since the brief recession of 2001, but wages and job growth have lagged behind. At the same time, the share of national income going to corporate profits has dwarfed the amount going to wages and salaries."

Norton Garfinkle provides the recent facts and figures to support his historical arguments in which the American Dream has been pitted against the Gospel of Wealth before, although there's been a mighty effort today to identify the latter with the former.

This book (which Bill Moyers called the most important in years) bears a laudatory blurb from Senator Hillary Clinton, but her current adversary for the Democratic nomination, Senator Barack Obama of Illinois may find in it an outline for his campaign. Since he began his campaign in Springfield, where Abraham Lincoln began his, he would be interested in Garfinkle's contention that it was Lincoln who first and most firmly identified economic opportunity as essential to the American experiment. (And of course, other Democrats--notably John Edwards and Bill Richardson--are also champions of this issue.)

Garfinkle shows that when America embraced the dream of economic opportunity and government's role in ensuring it, the country prospered. And when it fell for the Gospel of Wealth--which these days goes by the names of privatization and supply side economics--the great divide between the very rich and everyone else led to economic and social disaster.

A book for our times, indeed. My only disappointment is that a book published in 2006 doesn't have a word about the Apollo Alliance of labor, government and environmentalists, nor does it deal with the idea of "green collar" jobs, which represent one basis of hope for economic opportunity and a new American Dream for the future.
Posted by Captain Future at 11:46 PM No comments: