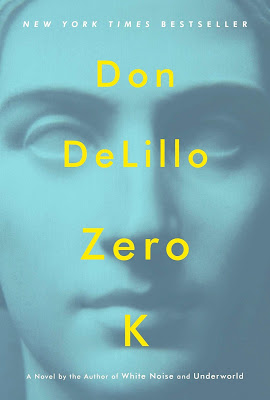 I've been reading Don DeLillo's novels with admiration since the early 1970s, shortly after he began publishing them.  I caught up with his second novel End Zone in paperback, and after finding his debut novel (Americana) with the indelible first line ("It was the end of another dull and lurid year") I then reviewed his third, Great Jones Street.  I was a rare fan of his next and probably least known novel (largely regarded as a noble failure at the time),  Ratner's Star, and was pleased to see it's his personal favorite.  It's the one I've re-read several times over the years.

I pretty much kept up (or caught up) with his work for the next three decades (I remember reading The Names in Cancun, and I even managed to see a production of his play The Day Room) but lost the thread after Cosmopolis in 2003, which I didn't much like. (Though I did read it at one sitting in a bookstore cafe.)  So it was with a little gap behind it that I recently read his latest, Zero K.  It's nothing short of masterful.  So it got me looking at DeLillo again.

I saw a recent interview and was surprised by recent photos.  When we were both younger we looked completely different from each other.  But now the resemblance (nose, mouth especially) is pretty striking.  Apart from old white guys tending to look alike, there's also the Italian element.  His parents came from the Molise region, next door to the Abruzzi where my mother and her parents were born.  For awhile in middle age I thought I was moving towards favoring my father's side, but by now it's my mother's, or grandfather's to be more specific.

DeLillo grew up in the Bronx, with eleven people in a small house.  He's said he had no problem with this and had a happy childhood.  But once he was on his own he lived alone in a small and sparse apartment.  Many of his protagonists also live in limited spaces, carefully calibrating their environments.

Those constricted environments reach a kind of apotheosis in the facility where much of Zero K takes place--a fortress building isolated from the world, designed as a kind of art project (International Style blankness with postmodern quirks) to house cryogenically preserved bodies and brains of very wealthy people, awaiting a future that will provide them new life.  Many of these belonged to people on the verge of death from incurable illnesses (like the protagonist's stepmother) but some undergo the process while still healthy.  Their bodies go to an area called Zero K.

When the novel is situated in this brilliantly imagined facility I was mesmerized as I haven't been by a novel in some time.  It sags when it leaves it, but these sections are necessary to the novel, and the contrast is perhaps part of the point. 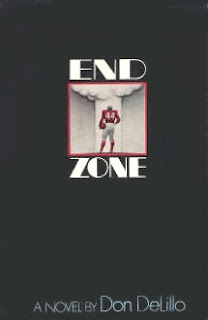 After reading it I felt compelled to go back to that first DeLillo I read, End Zone, about some unusual football players at a remote Texas college.  Maybe it was coincidence or maybe a vague memory (since I read it several times--for awhile I was working with a producer who wanted to option it for a film, and I was to get first crack at the screenplay. Rereading it all these years later, passages were very familiar) but its protagonist, Gary Harkness, seems to me very similar to Jeffrey Lockhart, the voice of Zero K.

Both are first person novels, both guys are self-confined, intent on words and their definitions, and obsessed with the vocabulary and imagery of violent death (Harkness the nuclear war scenarios of the 50s-70s, Lockhart the terrorism, refugees and natural disasters of this decade.)  They have similar names and even do similar physical exercises.  They could be the same man, but written differently.

Posted by Captain Future at 10:41 PM No comments: