THE BIG BANG: The Origin of the Universe by Simon Singh

is reviewed by William S. Kowinski in the San Francisco Chronicle Book Review of February 13, 2005. Here's the link. The review links back to this blog.
Posted by Captain Future at 11:25 PM 2 comments: 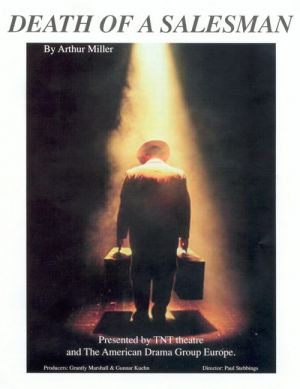 Willy Loman, the American Loser as Everyman . This poster was meant to illustrate the book review below but by coincidence, it also marks the death of Arthur Miller, whose "Death of a Salesman" is just one of his great plays illuminating the American experience. As Edward Albee said in tribute, his works are "essential."

Posted by Captain Future at 1:47 AM No comments:

'>Born Losers: A History of Failure in America
by Scott A. Sandage
Harvard University Press, 208 pages, $35.

From the 19th century of Emerson and Thoreau (the first and most paradigmatic "born loser" in the book) to the formulation of the American Dream in 1931 and presumably through the Dale Carnegie-redux 1980s of "market yourself" which is still with us, America has defined losers in economic terms, yet attributed that losing to personal character failure. We continue to do this today, '>Scott Sandage writes, "because a century and a half ago we embraced business as the dominant model for our outer and inner lives."

But the crass go-getter business model had philosophical help from the likes of Emerson, whose raptures extolling individual achievement transferred to blaming the victims of downward economic trends, large-scale chicanery and corporate confidence games, not to mention illness, guilelessness and sheer bad luck.

Sandage, who now (perhaps ironically) teaches at Carnegie Mellon University, shows through the lives of 19th century individuals how pernicious these otherwise exalting beliefs could be. Merchants who lost their Southern states markets overnight in the Civil War, for example, were still blamed---and blamed themselves---for their sudden insolvency.

Sandage shows how the question of responsibility echoed through the century ("Are we merely toiling at the eternal task of Sisyphus, or are we merely the victims of a vicious system and a more vicious practice?" asked an 1857 popular magazine), reflected in the evolution of bankruptcy law. Though "speculation" and capitalist risk made heroes of a few, they made humiliated losers of most. The "choice" Americans are supposed to cherish is all too often the choice of Melville's Bartelby the Scrivener, which is a life of self-deluded drudgery enslaved by a stupid system, or refusal and the ostracized pain and penury that all but inevitably results.

This is a fascinating book, both as history and moral history. The decade or so Sandage spent on it has paid off in its copious scholarship and polished writing. His epigrammatic style is thought provoking (and very quotable), though I would have welcomed a bit more context and exposition. The mostly 19th century history is revelatory, but his epilogue bringing his topic into the present, through the Great Depression, Willy Loman and Charlie Brown, to Bob Dylan, is positively scintillating. "Failure is not the dark side of the American Dream;" he concludes," it is the foundation of it."

It may be of some cold comfort to learn that there is ample historical foundation for the numbed moral blindness of the twenty-first century, that consigns the many to low wage servitude amidst the unimaginable wealth of a few. The number of bankruptcies is exploding, and separate studies show that half are due to health care costs of a single illness, even among those with insurance, yet medical costs in America are twice as high as they need to be. With a vastly larger population in communities without cohesion, America may soon find itself on the losing end of history.
Posted by Captain Future at 1:30 AM No comments: