The Salterton Trilogy by Robertson Davies 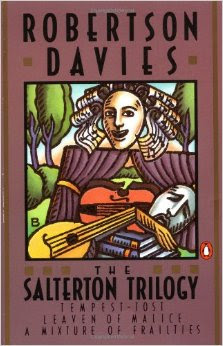 Henry James famously said that a writer should be a person upon whom nothing is lost.  Robertson Davies appears to have been that writer.  An actor, theatrical producer, a newspaper editor, all before and during his career as a fiction writer, Davies turned his experiences and observations in these and other areas, and in the various places where he lived and worked and just visited, into his distinguished collection of novels.

The three novels that comprise the Salterton Trilogy are his first, though they are assured and mature from the start.  They are comic novels in that they are wickedly funny if gentle social satire, and in that they have at least somewhat happy endings.

He starts from home.  Salterton is apparently based on Kingston, Ontario, where his family was prominent.  They published the local newspaper, well-regarded in the rest of Canada.  According to a Kingston resident commenting on Amazon, some of the characters are recognizably based on well-known figures in that town of the 1950s.

The three novels are somewhat interrelated, and consecutive in time.  One character in particular, though not a major character in all three, is a kind of through-line.  The first novel, Tempest-Tost, is about the townspeople involved in a community theatre production of The Tempest.  Leaven of Malice is about a tempest in a teapot over a mistaken wedding announcement.  A Mixture of Frailties has some of the same social satire concerning a will, but much of it consists of the education of a young woman singer.  It's the most serious, and its humor is most mordant and sly when a series of characters all confess to being responsible for another character's death. 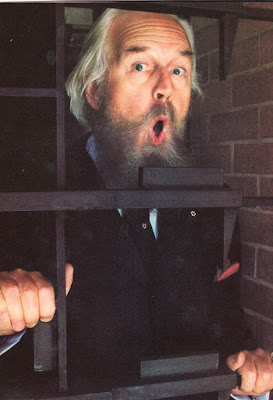 It's not hard to figure out what's going to happen in the plots, but I suspect readers would be disappointed if the outcomes were any different (there are a few twists however.)  There are some puzzling aspects.  The first novel begins with the points of view of two characters who then disappear almost entirely.  The balance between characters in Salterton and in London (with the young singer Monica) is skewed perhaps excessively towards Monica.  But the assured prose and voice give the reader every reason to be confident in it all.

Though they form fascinating portraits of the times and places, which is entertaining enough, they also transcend them in their human wisdom.  There are malignant characters drawn with merciless humor (or humorous characters with malignant tendencies), but also characters who balance out as well-meaning and even courageous enough for readers to care about them.

In a later novel, Davies describes a Jungian analysis.  But even in these earlier ones, he uses archetypes beautifully to people his stories--they are recognizable and mythical, creating a fictional feedback loop.  If this was indeed a conscious method, I've not read anything that does it any better.

Next I'm off to probably his most famous, the Deptford Trilogy.
Posted by Captain Future at 2:52 AM No comments: