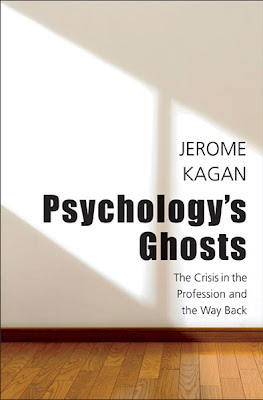 Psychology’s Ghosts: The Crisis in the Profession and the Way Back
By Jerome Kagan
Yale University Press

Contemporary psychological research is too flawed in its premises and procedures to really prove what it says it proves. So it may provide an errant basis for diagnoses and treatments, or the grand explanations of human thought and behavior derived from it, perhaps as expressed in such books as Daniel Kahneman’s Thinking Fast and Slow (reviewed here below.)

Such a critique comes from a psychologist so eminent (and so old) that the castigation it invites from the operationally arrogant psychological establishment won’t hurt him. Since it’s by Jerome Kagan, Harvard professor of psychology Emeritus and a distinguished author, it might even be considered. Though I don’t think even he is counting on it.

Kagan isolates four problems, which come down to overconfidence in a fatally limited set of assumptions. He notes for example that psychologists often ignore differences in their human subjects, such as age, cultural background and class, as well as the setting. “Too many papers assume that a result found with forty white undergraduates at a Midwestern university responding to instructions appearing on a computer screen in a small, windowless room would be affirmed if participants were fifty-year-old South Africans administered the same procedure by a neighbor in a larger room in a familiar church in Capetown.”

This is not drollery: American university students of European background were the main subjects for more than 2/3 of the papers published in six leading journals between 2003 and 2007. There are usually a small number of participants, yet universal conclusions are offered.

“Missing Contexts” is one such problem. Another is assuming everyone shares your definitions. Kagan finds that psychologists assumed that “happiness” always means the kind of self-aggrandizement that appeals to Americans. “Not one of the seven greatest pleasures listed by one American writer...referred to acts that helped another.”  Yet other cultures “celebrate states of serenity, the quality and obligations linked to personal relationships, and social harmony.”

Another problem is inferring too much from a single measurement instead of a pattern. Psychologists too often ignore social class in assessing “symptoms,” and can be too quick to classifying a trait or behavior as an illness, regardless of origin or personal difference. This is more dangerous now that drugs with serious side effects are so quickly prescribed, and all but forced on some children whose high spirits may become hyperactivity, whose sadness is defined as depression, and whose shyness becomes social phobia.

Kagan is much more thorough and precise in this remarkable book. He has a chapter of positive recommendations, but as he notes, he’s not the first to point out these limitations, that have so far mostly been ignored. What he’s basically calling for is some humility, and acknowledgement of complexity, differences and connections.


I'll tell you why these conclusions particularly resonate with me.  One of the most famous and most often quoted lab psychology experiments of modern times is the Milgram experiments of the 1970s, in which participants were instructed to give electric shocks to people on the other side of a wall if they answer questions incorrectly.  With each incorrect answer the shock is intensified, and the victim can be heard screaming in pain.  The victims weren't actually getting shocks--they were in on the con.  The experiment was to see how many people will follow instructions and administer the shocks.  The answer was a shockingly high percentage of them.  I first heard it reported as being 100%.  Later the figure given for those willing to administer the most voltage (after the experiment had been repeated several times) was 64%.

This experiment was said to prove two main points: that people are willing to do what authority tells them to do, and that people will do so in that situation even if they believe that they wouldn't.  This in turn has led to a new conventional wisdom. For instance (based on this and other experiments) that people will take on characteristics of their role in a system regardless of their personal ethics--for instance, prison guards will always be sadistic towards prisoners.

Though the Milgram experiments were conducted in various ways and places over the years, enough to apparently satisfy Kagan, I have good reason to doubt that they prove any of that.  For I was in New Haven in 1970, where and when the experiments were being done, and I answered an ad in the paper that (according to Elliot Aronson's description) was for participants in this experiments.  My motivation to answer the ad was that it promised to pay $25.  I was "out of college/money spent" and checking out the New Haven scene.   But I called first and asked questions about the experiment.  I was actually concerned about whether drugs were involved.  I believe I was assured they weren't, but the answers I got about the experiments were otherwise so vague and deceptive that I immediately became suspicious that this wasn't on the up and up.  (And in fact it wasn't--the object of the experiment was not what the ad said: investigating how people learn and remember.)

So who were the participants?  They were people who (like me) needed or wanted $25, which leaves out a lot of people, but if you needed the money you might well be reluctant to refuse what you were being told to do to earn it.

But participants also were not people who (like me) decided not to participate because it didn't smell right.  In other words, they were people predisposed to put themselves in the hands of academic/scientific authority figures without question.  Hardly surprising that they would then do what these authorities told them.

So I'm not sure this was a true random sample of the population.  Furthermore, the results never smelled right to me either.  They were supposed to show how nearly everybody will obey an authority figure, to the point of causing pain.  But this was 1970--during the Vietnam war, just months before the Cambodia invasion and the massive campus protests in New Haven as elsewhere, ending in deaths at Kent State and Jackson State.  Antiwar politics and radical politics were rife among students in New Haven. The Berrigans were spiritual leaders in New Haven. It was precisely the time and one of the places where refusing the dictates of authority was happening all the time. And it was precisely the time when causing people pain--bombing them, torching their villages, and sending naive young Americans to kill and die-- was a very big issue.

So I have to wonder--just how many antiwar protestors, draft resisters and conscientious objectors answered that ad?  Nixon was President! Students were burning their draft cards. Ken Kesey, Timothy Leary, Abbie Hoffman, SDS, sex, drugs and rock & roll were culturally ascendant-- If there was ever a time and place where disobeying authority was culturally, politically and morally prominent, this was it.

So it's more than just possible that a great many people who would laugh at the guy in the white coat, tear the wires out of the machine and spit on their clipboards before singing "Alice's Restaurant" on the way out, just didn't answer that ad.  And that's pretty much what that experiment proves. Missing context indeed.
Posted by Captain Future at 12:53 AM No comments: 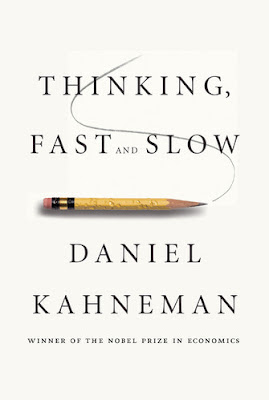 How does the human mind work? Each publishing season unleashes another cascade of books addressing that subject from a wide array of perspectives. This recent one got a lot of attention, partly because the author won the 2002 Nobel Prize in Economics for his work on decision-making.

Based on an experimental psychological approach, Kahneman’s premise is that we think basically in two ways: our “automatic system” of intuition and emotion (the “thinking fast” of his title) called System 1, and the more effortful system that employs logic, calculation and deliberation (“thinking slow”) called System 2.

He narrates how these work very well at first. But then he explains that he doesn’t continue using the “more descriptive” term “automatic system” because it takes longer to say than “System 1” and so “takes up more space in your working memory” which might distract you. Really? And it is less distracting than the extra step of trying to remember what System 1 stands for, each time it comes up?

I also wonder if he’s playing fair. He gives a quick math puzzle and instructs the reader: “Do not try to solve it but listen to your intuition.” Intuition gives most people the wrong answer, and that prompts him a page later to use this as evidence of “a recurrent theme of this book,” that people “place too much faith in their intuitions.” Or maybe too much faith in following instructions?

Apart from such quibbles that may (or may not) have more to do with the experience of reading than of the science that is the book's subject, what’s his basic point? Because the automatic system usually predominates, people make bad decisions, basically because they don’t calculate risks or otherwise employ statistical thinking but go with their cognitive biases. This makes for poor business strategies, bad stock market choices and lousy vacations.

This has some explanatory appeal (maybe rationalizing Republicans, or economists) but he seems to treat as axioms the propositions that effortful thinking is basically statistical, and statistics are the royal road to truth and happiness. Both my Systems tell me this is too limited. Relying on statistics doesn’t always work that well for science, let alone life. Statistics tells you about probabilities and groups. They deal well with at most two or three variables. Life involves the unique interplay of much more.

There’s some healthy skepticism about “expert intuition” which he equates with guessing, but not a very sophisticated view of intuition as holistic apprehension.  Some of the studies are provocative but the methodology is often suspicious and the conclusions too sweeping, at least for the evidence he presents.  Some of his insights are very interesting but as a reader I'm not convinced by his argument, evidence or tone enough to have a general confidence in the content.  Even though he appears to be more self-aware than many who write on these topics, his writing persona can be pretty smug.

Kahneman’s style can be engaging, and there’s much to explore in these many pages--and a lot to argue with-- if as a non-specialist you can see the point of navigating the math. Despite the generous if not fulsome praise by academic heavyweights displayed on its back cover (one placing this book in the company of Freud’s and Adam Smith’s landmark works, another calling Kahneman “one of the greatest psychologists and deepest thinkers of our time”) my statistically insignificant experience was of much ado about not enough.
Posted by Captain Future at 1:46 AM No comments: