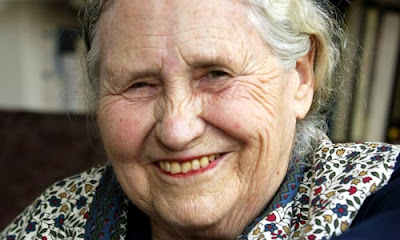 Posted by Captain Future at 11:36 PM No comments:

What Thou Lovest Well is Remaindered (A Series)

This is not a new book, but if you haven't read it, it's new to you, as it was to me until recently. After Doris Lessing won the 2007 Nobel Prize for Literature, I wanted to catch up with her, and this collection hit the remainder lists, so I got it.

Lessing's “Children of Violence” series (beginning with Martha Quest) made her name in the 1950s, and The Golden Notebook was a popular and important novel with young people (especially women) in the 60s. In the 80s she shocked the literary world by writing the “Canopus in Argos” series of “space fiction” novels, the first of which (Shikasta) was a retelling of earth history (drawn particularly from the Bible and similar books from other cultures) from the perspective of a beneficent galactic empire. Other literary writers followed in exploring such genres. Her most recent novels in this decade presaged the trend towards apocalyptic fiction.

Lessing will be 89 this year. The breadth of her experience as well as the length of her active life are at this point virtually unique in contemporary literature in the English-speaking world. Born in Persia—in what is now Iran—of British parents, she grew up in southern Africa, in what is now Zimbabwe, and was then the British colonial state of Southern Rhodesia. Her family lived on a small farm in the bush country, but her house was filled with books, and she was an ardent reader. Though her formal education ended with high school, she became part of university Marxist groups opposed to racial injustice. After a failed marriage, she moved to London with her son in 1949, and has lived there ever since, although she has traveled widely, particularly back to Africa.

This somewhat eccentric collection of pieces—articles from periodicals, prefaces to other books—touches upon many literary topics, from a delightfully new reading of Austen’s Pride and Prejudice to re-readings of once popular but now unknown books that she believes are still classics. But apart from being a window into her own work, I found three areas of special significance in this book. First is her knowledge of Islamic literature: both ancient texts which in many cases precedes and foreshadows western literature, and more contemporary works like those of the English Sufi, Idries Shah.

Second are her essays with geopolitical implications. Like many former Marxists, she is suspicious of ideology (including aspects of women’s liberation and political correctness) but she is not a nihilist or neocon, as some have become. She remains generously human, and asserts human freedom at every level. Third—and this links the preceding two—she champions the role of literature itself in our troubled and changing world.

There are several essays on that point that mirror her Nobel Prize acceptance speech. She writes about the decline of reading and loss of those insights and experiences in the rich West, contrasted with the true hunger for reading in poor parts of the world where books are hard to come by. She writes in a direct, conversational style about all these subjects (and others—she writes very well about cats)—but she is especially vivid on this topic, as she describes isolated Third World villages where people who haven’t eaten in days avidly organize groups to discuss a book they’ve just received. She also pointedly describes a village where the young boys begged for books, and upon her return there several years later, she found that they had become close-minded members of terrorist groups.

Fans of her space fiction will learn more about their cultural sources, and everyone will get a taste of this remarkable writer with a unique set of experiences and valuable point of view.
Posted by Captain Future at 11:27 PM No comments: