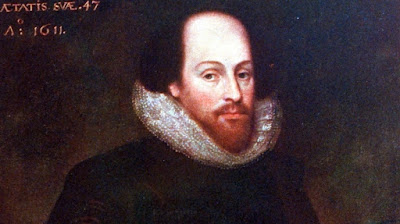 Four hundred years ago today, the deaths of two literary giants were recorded: William Shakespeare and Cervantes. Though there's dispute over the actual day they died, officially it is the same day for both: April 23, 1616.

The two men apparently did not meet (Shakespeare never left England, and after his soldiering days Cervantes stayed in Spain) and probably did not know about each other. Still the coincidence of this day is the occasion for a symposium at the Newberry research library in Chicago (and elsewhere), a which-said-what quotes quiz (it's predictably tricky) and an article on the subject in the Guardian, which points out that April 23 is also the death date given for William Wordsworth, Rupert Brooke and some lesser known poets. 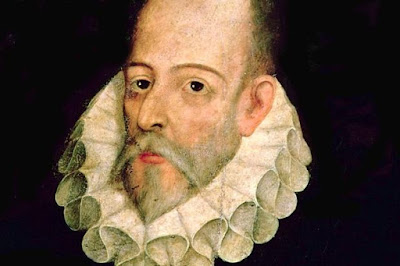 Also a comparison of the lives and work of Shakespeare and Cervantes that notes that a 2002 poll of 100 unnamed international writers named Don Quixote the "most meaningful book of all time."

Oddly, I stumbled on the coincidental death day by sheer coincidence (Kowincidence?) I've started reading a few pages of J.B. Priestley's Literature and Western Man (1960--when "man" was still an acceptably encompassing synonym for human) before bed, and a week or so ago I got to the page where he noted these deaths on this date of April 23, 1616. Apparently my math skills were up to realizing this was an anniversary year, though it took a calculator to figure out the exact number of years.

(Though perhaps not directly pertinent, I began reading the Priestly book because it was recommended (or favorably mentioned) by novelist and playwright Roberson Davies.  He saw it as a Jungian view of literary history.  My desire to read it was instantly abetted by realizing I owned a copy of it, always an extra bit of confidence and delight.)

What's fascinating about this coincidence of date is that these are not just two famous writers--their work is arguably the most famous in the western world and considerably beyond it. They are the most famous writers, in two areas of literature. As Priestly wrote, "Perhaps only Shakespeare has captured and delighted more minds than Cervantes." 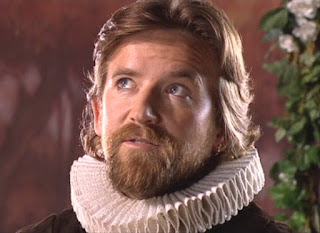 Shakespeare worked in what became the dominant form of his time and place, plays for the stage. His work helped make it dominant, and transformed theatre for all time. The secret of his perennial appeal, Priestly writes, might be not only the range of what he dramatized but his insistence on not being one-sided.

"In his desire to keep a balance, his wrestling with the opposites, even the very kinds of opposites they were, despite his immensely rich nature (and rich is surely his favorite word) and many-sided genius, he comes close to generations of ordinary Western men of intelligence and good will. It is perhaps the secret of his hold upon our world, century after century...."

"Though he conjures up everything from lyrical young love and gossamer fairylands to darkest witchcraft and bloody murder, he always leads us home...If the day ever comes when Shakespeare is no longer acted, read, and studied, quoted and loved, Western Man will be near his end."

Drama was also the dominant form in Spain, but Cervantes did something else. He put together some existing forms of tales to create something new. Don Quixote is generally considered to be the first novel. 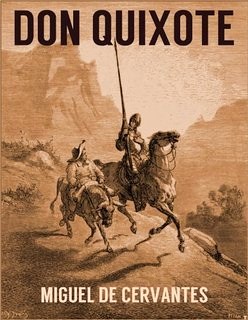 As Priestly writes: "...and in the gathering shadows of the age and his own time (in contemporary terms he was an old man), with no patron, no salaried place, few prospects, rich only in experience, memory, knowledge of men, the one-handed old soldier began to write his book. Then out of that experience, memory, knowledge, and an eruption of genius, he wrote the best novel in the world."

But literary definitions aside, he certainly defined a huge area for the novels to come. "Through its bustle of roads and inns, its sense of movement, colour and life, he reached far forward to inspire all the novelists who set their characters wandering." So to Fielding, to Dickens, Melville, Kerouac, Jim Harrison. "And as the magical ironist of the relativity of reality, of truth at war with illusion, he might be said to have pointed further forward still..." To Ibsen, Joyce, and pretty much everyone since.

"Of all our great novelists," he concludes, " he is the youngest, because he is the first, and the oldest, because his tale of the mad knight is an old man's tale. He is also the wisest."

It is worth mentioning that though both writers were famous in their time, by April 1616 the world had seemingly moved on, never to return. Shakespeare's drama was already going out of style at the end of his career. Though some of his plays were always performed somewhere in the years after his death, his work was not so appreciated again until the end of the eighteenth and beginning of the 19th century. Similarly, the novel did not emerge in a big way until about then, especially in England, and Cervantes' role as a pioneer as well as an exemplary became cherished.

So these two geniuses, together responsible for much of what life and letters are like today, died on pretty much the same day. Or...did they just return to where they came from on the same spaceship?
Posted by Captain Future at 10:37 PM No comments: