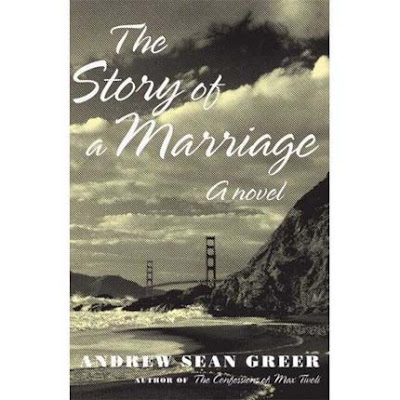 Posted by Captain Future at 3:00 AM No comments:

The Story of a Marriage
By Andrew Sean Greer
Farrar, Straus and Giroux

We’re in a strange time in the history of the novel. Though it would eventually cannibalize all previous literary forms, in England the novel began as almost satire, a playful burlesque of sermons, letters and travel narratives. It started as a popular form and prospered as such for a century: in his time, Dickens was a rock star. When H.G. Wells published The Time Machine in 1895, it was reviewed not as science fiction but as a novel with an unusual subject.

If you are unacquainted with this form, grown in the hothouses of university writing programs, you may find the beginning of The Story of a Marriage a bit slow and cloying, a bit too choked with poetic detail, elegant similes and domestic metaphor. But once you are used to its particular cadences and the story unfolds, you can experience in this compact but powerful story (195 pages) what the contemporary literary novel at its best can do.

Andrew Sean Greer is a Bay Area novelist whose previous book, The Confessions of Max Tivoli was a best seller there. This novel takes place in the Sunset neighborhood of San Francisco, but back in the early 1950s when homes were built there, so far from the city proper that it had been called the Outside Lands. The narrator is Pearlie Cook, a small town southern girl, married to the boy she had adored in her hometown, but whose life since then—principally in World War II—is a portentous mystery. Then one day, a stranger arrives.

At first we learn realities of those early 50s that transcend pop culture clichés, and realize that Pearlie is remembering all this years later, which gives some historical context. But soon the basic narrative strategy is apparent: one surprise after another, each changing everything.

Which is why telling any more of the story would violate the experience of reading it. That the surprises are so skillfully done is kind of the first surprise. That a novel so focused on relationships (as literary novels often are) turns out to imply and even state a greater significance is maybe the best surprise.

Greer excels at the literary novel virtues, such as revelatory details that build character and place, and metaphors that are both apt and believable in this narrator’s voice. He places the story in historical time very well (even finding a different metaphorical take on the 1953 execution of the Rosenbergs—husband and wife convicted of spying---than other novelists have, at least as far back as Sylvia Plath’s The Bell Jar.) In defining differences of men and women, husbands and wives in this period, the novel implies questions about how much has changed since.

As a further hint of larger significance, these sentences: “This is a war story. It was not meant to be. It started as a love story, the story of a marriage, but the war has stuck to it everywhere like shattered glass.”

I wouldn’t say this novel rises to the status of The Great Gatsby. But it stretches the form, suggesting personal consequences of societal contexts and events in new ways. Besides, once under its spell, it’s an absorbing read. Which is not something that can be said of every example of this genre.
Posted by Captain Future at 2:54 AM 1 comment: