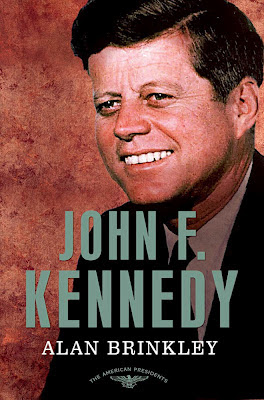 I turned 14 the summer Senator John F. Kennedy was nominated for President and I participated in my first political campaign. I had relatives I could visit in Washington to see the Inaugural parade in January, and by luck and pluck that weekend I was one of the first non-dignitaries to shake hands with the new President. So it isn’t surprising that I read the major books (and some minor ones) on JFK through the 1960s.  Then came the revisionists, the debunkers, the gossip-mongers, and I mostly passed on those, while being aware of their main points.

So I came to this relatively slim volume for a balanced view by a distinguished historian and biographer. It’s part of The American Presidents Series, co-edited by Arthur Schlesinger, Jr., the historian who was a White House aide to JFK and wrote his own long book on this presidency.  I assume he wouldn’t let serious errors pass.

Yes, Brinkley writes, JFK’s health was more precarious, and he was more of a womanizer than was known at the time. Brinkley handles such revisions fairly, though overall he seems so impatiently determined to demythologize JFK that it becomes harder to understand how Kennedy had such an impact on his times, or why he was so popular as President (and remains so.)  But mostly Brinkley’s narrative is factual. It lacks the detail to bring events to life, but most of the time it generalizes judiciously with the perspective of time and newer evidence.

It will probably amaze younger readers that so much of such importance and drama happened in such a brief presidency, including several foreign crises culminating in the Cuban Missile Crisis, as well as economic, political and civil rights struggles at home. I caught only one implied factual error, but otherwise Brinkley’s interpretations of events may not be mine but they are at least plausible. (I’d certainly place more emphasis on JFK’s American University speech and subsequent championing of the limited nuclear test ban treaty.)

On the question of whether JFK would have extracted the modest U.S. presence from Vietnam had he lived to be reelected, Brinkley is doubtful. But he doesn’t explain why he disagrees with the evidence to the contrary collected by government scholar James K. Galbraith, or the statements by Kennedy aides, including Schlesinger, that JFK was indeed planning to withdraw. Brinkley dismisses those who see JFK idealistically, oddly lumping them together with conspiracy theorists.

Still, as a brief primer on the Kennedy presidency this book succeeds pretty well. I wouldn’t stop here, though. For all their omissions, longer and earlier books by the likes of Schlesinger and Ted Sorensen still give a fuller picture of JFK and his times.
Posted by Captain Future at 8:59 PM No comments: 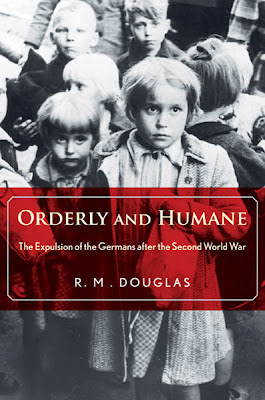 Orderly and Humane: The Expulsion of the Germans after the Second World War
By R.M. Douglas
Yale University Press

1940s movies and domestic propaganda put an understandably noble face on Allied efforts in World War II. It was only in the decades afterwards that some of the morally questionable and transparently brutal counter-evidence emerged: not just the Holocaust and Japanese Army atrocities but the British firebombing of undefended Dresden, the American saturation terror bombing of Tokyo, the deadly irradiating of Nagasaki, to name the most prominent . By the 1960s, war novels by American veterans were revealing unflattering memories.  Revelations continue--in the novel By Blood, the previous book reviewed here, for instance, the reality that even after the war, even after some German concentration camps were liberated, Jews continued to live in them, because no other country would take them.

But in today’s soundbite history, World War II has reverted to the purity of The Last Good War fought by The Greatest Generation. The truth as it still emerges is a great deal more complicated for what one historian calls the number one “multicide” in human history, with a minimum of 66 million dead, at least half of them civilians.

And the death toll did not end with the end of the war. Historian R.M. Douglas writes in compelling detail about a little known set of events: at war’s end the Allies ran “the largest forced population transfer—and perhaps the greatest single movement of peoples—in human history.” Some 12 to 14 million German-speaking civilians, most of them women and children, were extracted from their homes in eastern Europe and sent to Germany “amidst the ruins of the Reich, to fend for themselves as best they could.”

Some were transported in locked train freight cars, scenes that we know from Nazi treatment of Jews, and some were held in concentration camps, including Auschwitz. Starvation, disease and abuse resulted in half a million to a million deaths. Douglas explicitly states there is no legitimate comparison or equivalence to the Holocaust, but some of the Holocaust’s victims saw a moral parallel. An Auschwitz survivor viewed with shame the silence that surrounded these events. “We used to console ourselves by saying ‘only the Germans are capable of such things.’”

German speakers were expelled and their property confiscated largely at the behest of host countries (Czechoslovakia, Hungary and Poland) because they wouldn’t be tolerated by their majority populations, though no evidence was offered for this claim. The massive transfers—or what more recently would be called ethnic cleansings--quickly turned into bureaucratic and international nightmares.

Douglas relies on verifiable sources to describe these expulsions within the context of the relevant and tangled history of Europe, especially the legacies of World War I. They bear directly on the 1990s ethnic violence in the Balkans, and aspects of this story are way too reminiscent of the recent Iraq occupation. This is an absorbing and eye-opening account, an educational astringent and an antidote to the oversimplified and self-satisfied cliches about World War II that constitute the current conventional wisdom.
Posted by Captain Future at 3:17 AM No comments: