On the Black Hill
by Bruce Chatwin
Penguin 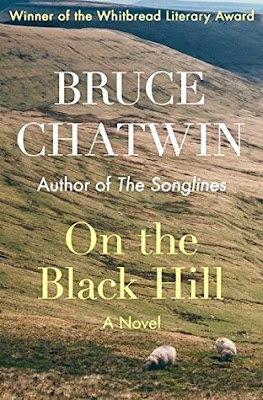 Bruce Chatwin became famous for his travel book On Patagonia in 1977, but for On the Black Hill, officially his first novel (published in 1982) he's said to have decided to write about people who never went anywhere.  He became even more famous for The Songlines (1987), the first book of his I read, which he insisted on calling fiction but which was mostly regarded as a kind of travel book.

Though the location of On the Black Hill is both ordinary and exotic, there is no doubt that this is a novel--and an excellent one.  But it is not prominently mentioned in articles about Chatwin (he died in 1989), and if I hadn't accidentally run across a copy of it in a second-hand store I probably never would have read it.  It's astonishing, both in how different it is from the Chatwin I have read, and as an outstanding but relatively unknown novel.

(I wrote about The Songlines and a collection of short pieces, What Am I Doing Here, here.)

The novel chronicles the lives of twin brothers who experience most of the 20th century in rural Wales, living in the same house, sleeping in the same bed for more than 80 years (with some important exceptions.)

Without obvious literary contrivances or sentimentality--nor even romanticism--Chatwin tells the story of a family and rural community with unfailing detail, especially of place and time.  Why then is it so magical, reminding me of the experience of reading Garcia Marquez' A Hundred Years of Solitude?  For there are no insomnia plagues or even duels to the death in this earthy and uncompromising yet mesmerizing and surprising tale.

Certainly such effects are won by Chatwin's skills as a novelist in structure and storytelling.  His language is apt but not showy.  And he makes the right narrative decisions--for example, by staying with the omniscient narrator (who sometimes dips into the thoughts of the characters) and staying away from dialogue.  For when there is dialogue rendered in rhythms and language of these characters, it gives us the flavor but is so different that it would take us out of the story if done more.

There's also the strangeness (at once simple and extreme) of the place and its people.  Chatwin's travel narratives move in space, but this novel moves in time.  Time and history are always part of his narratives, but this has that same story magic of nearly a hundred years of solitude in this solitary place.  The unfoldings, the connections and fatal turning points, the reconciliations, some prompted by impinging outer events like distant wars, but others by personality and place.  The sweep of the narrative is anchored by detail and character specifics.

But the magic perhaps resides most of all in the heightened intimacy of twins, and what their bonds suggest about what it is to be human.  The power of the bond, how the bond is tested, the differences that develop and yet the connection we failingly describe (and therefore ignore) as psychic--all of these are part of that magic, and the spell this novel casts.  If Chatwin had written nothing else, this book would be achievement enough.
Posted by Captain Future at 10:43 PM No comments: