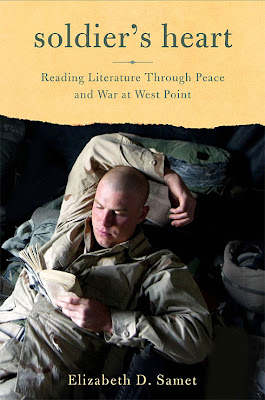 Posted by Captain Future at 10:54 PM No comments:

When she decided to apply to teach literature at the U.S. Military Academy at West Point, Elizabeth Samet had several things going for her. Her father had been a soldier, and her scholarly interest led her to the memoirs of Ulysses S. Grant. She was also athletic, which helped at this "relentlessly physical place." But for a graduate of Harvard and Yale, there was still a great deal of strangeness ahead. Her English literature and composition students were also learning to fire machine guns and to defuse improvised explosive devices. Embraced in a caring but sometimes claustrophobic community, she was awash in West Point culture and Army acronyms. And then came 9/11 and Iraq, which meant that her students were graduating into immediate mortal danger.

But during her decade of teaching, Samet moved from OBE (overcome by events) to insight, leading to this combination of memoir and meditation, scholarship and self-scrutiny, observation and commentary. Her gracefully written book, "Soldier's Heart," concerns West Point and her role there, most often in the context of larger questions (courage and sacrifice, obedience and moral judgment, Iraq and Abu Ghraib). It most compellingly provides portraits of young men and women charged with leading the U.S. military.

This review continues at the San Francisco Chronicle Book Review
Posted by Captain Future at 10:48 PM No comments: