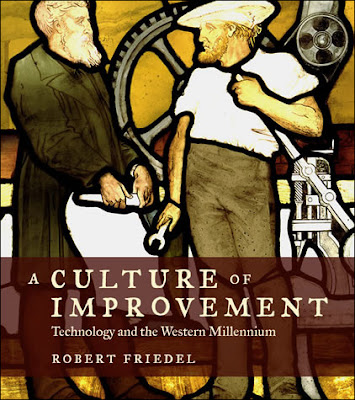 Posted by Captain Future at 1:53 AM No comments:

Where are we now, how did we get here, what can we therefore do to save the future? These are the concerns of serious books in these serious, critical times. The climate crisis and related environmental catastrophes as well as geopolitical, social and cultural factors that combine to threaten the existence of civilization and humanity itself, form the context if not the content of our most important writing.

The present and recent past are the subject of the most prominent and popular of these books, such as Bill McKibben's Deep Economy (Times Books), Benjamin Barber's Consumed (W.W. Norton) and Al Gore's forthcoming The Assault on Reason (Penguin Press.) But there are also new scholarly books that examine more of the history contributing to the crises of the moment, and that go into greater detail about what a successful future could look like, and how to get there.

The mid 19th century era of industrialization is emerging as a key period in analyzing our present predicaments. In West From Appomattox (Yale University Press), historian Heather Cox Richardson chronicles the rise of a peculiarly American middle class in the post-Civil War Reconstruction and western expansion. She presents a compelling narrative of this era of racial tensions and the greed of the Gilded Age.

American Leviathan (Hill & Wang) by historian Patrick Griffin begins the story even earlier, in the westward expansion after the Revolutionary War. Like Richardson, he writes about savagery on the frontier, particularly against American Indians but also against the land itself in a war for dominance of all against all and for the accumulation of power and wealth. Yet Griffin also organizes a nuanced political argument concerning the development of a peculiarly American relationship of citizen and state.

Alan Trachtenberg emphasized the rise of corporations in the late 19th century in his classic book, The Incorporation of America, (Hill & Wang) just reissued in a 25th anniversary edition. Now Trachtenberg (Yale Professor Emeritus of English and American Studies) adds color and cultural context to this period in a collection of essays entitled Lincoln's Smile and Other Enigmas (Hill & Wang.) These essays expand on another important theme linking the past to the future: the influence of media--from photography to film, fiction to architecture-- in shaping perceptions. Though he begins with Hawthorne, Lincoln, Whitman and Mark Twain, he also takes us into the 20th century and into the modern city, with Horatio Alger, Walker Evans, Louis Sullivan, Hart Crane, Lewis Mumford and Wright Morris. These frequently provocative portraits provide the sense of the times that supplements broader narratives.

The benefits and destructiveness of technology have been major themes from the 19th century onward, and technology is certainly at the center of the climate crisis and other challenges to the future. In Culture of Improvement (MIT Press), Robert Friedel concentrates on technological developments and their relationship to their times. This is a thorough study, well illustrated, that emphasizes the social context--the expectations that new technologies fulfilled and in turn created for newer technologies. The significance of Friedel's central argument--exploring how new machines were conceived to improve the life of their times--is in the specifics rather than the idea of "improvement," a familiar corporate rationale for new tech. A particular virtue of this book is this examining of actual historical context, rather than imposing a perspective. But though it begins these examinations in the European Middle Ages, it perhaps does not go back far enough. Looking at the role of tools and technologies in indigenous societies and cultures, as well as in non-western cultures, would add valuable perspective, and probably needed insight. Still, this careful and thoughtful book contributes to a necessary knowledge of how technology both responds to society and shapes it.

And what of the future beyond the general suggestions of many present-centered books, including those mentioned in the first paragraph? Design for Ecological Democracy by Randolph T. Hester (MIT Press) details a vision for the future in buildings and related systems of the built landscape, which is essentially a vision for daily life in the future that combines and expresses democratic ideals and functions, together with sound ecology and better relationship to the natural world. This is likely to become increasingly important as citizens demand greater response to the climate crisis as well as energy efficiency, but without sacrificing choice or happiness. This book offers social and environmental principles as well as technical detail and practical approaches to design in real world contexts that respect all aspects of human life. Planners and landscape architects in particular should find it illuminating and inspiring, but it is also filled with ideas accessible and attractive to anyone who cares about how to save this world while making it a world worth saving, full of pleasure and fulfillment. For example: "For us to derive pleasure from our cities, we must learn again how to walk."

Degrees That Matter: Climate Change and the University by Ann Rappaport and Sarah Hammond Creighton (MIT Press) is even more specific, relating university communities to the climate crisis. Besides academic research, the university community can provide experiential learning and living experiments for larger communities in interconnected strategies for meeting climate crisis challenges. Without visual illustration and with undistinguished and often technical prose, this is more of a summary and a handbook than a persuasive or visionary work. Still, in the right hands, it can make an important contribution.
Posted by Captain Future at 12:02 AM No comments: