Apart from books I've read or am reading for review: I've almost finished Robert D. Richardson's biography, William James: In the Maelstrom of American Modernism (Houghton Mifflin.)  Richardson is truly a pleasure to read, and he sets a very high bar for biographies.  He's an example to be emulated, and I simply don't know of a better biographer.  Having read his two books on Emerson, I've purchased his biography of Thoreau.

I've also been reading Poor White, a novel by Sherwood Anderson, and The Colossus of Maroussi by Henry Miller. Both are interesting for the writing and for the sense of the times they portray.  I'm not sure I'm going to finish either of them soon, however.
﻿
﻿ The 75th anniversary of a singular event in American history--the production of It Can't Happen Here, the stage version based on the novel by Sinclair Lewis, in 18 U.S. cities simultaneously by the Federal Theatre Project--is being marked this week by readings of that play by 23 existing theatres.  I was part of the Dell'Arte Theatre's reading, and introduced it with some words about the Federal Theatre.  I'd been astounded to learn about Federal Theatre several years ago, and took this opportunity to read more about it.  In addition to the books from my shelves I'd consulted previously (John Houseman's first memoir, Run-Through, and Mark Schorer's biography, Sinclair Lewis: An American Life) I found Gerald Rabkin's valuable essay in a 1967 anthology edited by Warren French, The Thirties: Fiction, Poetry Drama,  which I had purchased as a library discard.

But that same library still had some other books on the topic, including Arena, the memoir by the Federal Theatre Project's heroic administrator, Hallie Flanagan.  We've had our reading, I made my speech, and posted a lot on Federal Theatre on my Stage Matters site, but I'm still reading Arena.  A couple of other books I found very valuable are Voices From the Federal Theatre (Bonnie Nelson Schwartz and the Educational Film Center, published by the U. of Wisconsin, and which includes a DVD of a television documentary) and Free, Adult, Uncensored: The Living History of the Federal Theatre Project, edited by John O'Connor and Lorraine Brown (New Republic Books, 1978.)  This latter book, which I purchased used, has a wealth of wonderful illustrations, some but not all of which can be found online.  This is a disturbingly neglected subject--few people know about the Federal Theatre and what it accomplished, including theatre people.  But the audience last night was very interested.

I also read most of the novel It Can't Happen Here (Lewis co-wrote the play for the Federal Theatre, and later rewrote it himself for several commercial runs.)  The novel is much more wrapped up in its time, stated as happening in 1936, and using some names of real people. The character I read has three important scenes throughout the play, but in the novel I saw that he's referred to just once, as being sent to a concentration camp.  That's where I stopped reading.  How like an actor already!  The play is virtually unknown now, but despite some dated language and its melodramatic qualities, it's worthy of revival, especially for uncomfortable similarities to today.

Finally, in a bookstore I saw a new edition of F. Scott Fitzgerald's Tender is the Night, emblazoned with the words "Vintage Fitzgerald."  Well, what other kind is there?  Anyway, I picked it up and read the first paragraph, and now I'm reading one of the copies from my shelves--though not the one I marked up in college, which I still have.  Fitzgerald was a particular favorite and writing model then, though I haven't re-read him in years, maybe not since then or shortly after.  So I'm looking forward to it.  And resuming my voyage through Vonnegut.
Posted by Captain Future at 8:56 PM No comments: 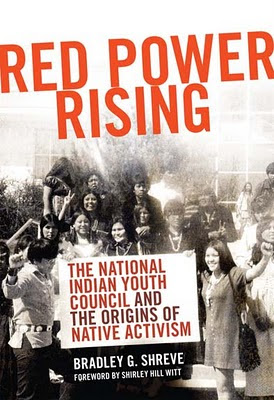 The usual narrative of Native American activism begins with Alcatraz and the American Indian Movement in the late 1960s. But scholar Bradley Shreve makes a persuasive case that activism was rooted in earlier decades, and specifically that much of its character was established through an organization founded in the early 1960s: the National Indian Youth Council. Moreover, the NIYC persists to this day, advocating principles that have become central to Native activism of all kinds: “treaty rights, tribal sovereignty, self-determination and cultural preservation.”

NIYC came of age in the Civil Rights and antiwar era. “Like other student activists of the time,” Shreve writes, “they steadfastly believed in the possibility of a moral universe and that it was their duty to make it a reality.” But they were also notably different. Unlike many Civil Rights youth groups, NIYC was started and run by students, and women were among its early leaders. Unlike some other prominent Native groups, its members were rooted in reservation and rural communities (mostly in the West) rather than cities, but it pioneered intertribal activism. It suffered all the convulsions and confusions of other activist groups that eventually fell apart, but NIYC managed to change and survive as a useful and innovative organization.

Though it was formed in a rebellious and youth-oriented spirit, NIYC kept faith with tribal elders, and made reviving traditional knowledge a key goal from the beginning. There were non-Natives elders, too, who were convinced that Native knowledge could benefit society as a whole, and they became part of the mutual education of decades.

It made its first big splash with the “fish-ins” in Washington State, primarily organized by Bruce Wilkie (Makah) and Hank Adams (Assiniboine), protesting the arrests of tribal members exercising their rights to traditional and subsistence fishing as guaranteed by treaties. But in its half-century or so, the organization also pioneered Native education, job training and placement, and defense of sacred sites.

Shreve’s chapters are skillfully crafted to tell an absorbing story, as individuals grapple with issues reflecting the unique history and circumstances of American Indians, from the Teddy Roosevelt and FDR eras through the tumultuous 60s and 70s. This book is informative and judicious (with good notes and sources) but enlivened by detail and reminiscence as well as point of view. It’s a deft and highly readable survey of an important but neglected slice of history, clarifying important connections to the present.
Posted by Captain Future at 2:53 AM No comments: