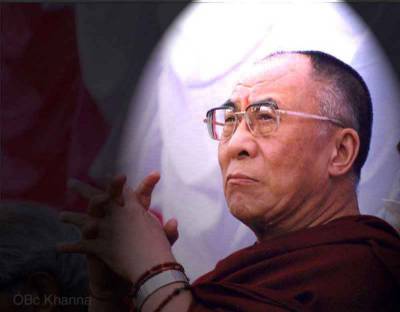 Posted by Captain Future at 11:22 PM No comments:

Dependent Arising: The Dalai Lama and the Scientists

The New Physics and Cosmology: Dialogues with the Dalai Lama
Edited and narrated by Arthur Zajonc
OXFORD UNIVERSITY PRESS; 256 PAGES; $29.95

Healing Emotions: Conversations with the Dalai Lama on Mindfulness, Emotions and Health

Sleeping, Dreaming, and Dying: An Exploration of Consciousness with the Dalai Lama
Edited and narrated by Francisco J. Varela
WISDOM PUBLICATIONS,1997; 254 PAGES; $16.95

Consciousness at the Crossroads: Conversations with the Dalai Lama on Brain Science and Buddhism
Edited by Zara Houshmand, Robert B. Livingston and B. Alan Wallace
SNOW LION,1999; 183 PAGES; $15.95

Gentle Bridges: Conversations with the Dalai Lama on the Sciences of Mind
Edited by Jeremy Hayward & Francisco Varela
SHAMBHALA, 2001; 272 PAGES; $17.95


When Charles Darwin proposed the crowning scientific theory of the 19th century, a wide public understood enough of it to passionately debate evolution and natural selection. But not even physicists today fully understand the similarly significant theories of quantum mechanics, first proposed early in the 20th century. With western scientific thought apparently at its limits, a group of scientists recently looked for help from a man who, until he was a teenager, believed the world was flat.

The resulting dialogue between Tenzin Gyatso, the 14th Dalai Lama, several other Buddhist scholars, and a group of western physicists and philosophers (including Tu Weiming, formerly of UC Berkeley) provides the substance and the narrative energy of physicist Arthur Zajonc's graceful and insightful new book.

This five-day conference at the Dalai Lama's compound in Dharamsala, India in 1997 was not the first or last of these conclaves. Since they began a decade earlier, there have been 11 discussions convened by the organization created to arrange them, the Mind and Life Institute. Seven books have resulted so far (though video DVDs of the most recent conference, at MIT in Cambridge last fall, are available from www.mindandlife.org.)

These are not the only books that have emerged from discussions between the Dalai Lama and western scientists (others include Worlds in Harmony from Berkeley's Parallax Press, and MindScience: An East-West Dialogue from Wisdom Publications) but the Mind and Life series is itself a kind of story, of continuing and fascinating cross-cultural collaboration---even a kind of convergence---on subjects suddenly of common importance.

Most of the conferences didn't deal with physics. They began with the mind. Though largely self-educated in western science, the Dalai Lama expressed keen interest in new developments in brain sciences and related fields, to test his belief that ethical behavior is inherent in human nature, and can be nurtured without reference to any religious doctrine. As leader of Tibetan Buddhism, he was also intrigued by what western science had to say on workings of the mind that Buddhist scholars and advanced meditation practitioners had been exploring for several thousand years.

At the same time, neuroscientists using new technologies were challenging old assumptions about the relationship of brain and body. Psychologists were trying to account for abilities to change physical states (such as body temperature) as specifically demonstrated by individuals adept at meditation, when such influences on the body by the mind was thought impossible. Western science had emphasized external influences, and was just beginning to investigate human life from the inside. So in various disciplines loosely grouped as mind sciences, some scientists were eager to experiment with more advanced meditation subjects, and they were ready to hear new points of view.

These attractive and carefully edited books chronicle this unique journey, though each is also self-contained. Gentle Bridges impressed me as a kind of crash course in contemporary mind sciences, while Consciousness at the Crossroads most eloquently explicates Buddhist thought, particularly in Alan Wallace's afterword. Healing Emotions and Sleeping, Dreaming, and Dying delves into research in those subjects and pertinent Buddhist thought, while Visions of Compassion investigates the growing scientific interest in altruism, empathy and the psychology of violence. These all turn out to be at the cutting edge of science in these decades.

The mood of the early conferences seemed eager but uncertain, with the scientists especially amazed by the Dalai Lama's scientific mind. Scientists exclaiming that his questions anticipate their next area of research, or otherwise demonstrate remarkable analytical acuity, is a recurring theme throughout these books. The Dalai Lama often repeats that if science can prove a Buddhist assumption wrong, it should be discarded. Trust is established as the Buddhists find the scientists both forthright and respectful, and the scientists appreciate the sophistication of Buddhist thought, which is based on rigorous training in logical debate as well as introspection. As Alan Watts noted elsewhere, "Buddhism is absolutely, fundamentally a dialogue."

While personalities percolate more obviously on video, they manifest in print as well: in questions, quick exchanges and presentations of doggedly systematic, briskly trenchant and passionately eloquent character. These dialogues had to navigate deeply different assumptions (just the differences between Buddhist enlightenment and the European Enlightenment is revealing), but the findings and methods of each tradition illuminate the other, so for readers these books become an education in both.

By the conference in 2000, the subject of Destructive Emotions, scientists were collaborating with Tibetan Buddhists in designing and conducting new laboratory experiments involving skills of advanced meditators to influence activities of mind measurable in the brain, and in designing educational programs on emotional literacy. Some scientists took their own research in new directions partly as a result of these dialogues. (Participants from the Bay Area include UC Berkeley psychologist Eleanor Rosch, UC San Francisco psychologist Paul Ekman, psychologist Jeanne Tsai and professor of religion Lee Yearly of Stanford.)

Along with Daniel Goleman's Destructive Emotions and Francisco Varela's Sleeping, Dreaming, and Dying,Arthur Zajonc's New Physics provides narrative that suggests the dramatic quality of the dialogues as well as the emotional impact of the conference experience. Physics became a topic partly because of the Dalai Lama's curiosity, but western scientists had their own reasons. Because quantum physics implies an apparently determining role for the human mind on the phenomena observed, it shatters western notions of objective reality. Tibetan Buddhism has been investigating the correlations of thought and reality for centuries. The nuanced Buddhist ideas of "dependent arising," which explore relationships of perception, expectations and reality, were particularly intriguing to both physicists and mind scientists.

The physics dialogue didn't create a new way of understanding quantum reality, but did suggest a path to it. The new physics and mind science both lead quickly to questions once considered the sole province of spirituality, and also to other traditions---not only to Buddhism, but as Tu Weiming points out, to indigenous thought such as "Hawaiian, Maori, and Native American." "I think the time is ripe for imagining a new kind of education," he asserts. "It is highly desirable, maybe even necessary, that this new education integrates the self-cultivation of the Buddhist and other traditions...It will enhance the communal, critical self-awareness of some of the most creative and reflective members of the scientific community. This is absolutely necessary for a new breakthrough."

For the Dalai Lama, the emphasis on the human mind's profound role in reality has an ethical dimension. "Therefore, the future of humanity is in the hands of humanity itself," he says, concluding the physics dialogue. "We have the responsibility to create a better world, a happier world, and a more peaceful world." These books illuminate just how deep, common and unavoidable a responsibility that is, even if we don't believe it.


Posted by Captain Future at 3:40 PM No comments:

Gentle Bridges: Conversations with the Dalai Lama on the Sciences of Mind
Edited by Jeremy Hayward & Francisco Varela
SHAMBHALA, 2001; 272 PAGES; $17.95

Readers shouldn't think this book is of interest only to Buddhist adherents of any school. In a series of presentations and dialogues, contemporary scientists---Newcomb Greenleaf, mathematician and artificial intelligence researcher; physicist Jeremy Hayward, neuroscientist Robert Livingston, biochemist Luigi Luisi, cognitive psychologist Eleanor Rosch, and biologist Francisco Varela---present a wonderfully succinct and relevant crash course in contemporary science from its methodologies to its latest findings (as of 1991) and their implications for questions that western science has in common with Tibetan Buddhist thought.

For it turns out that various schools of Tibetan Buddhism have been systematically investigating and building theories about the mind-how it perceives, what knowledge and thinking are, what the relationship of the individual is to common reality---for centuries. So this book reflects a true dialogue, in which western scientists and the Dalai Lama and other Buddhists present each learn from the other.

In fact, several of the scientists comment on how pertinent the Dalai Lama's questions are, often anticipating the next line of research they're going to talk about. "You think like a scientist!" one of them exclaims.

While the Dalai Lama explains the theories and explorations of various Buddhist schools with remarkably easy erudition, the emphasis of material in this book is on western science. This is the first of at least eight books emanating from conferences that the Dalai Lama has hosted with western scientists, on questions of mind. A much fuller presentation of Tibetan Buddhist theories of mind can be found in "Consciousness at the Crossroads," dialogues from the next conference, published by Snow Lion Press. The presentation and dialogue on the recent history of scientific theory pertaining to Darwinian evolution is especially valuable. There's more information about the series at www.mindandlife.org.

Personally I like dialogues, perhaps because I'm an aural learner. To me these books are like plays in the mind, about the mind. Some of these scientists know a lot about Buddhism already, while others know very little. But they all seem impressed by the long tradition of Tibetan Buddhists in investigating phenomena of mind, and in developing a sophisticated view of how mind relates to the universe. I'm sure they are heartened as well by the Dalai Lama's attitude that Buddhist doctrine is not dogma, and if science disproves these theories, they ought to be abandoned. But it's clear that western science has much to consider that Buddhist scholars have already thought about in a way more relevant to the most advanced western science than the science of even a few decades ago. Together they may help answer perennial questions about humanity's role in the universe. Maybe even the meaning of life, the universe and everything.

Posted by Captain Future at 3:36 PM No comments: