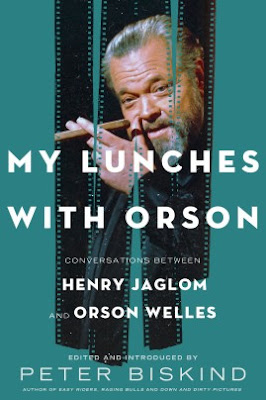 First the cast of characters: Legendary and iconic actor, theatre director and filmmaker Orson Welles.  In his final years in the 1980s, he lunched at Ma Maison in LA with the then young entrepreneurial director Henry Jaglom, who tape recorded their conversations from 1983 to 1985, the year Welles died.  Peter Biskind is a former magazine editor and author of books and articles on film and filmmakers.  He made a book of the edited transcripts, and this is it.

Which is where we start, with its ambiguities and uncertainties.  Does our first scene begin with Welles requesting that Jaglom tape these conversations, but keep the recorder hidden in his bag so he isn't distracted, as Biskind claims in his introduction?  Or, as Oja Kodar, Welles' life partner for his last 24 years and the person now in charge of his estate claimed to a reputable source, with Welles peering into Jaglom's bag to find a tape recorder, realizing Jaglom is taping these conversations without his knowledge or permission, and feeling betrayed?

We might actually start in the editing room, for as Biskind acknowledges, this is more than a transcription.  Biskind subtracted and also added, sometimes from other sources.  "Welles ruminations on like subjects, in fact separated by months or even years, have been grouped together."  We must hope that he took into consideration that people's opinions and even recollections change over years or even months.  Biskind  changed some of Jaglom's dialogue. His purpose was to present "Welles unguarded and relaxed, with his hair down."

Which brings us to the possibly unreliable narrator.  Is Welles an accurate reporter of events he witnessed, an accurate reporter of what people said?  That some of the stories he tells have made it into previous and otherwise reputable books (his assertion that FDR told him that "you and I are the best actors in America" appears in William Manchester's history, The Glory and The Dream)  is not complete proof, especially when he is the only source.  After all, he was a storyteller.

And then there's the missing context of just how serious he was being in his assertions--was he saying outrageous things just for the sake of lively conversation, or as a devil's advocate?  Guess you had to be there, and even then...

What might have made a really valuable book is suggested in the introduction, when Biskind quotes advice Welles gives to Jaglom about his relationship with his crew on his first big movie, which Welles appeared in.  It's a fascinating view into practical film making.  Unfortunately, it's one of the few moments that actual film making is the topic.

Welles' provides a lot of opinions and evaluations, and some insider anecdotes that may be of interest in proportion to the reader's interest in the people he's discussing. But much of the book is simply gossip, and not even gossip about people that a lot of readers today care very much about, though they were icons of the past.  What Welles said about Spencer Tracy as a diabolical Irishman certainly runs counter to Tracy's reputation, and may well reveal a side to him, but who much cares?  We have the performances.

The mystery of Orson Welles is: how did such an awesomely multi-talented theatre and film artist, who made arguably the greatest American movie of all time in his mid-20s (Citizen Kane has led such polls for decades, until recently displaced by Hitchcock's Vertigo, a film Welles disparages in these pages), spend the last decades of his life being unable to finance or finish a film?  The middle period--frustrated by the Hollywood studios he'd offended, but still able to act in and direct both studio and independent classics--is at least comprehensible. His low budget Shakespeare films, flaws and all, are monumental.  But what about that Hollywood ending?  Generally lauded as America's greatest filmmaker for at least the last several decades of his life, why was there no redemptive final film?

Here and there, the conversations as presented in this book suggest possible contributing factors, including Welles' undermining insecurities and understandable sensitivity to yet more rejection.  These are the most painful and human moments.

There are informative passages, as when Welles describes European reception to his work (much greater than in America) and when he describes the strain of directing.  But though he talks about people he admires, these pages have him talking much more about people he loathes, thinks are overrated or just awful, or who have betrayed him, or all of the above.  While all of that might well be justified, it doesn't make for inspiring reading.

As a document of Welles' last years, this book may have value, assuming it is an accurate representation.  As a reading experience, it's too long for the form (though I acknowledge that others may have a greater appetite for dish.)  Structuring the most important content of  these conversations with context and some reporting seems to me a more fruitful approach than this.  Jaglom certainly comes off well, which isn't surprising, given that he is the source of the tapes.

Biskind's unevenly written introduction summarizes Welles' career while a selection from the cast of minor characters is included as an appendix, though again, if you don't know who he is, or who they are, why do you care what he says about them?  Scholars might, but for their purposes this book probably doesn't provide enough support.  It feels rushed and unfocused, like wine that's sold before its time.
Posted by Captain Future at 12:02 AM No comments: