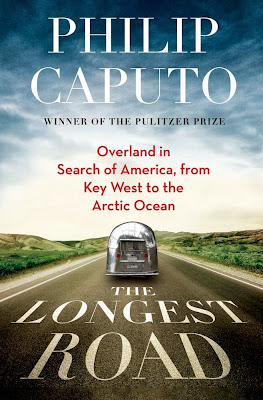 The Longest Road:
Overland in Search of America, from Key West to the Arctic Ocean
By Philip Caputo
Henry Holt

Of  previous books about traveling across the country in order to write about it--several of which Philip Caputo mentions in his--I thought immediately of John Steinbeck's Travels With Charley.  I remembered it fondly from adolescence and I felt compelled to reread Steinbeck before I got far into this book.  There are similarities in how they did it but the differences suggest the altered America that Caputo found, some 60 years later.

Both men were on the farther side of 50. Steinbeck set off in his custom-built truck, alone with his dog Charley.  Caputo borrowed a reconditioned Airstream trailer (built the year Steinbeck's book was published) to tow behind his truck, and doubled the number of dogs.  Steinbeck wrote about missing his wife, Caputo brought his wife with him, and wrote about the tribulations and rewards of doing so. She's Leslie Ware, herself a writer and editor.  Though he wrote the book, there is the sense that it involved their combined observations.  The experience of the road involves their partnership, with its irritations, triumphs, compromises, and different perspectives.  That turns out to be appropriate for the America they found.

The lone consciousness of Steinbeck found things that worried him and things that inspired him; changes for the worse more often than for the better perhaps.  But the America he described was far less diverse in many ways that the one that Caputo explored.  He found that diversity not in the expected cities, but in Grand Island, Nebraska, where meat packing plants first attracted Mexican workers, but when the heat came down on undocumented workers, the factories searched for legal immigrants and attracted Sudanese and Somalis, willing to work under worse conditions and for less money.  Caputo met people who resented this, and people who lamented the tensions in a formerly peaceful place.

While racial strife was more active in the South at the time of Steinbeck's travels, racial polarization seems more culturally insistent in Caputo's experiences.  A lot of this can trace back even further, to what happened with one group Steinbeck ignored but Caputo writes about at length, at least in historical terms: Native Americans.

So this is a complex book about a complex country, full of personal narrative (food, vehicle and dog trouble, etc.) and observation, but also history. The telling however is pretty straightforward, and Caputo can turn a phrase. He writes about people he met that gratifyingly defy stereotype, and people that unfortunately flesh out stereotype.

The trip officially began at the southernmost tip of America in Key West and ends at the northernmost in Alaska, with stops at the official and unofficial centers of the contiguous states.  Since they are traveling in an Airstream they particularly experience the subculture of the RV parks.  At one point Caputo laments that these seem to be the only travelers now--no more Kerouacs out there on the road.

Like Steinbeck, Caputo chronicles the fading of rural farm culture, though in Oregon he checks his own skepticism about that new phenomenon, the wind farm.  He also notes without belaboring it the various evidences of climate change--the swollen rivers and floods, the droughts returning parts of Oklahoma to dust bowl conditions.  All in all, this book is a worthy successor to the best of its predecessors.

It ends with Caputo returning his Airstream to a woman in Texas.  He's been asking the question: what keeps Americans together? He speculates that it's conflict--which he's seen--and uses an elaborate astronomical metaphor.

But when he asks the same question of his hostess she has a more straightforward theory.  "Hope," she said. "Isn't that what it's always been?"  It's the perfect line to end the book, and too good to pass up as the end of this review. Sorry about that.
Posted by Captain Future at 2:56 AM No comments: