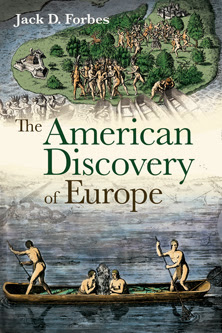 Posted by Captain Future at 11:21 PM No comments:

Did Columbus discover America, or did America discover Columbus? Did Columbus meet Native Americans for the first time in 1492 when he sailed the ocean blue—an event marked today by Columbus Day—or did he meet two American Indians 15 years earlier, in Ireland? And did that meeting inspire him to make his voyages?

That’s one of the contentions and suggestions that run counter to the history we think we know in this book by Jack D. Forbes, professor emeritis of Native American Studies and Anthropology at UC Davis. How did these Indians get to Galway Bay? Forbes marshals evidence to show that Natives of the North and South Americas had impressive maritime traditions and skills, and knowledge of the strong ocean currents that led to Ireland, among other places. They may have been following migrating American sea turtles there for centuries. Forbes mentions in particular the Red Paint People from Maine who left evidence of their sea travels and culture in Norway and elsewhere.

Native seafarers from the Caribbean and the East Coast of North America are most likely to have made it to Europe, by design or stormy accident, though Inuits probably got to Scandinavia and perhaps the British Isles. Forbes believes that tales of mermaids, mer-men and of “fin-folk” in Scotland and Ireland could be based on Inuits who wore the same skins as covered their kayaks, and seemed to be one with them. He cites evidence of Arctic culture in early England.

Later on, before slaves were brought to America, Native Americans were taken to Europe as slaves. For a century or so after Columbus, there may have been more Indians in Europe and Africa than Europeans over here. Forbes suggests that over the centuries Native genes became part of the pool in Africa and all over western and eastern Europe.

This book is not the only one that calls into question much conventional wisdom, from the actual age of humanity and the theory of migration from Asia to America across the Bering land bridge, to the idea that Native Americans were isolated, didn’t have seaworthy boats, including sails. Vine Deloria, Jr. is especially caustic on several of these topics in Red Earth, White Lies, for example. While Forbes is not as entertaining a writer as Deloria, he engages in careful and original scholarship, and brings a Native eye to what non-Natives miss in the available evidence. (There’s ethnicity in science, too, Deloria points out.)

Much of the relevant evidence for any theory on these topics is often pretty scanty, and as I know from previous reading (like The First Americans by Adovasio and Page) the state of actual knowledge about pre-history and early migration, as well as these aspects of history, is precarious and messy. And “established” conclusions are jealously guarded, not to be confused by new facts. So the best message from Forbes’ book for non-scholars may be: don’t be too sure you know what you think you know.
Posted by Captain Future at 11:10 PM No comments: