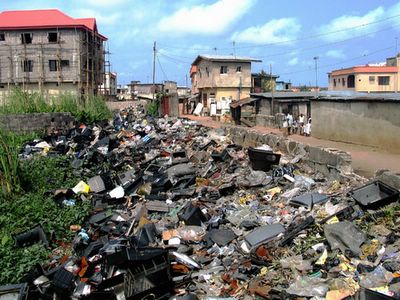 Posted by Captain Future at 12:24 PM No comments:

As Steven Wright famously said, "You can't have everything. Where would you put it?" So you get rid of the old stuff, but what makes it old? The idea of products built not to last irks us, but for a variety of reasons we routinely discard devices that work just fine. Obsolescence by any other name has helped nourish a sweet economy, but a hidden cost is coming due fast, in the poisonous waste quickly overwhelming the world's capacity to deal with it. 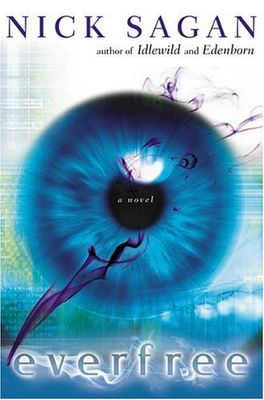 Posted by Captain Future at 2:05 AM No comments:

Saving Humanity: a Dirty Job for Post-Humans in the Post-Apocalypse

In the future of Nick Sagan’s science fiction trilogy which concludes with this volume, humanity has been wiped out by a plague called Black Ep, except for some bioengineered children kept in the dark of a Virtual Reality world, and caches of “frozen” survivors awaiting the day their “posthuman” experimental children find a cure and thaw them out.

In idlewild, we met the children as adolescents, as they discovered that their virtual reality fantasy world and their “real world” were the same. They rejoin the empty husk of a devastated planet, have progeny of their own (in various ways),face a second plague and eventually find the cure in volume 2, edenborn. There are losses, crimes, passions, discoveries, deaths and illuminations along the way.

In volume three, everfree, Rebirth and Response is followed by Recovery, as the remaining posthumans, now in early adulthood, revive and cure the survivors, and try to supervise a shaky new world.

Fans of idlewild will be happy to find that the boy who calls himself Halloween, that book’s main character and voice who was largely absent from the middle volume, is back in charge in volume 3. But in one of this trilogy’s many achievements, not so usual in science fiction, he is demonstrably matured. The fire of the cyber-punk is still there, however, and that fuels a forward momentum in this tale’s telling, more like idlewild than the more measured polyphony of edenborn.

For a trilogy set in the same consistent universe it creates, these three books are remarkably different in style and narrative approach; the style and the events of each are part of their separate visions as they fit into the larger development of this story. Everfree has what a concluding volume must (concluding, but not necessarily the last in this universe---the ending has some openings for more): a fast-unfolding story, lots happening and developing, plot and character questions answered, and fates resolved, at least for now.

Without giving too much away, Sagan’s vision of this future is annoyingly realistic: the humanity that gets unfrozen consists of the people rich enough to afford the process, and so they are the neurotic connivers and self-important spoilers of a decadent autocracy. Something like waking up the dregs of Halliburton and the Bush billionaires, combined with the spaceship of castoff p.r. flacks, interior designers and middle managers that originally populated the earth in Douglas Adams’ Hitchhiker's Guide to the Galaxy mythology. Plus the soldiers they had frozen with them—a nice pharaohic touch. It makes sense, unfortunately.

Halloween---now a non-computerized Hal—is chief of security, the Worf in this world of revived wolves. The posthumans try to institute a better society, but it takes some tricks to pull it off, barely. That’s all I’ll say.

There are surprises and twists to keep the pages turning, especially in the book’s first and third sections, with a reprise of the multi-voice character study of the middle volume in between, recapitulating the trilogy’s form. Hal’s voice is strong and his take on things is fascinating, but the book speeds forward on punchy, pithy dialogue, detective novel-style. At the same time, there's impressive erudition and philosophical teasings that keep things moving on other levels. In one sense, everfree explores humans as political animals.

As for the driving ideas, I’m not sure I buy Nick Sagan’s interpretation of evolutionary genetics (too much chimp and not enough Bonobo, if you catch my drift. If not, check out Frans de Waal’s Our Inner Ape, which not only shows that nonviolent conflict resolution and even compassion are genetically dominant in Bonobos, but that more aggressive chimps can learn these techniques.) But the actual action is totally believable.

Exploring the nature of freedom seems part of the action as well, and in the end there is a sense of freedom as just another word for nothing left to win, which I'm also not sure I buy, but it sure is interesting.

But this isn't a philosophical postcard from the post-apocalypse: it's a novel. Beyond the satisfying plotting and storytelling (including a slapstick scene involving the original Bill of Rights) the character development, particularly of Hal, is most impressive. Sagan’s handling of character has grown enormously since idlewild, which had great young characters but was a little shaky otherwise. Edenborn was valiantly successful in creating non-western characters with non-whitebread American sensibilities (as well as a classically creepy yet thoroughly contemporary female villain.) Everfree sketches a panoply of new adult characters with a sure hand, as well as convincingly following the maturing lives of figures familiar from the previous two books.

I suppose edenborn is still my favorite (for the writing and several characters that exist only in its pages) but this is a close second. It’s the most provocative, especially when one ponders what trying to build a better society after the apocalypse might really be like.

This book has all the pleasures of a good adventure story and a science fiction novel, even apart from the previous books. But in context of the triology, there are multiple rewards in character as well as action and ideas that pay off in this volume. Everfree is an exciting ride through an imaginative and believable world, with ideas to ponder, characters to wonder about, and good writing to savor. And the ending is definitely worth the ride, though don’t be surprised if you still want more.
Posted by Captain Future at 1:25 AM No comments: