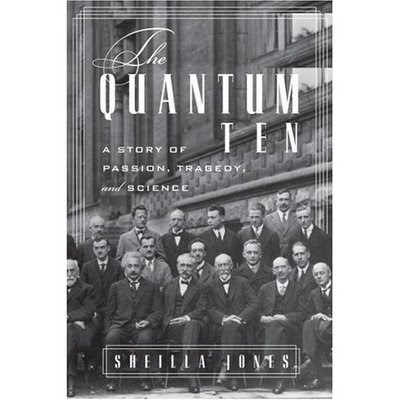 The theorists who looked for the ultimate secrets
of physics, and uncovered an enigma:
review of The Quantum Ten by Sheila Jones.

Posted by Captain Future at 8:00 PM No comments:

“How can you be in two places at once, when you’re not anywhere at all?” When the Firesign Theatre performed that vaudeville parody, they expressed a central conundrum of quantum physics without really trying. A lot of mischief flows from the finding that, at least at the sub-atomic level, an object is created in a specific place by the act of observing it there. Now you see it; therefore, it is.

This might be dismissed as laughable theorizing by ludicrously loony scientists except that at least a third of the U.S. economy results from the highly dependable predictions of quantum mechanics, including DVDs, MRIs and the microchips in all the devices that run our lives.

Early in this book, author and science journalist Sheila Jones offers some very useful definitions. “Quantum mechanics” refers to the highly reliable “set of rules for how the physics and mathematics are used to make testable predictions.” “Quantum theory” delves into the “why,” while “quantum physics” most properly refers to both the how and why. It’s the theory that leads far and wide, into the relation of consciousness and reality, and feeds the speculations in that popular “What the Bleep” movie. The mechanics just work, and for a lot of physicists that’s all they care to know.

This book is about the ten scientists (all European men, including Einstein, Bohr and Heisenberg) who produced the insights and formulas in the 1920s that comprise quantum mechanics as still practiced today. But they were bedeviled by the implications, because by the standards of classical physics and “common sense,” those implications were crazy. And that, as well as the high achiever pressures that rewarded the successful with prized professorships and Nobel Prizes in a very turbulent Europe between the wars, drove some of them nearly or entirely nuts.

The historical context itself is fascinating, especially among the Germans, who had to deal with super-inflation (by the time one absentminded professor remembered to pick up the cash his family sent to his bank, it would be worthless) and the rise of Nazism (among the Ten were several Jews, and one declared Nazi.)

I’m a sucker for books like this, dramatizing scientific discoveries I don’t fully understand through the process and the people that make them. Ten main characters—plus their wives, affairs, relationships with each other-- are a bit hard to keep track of, and the prose is overheated at times. But there is plenty of fascinating detail.

The author made a good decision in using a relatively unknown name—Paul Ehrenfest—to connect stories about the major players. As a physicist, Ehrenfest was a talented analyst and critic, valued by theorists and innovators for his perceptions. He was also more or less the social director for the “quantum ten,” hosting many of them at his home, and even bringing together two of the greatest—Einstein and Bohr—for time alone together to talk about their theories. They didn’t wind up agreeing on the major questions, however.

Ehrenfest was sociable and enthusiastic, so his own tragic fate is also interesting as a talisman for the pressures they all were under.

The actual science is perhaps not quite as well told (and certainly not as extensive) as in an earlier Oxford book, The Quantum Enigma by Bruce Rosenblum and Fred Kuttner, who teach down in Santa Cruz. But this well-researched narrative provides a fascinating window into the messy ways that science happens.

Out of this human and historical stew came ideas that have thrown physics into a tizzy ever since, resulting in a field that even its most famous practitioners admit they don’t understand, and in further explanations like string theory that nobody knows how to prove. Yet there is the tantalizing potential for eventual understanding that goes beyond physics to life, the universe and everything.
Posted by Captain Future at 7:57 PM 2 comments: