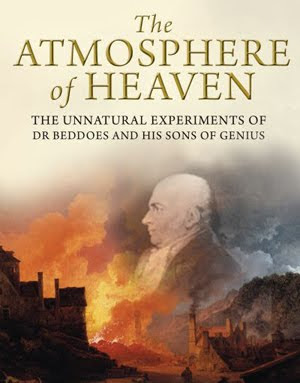 The Atmosphere of Heaven is one of a trio of related books that combine biography and cultural history to be considered for gifts this year, described in the post below.
Posted by Captain Future at 6:33 PM No comments:

They're a combination of biography and cultural history, and all the more fascinating for that. Moreover, read in sequence they have a lot to say about the nineteenth century, particularly in England. All three deal with science and scientists, while two relate directly to the arts and politics of the day.

The most obvious pairing begins with The Atmosphere of Heaven: The Unnatural Experiment of Dr. Beddoes and His Sons of Genius by Mike Jay (Yale.) This is a detailed and fascinating look at the earlier part of the century, when the effects of the French Revolution were shaking up English politics and culture. Though centered on the relatively (and unjustly) unknown Thomas Beddoes, the cast of characters includes Coleridge, James Watt, Thomas Wedgwood and Erasmus Darwin, Charles' grandfather. Beddoes, Darwin and several others were polymathic Renaissance men by today's standards, and they deeply influenced the arts as well as sciences.

Author Jay quotes Darwin writing that Beddoes epitomized this era's "age of wonders." The Age of Wonder: How the Romantic Generation Discovered the Beauty and Terror of Science (Pantheon) by Richard Holmes more or less takes up where Jay leaves off historically, following the mid 19th century Romantic poets (especially Shelley) and their connections with the science of their day, reflected in their work (Mary Shelley's Frankenstein, not the least.) Holmes is the better known and more reviewed book. The two make a fine pair.

The scientific figure who tends to focus the mid 19th century for today is of course Charles Darwin, whose theory of evolution by natural selection remains arguably the most consequential theory even in the 21st century so far. There were lots of books on Darwin this year, the 200th anniversary of his birth, but I particularly liked The Young Charles Darwin by Keith Thompson (Yale) for its clarity about a part of Darwin's life that hasn't been widely examined. It provides a more focused look on the science of the day.

All three books suggest what an adventure it was to be involved in the arts and sciences then, with opportunities for insights and achievement as new discoveries cascaded, science was changing rapidly and was defining itself. These books suggest what was gained but also what was lost now that science and art are so separated, and it is so much more difficult for anyone to have any comprehensive sense of significiant discoveries, how they relate, and what they mean in the larger sense.
Posted by Captain Future at 6:07 PM 2 comments:

Science has its own dogmas. Sometimes the dogma is a powerful prevailing theory with a superstar and institutionally well-placed adherents, or more often a set of biases based on a longstanding theory that determines how science is organized and done.

Lately, the prevailing dogmas of neo-Darwinian evolution that continued the bias towards the "struggle for survival" of individual organisms has been challenged in a number of life sciences. The growing power of neuroscience is beginning to shake things up as well. The outcome so far is an impressive if still fairly primitive movement towards recognizing what we call empathy, altruism and cooperation that have long been observed, though those observations were often ignored or discounted.

The Social Neuroscience of Empathy collects reports on multidisciplinary research with neuroscience heavily in the mix, as these sciences (including various branches of psychology research) to some extent reorganize themselves. These reports generally support the existence of empathy, often through neurological research, for example following the discovery of "mirror" neurons.

Why We Cooperate presents a report by evolutionary anthropologist Michael Tomasello on his research with chimps and human children, and a series of responses by another anthropologist, two psychologists and a professor of logic and philosophy. Tomasello's basic finding is that altruism and the urge to cooperate exist naturally--not just culturally.

Both of these books seem to be part of a movement--a slow or a fast one, depending on your point of view--away from a strictly individualistic (and perhaps baldly genetic) bias towards recognition of the importance and function of the social in survival.

The Social Neuroscience of Empathy is more technical, a bit more densely written though still accessible to the careful reader. However it does appear to be more of an insider challenge, and a resource for scientists and science students. This intent is reflected in the physical book--sturdy binding, slick paper, it's built to last on the office shelf and be passed along through a few generations of students. It is an impressively useful volume, readable in its efficient prose and relatively modest length.

Why We Cooperate is even more accessible to the general reader, and clearly is meant to be. As a book, it is small and handy, about the size of a quality paperback but a sturdy and handsome hardcover. It's the kind of book you want to carry around. The prose within it answers this invitation--from Tomasello's essay to the responses, it's close to conversational, though it's a logical and informed conversation.

Readers will find entering that conversation inviting, or at least this one did. There is some eye-opening research presented in both these volumes, though the limitations of such research are also exposed. Of all the motivations for children cooperating in games, for example, I didn't detect much awareness that they are doing it because it's fun. A game without rules everyone cooperates in maintaining just isn't fun. Lots of animals play. Even scientists. Maybe they could augment their laboratory experiments by playing with children, and later, reading some literature. Lots of science I read in this field seems to be painstakingly and awkwardly coming to conclusions that storytellers came to long ago, and then announcing it timidly, as it is might be received as heresy.

The Social Neuroscience of Empathy will interest students of neuroscience and psychology. It's also one of those landmark books that's apt to become a kind of classic in the field, until (and if) the next steps are taken. Why We Cooperate is for an intelligent but at least somewhat wider readership, as well as those in fields of psychology, evolution and child development. Together they are part of a dogma-slaying new paradigm with far-reaching implications for how humans think about themselves and their roles in the world.
Posted by Captain Future at 5:01 PM No comments: 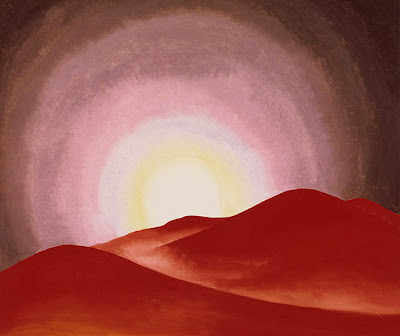 An O'Keeffe Christmas? A new book on Georgia O'Keeffe is a top contender for art gift book of the season. See post below. The painting is The Red Hills with Sun (1927.)
Posted by Captain Future at 12:43 AM No comments:

This coffee table sized book is officially the catalog of an exhibition of this name, cosponsored by the Whitney Museum of American Art, the Phillips Collection in Washington and the Georgia O'Keeffe Museum in Santa Fe. Gorgeous color illustrations of familiar and less well known but often even more spectacular works provides only one reason for O'Keeffe fans to want this book. Edited by Barbara Haskell with her usual rigor and taste, and with essays by Haskell (one of my favorite writers on art) as well as Barbara Buhler Lynes, Bruce Robertson and Elizabeth Hutton Turner, it tells a compelling story of O'Keeffe's development as an artist within the context of her times.

For the idea of abstraction in art was just blossoming as O'Keeffe was discovering it, and this young woman from the hinterlands pushed it further in some respects than more vocal and renowned artists of the world's art capitals. Haskell's opening essay tells this compelling story, which also defines O'Keeffe's formal contribution: "As would often happen over the course of her career, a visual image, sound, or experience would trigger intangible, inexplicable emotions, which she would try to clarify for herself through shape and color."

This volume also includes photos of O'Keeffe by Alfred Stieglitz, including the nudes. What might seem at first cynical glance as an attention-getting addendum is justified by the importance of these photos to O'Keeffe's own work, as she followed them through the process, learning about creating and focusing images with cropping, and by studying the forms in the photos themselves. She later had to downplay these photos, and her relationship with Stieglitz, to shift her image to an American artist rather than a woman artist.

This book is delightful in every detail. Its references are orderly and informative, and the essays are user-friendly (the pictures are most often very near the text discussing or referring to them.) Its illustrations are sumptuous, and both words and pictures tell an absorbing story, with wonderful use of O'Keeffe's letters. So it is the perfect gift book for both the casual and serious O'Keeffe admirer, as well as for those interested in twentieth century art and American art.

Yale Press has also recently published another O'Keeffe book which I haven't seen: Dove/O'Keeffe: Circles of Influence.
Posted by Captain Future at 12:07 AM No comments: