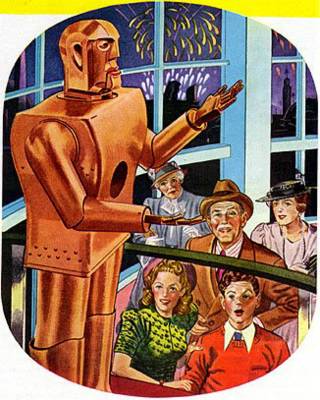 Posted by Captain Future at 11:42 PM No comments:

Our concepts of evolution, progress and the future all emerged from the same 19th century crucible. This anthology of essays plus some poems and pictures addresses questions they raise for us today, in science, culture and everyday experience. But it does so, as the title implies, through the revelations of the writing process, focused in one way or another on the natural world. Even the best collections are usually either good reading or incisive treatments of an important and neglected subject. This anthology is both.

There's plenty of variety in treatment and subject matter--- the scientific, metaphysical and metaphorical concepts flashing by in Dorion Sagan and Jessica Whiteside's aptly named essay, "Prismatic Progress," Valerie Hurley's memoir of ordinary life in the invisible shadow of nuclear weapons, Floyd Skloot's riveting tale of a son's dance with destiny in the living mythology wrought by ESPN and the NBA--- but the book leaves an overall impression of important matters approached with passion and humility. Even the essays centered on philosophical and historical concerns are generally grounded in place and time, and the writer's own life.

While the technological future of speeding into the unknown is explored in Joan Maloof's exegesis on Deevolution and Transhumanism and Kevin Warwick's startling account of joyfully turning himself into a cyborg, the growing recognition for the need to also include the pace of ancient wisdom is acknowledged in Stephen Miles Uzzo's evocation of knowledge lost forever as Native American petroglyphs and the elders who study them disappear, Carolynne Baker's description of a city's evolution in Vietnam, Andy Couturier's portrait of a Japanese artisan whose teacher is a Tibetan monk, and Richard Norgaard's essay on coevolution.

The work in this volume is of such high quality that it's unfair to name only a few authors, but I will: the essays by Theodore Roszak, Leslie Van Gelder, Kristjana Gunnars and David Petersen are especially outstanding, as are the poems by Ricardo Pau-Llosa, John Canaday and the verse by Buckminster Fuller that ends the volume perfectly. The editors have organized and orchestrated a book that will delight the reader racing through it or savoring it a little at a time, and it will certainly repay return visits. Well-framed by the editors' introduction, this exemplary anthology explores but does not exhaust its subject, while it rewards but does not exhaust its readers.

A shorter version of this review appears in the San Francisco Chronicle Book Review of June 20, 2004.

Posted by Captain Future at 3:56 AM No comments: