“Drop City” is the title of a 2003 fiction by well-known novelist T.C. Boyle, about members of a 1970s Sonoma County commune. Boyle apparently appropriated stories (or legends) from a commune in Sebastapol (the Morning Star Ranch), and other communes in Marin County and San Francisco. But one place his novel is not about is Drop City.

The community that called itself Drop City was near Trinidad, Colorado. One of its founders, Eugene Bernofsky, described Boyle’s novel as “total bullshit. It was nothing like that.” The novel, and the interest of freelance journalist Mark Matthews, apparently sparked Bernofsky (by then a postman and surprisingly effective environmental advocacy filmmaker in Missoula, Montana) to cooperate in setting the record straight.

The first surprise is the name. To “drop acid” was 1960s argot for taking LSD. The expression “dropping out” as in dropping out of society goes back to at least the 1950s. But Bernofsky claims that “Drop City” referred to neither.

It didn’t come from Greenwich Village or Haight-Ashbury. It was an idea hatched among art students at the University of Kansas in Lawrence in the early 60s. Inspired by Jackson Pollock’s “dripping period” paintings, they literally dropped things from a loft window onto canvas on the street. They called themselves droppers. They saw this as antidote to art world elitism and solemnity, but also as a way of making art spontaneously and unconventionally, using the materials of ordinary life and involving spectators with surprise.

In their loft and neighborhood, Bernofsky and friends merged art and life, scavenging for both, and creatively recombined the detritus of the affluent society. The next step was founding a community on these principles: Drop City.

Later Bernofsky would write a lexicon for a Drop City newsletter:  “Drop City—to sponsor and create the avant-garde of civilization, utilizing all the remnants, at least of art, science, technology, etc.  Dropping—an elaborate put-on.”

Matthews’ very readable book chronicles Drop City’s intense life, from 1965 and the building of its unique structures using castoff materials and creative designs based on Bucky Fuller’s geodesic dome, through its sudden notoriety when it got publicized as a hippie commune during the national media frenzy a few years later, to its implosion from internal strife and confusion soon thereafter.

It’s not actually a long story, so Matthews often takes side trips to summarize what else was going on at the time, plus the history of utopian and intentional communities, a history of LSD, etc. As it turns out these side trips are interesting in themselves, and together serve as a pretty decent brief guide to the 1960s, even for people who were there.

The book also benefits from a colorful central character—Eugene Victor Debs Bernofsky, who in 2004 was living in Missoula, Montana, working as a postman while making environmental advocacy films on his own that nevertheless have been instrumental in getting some environmental degradations stopped. He is a raconteur who hasn’t lost his enthusiasm for “dropping.” He first told Matthews he’d majored in radiation biology, which he later admitted didn’t exist. Matthews hadn’t checked it, and neither had the Kansas University alumni magazine that printed it. Though Matthews did his journalistic due diligence, he wisely allows Bernofsky’s colorful personality to come through.
Posted by Captain Future at 12:11 AM No comments: 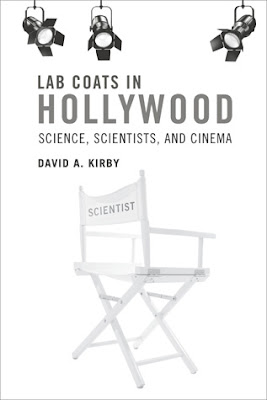 by David A. Kirby
The MIT Press

From Fritz Lang’s Woman on the Moon in 1929 through Iron Man 2 in 2010, Hollywood filmmakers have hired real scientists to work on their scientific fantasies. David Kirby looks at the phenomenon from a scientific point of view: what do consultants do, and what do they and the filmmakers get out of the relationship?

Why first of all do filmmakers hire science consultants? The most important reason is because scientific accuracy adds to a film’s credibility and makes the movie more believable. This (and some other observations) will be familiar to readers of The Making of Star Trek (Stephen Whitfield with Gene Roddenberry, 1968) and similar books and articles since. But Kirby drills farther down to find some revealing distinctions.

According to Kirby, audiences expect widely known scientific fact (what he calls “public science”) to be accurate. Audiences like cutting-edge science and especially up-to-the-minute portrayals about how scientists work (“expert science”) because it’s new. But audiences also expect their beliefs about science to be included (“folk science”), regardless of accuracy. Like a laboratory always must have vials of bubbling colored liquids, even when real ones don’t. Or the surface of Mars has to be red (because it’s the Red Planet) even if photos show it isn’t.

But even “public science” is relative. Lang’s Woman on the Moon showed people strolling on the moon’s surface without spacesuits mostly because filmmaking technology wasn’t up to showing facial expressions behind helmets, crucial in a silent movie. But in 1929 they could get away with it, because few non-scientists knew the moon had no atmosphere. Otherwise, great care was taken to portray rocketry in a plausible way—and (in some ways unfortunately, since this was Germany) this movie did that.

Sometimes the science consultant’s advice results in a visually arresting scene (the Enterprise coming out of the rings of Saturn to avoid detection in the 2009 Star Trek) or even actual drama (the volcanic vents on the asteroid in Deep Impact that created a fatal accident.) But scientific advice is just as easily rejected. Maybe it’s technically impossible or too expensive, or just not dramatic enough. Filmmakers differ on these judgments: while Deep Impact mostly listened to their scientists, the other asteroid-threatening-Earth movie, Armageddon, mostly didn’t.

Scientists may feel used, particularly when their advice was unheeded but their participation is exploited in publicity. But they can also benefit. Jack Horner’s controversial theories about dinosaur evolution got a major boost, even within science, by being dramatized in Jurassic Park. Starting with Lang’s 1929 Woman in the Moon and Destination Moon in 1950 and Kubrick's 2001 in 1968, movies made space travel seem possible and exciting.

Scientists working with filmmakers to fashion the physical results of a theory may see new things that helps them refine the theory or the technology itself. (Movie spacesuits have inspired real ones as well as vice versa.) Probably the best example of a mutually beneficial feedback effect is one Kirby doesn’t describe, because it began not with the movie Contact, but the novel. Author Carl Sagan asked physicist Kip Thorne how traveling across the universe and coming back a few minutes later might really be possible. This led Thorne to develop his highly influential theories about wormholes. Thorne then became a science consultant for the movie Contact—and years later Thorne wrote his own Hollywood movie further dramatizing his theories: Interstellar, coming to a theatre near you in 2013.

Both science and the public benefit by seeing the dramatic and visual consequences of science and scientific theories, even if the science is not totally accurate. Kirby discusses the expectations and impact on awareness and public policy of films like The China Syndrome and The Day After Tomorrow.

But does care with science pay off? While Ang Lee’s 2003 Hulk tried to furnish at least a scientific theory for all its comic book characteristics, the 2008 Incredible Hulk film made no such attempt, but did slightly better at the box office. So who knows?

Readers may be surprised at what movies overruled scientists (Steven Spielberg convened a panel of futurists for Minority Report, but thought some of their ideas were too futuristic for audiences to understand) and wonder what in the world filmmakers had on their minds to hire a science advisor for Watchman II. But if you’re into these movies the subject is fascinating anyway.

Though he is a lecturer in science communication studies in England, Kirby actually can communicate on the topic, with a minimum of jargon, a modicum of theory, and some sharp, informative writing. There’s some of the academically necessary stating the obvious, but plenty of good reporting. Besides, his backlot revelations about specific movies inspire seeing them again with this information in mind. For sci-fi and science-based adventure film buffs, always a good thing.
Posted by Captain Future at 12:32 AM No comments: 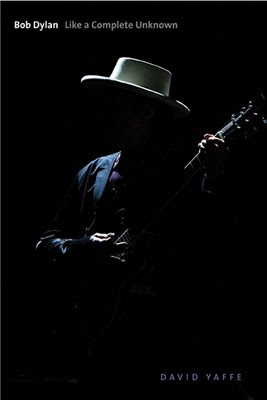 Music critic and professor David Yaffe, who seems to have made a mini-career writing about Bob Dylan, has produced a carefully considered and basically fair-minded set of essays that offer some provocative perceptions and stylish writing. He apparently did not interview or even casually speak with Dylan or anyone else. So his insights and thematic narratives are derived from studying the texts—the music, films, books and so on.

This book is in four sections, offering perspectives from four different standpoints: “The Cawing, Derisive Voice” centers on Dylan’s singing, “Screen Test” examines movies by and about Dylan, “Not Dark Yet” is about Dylan’s relationship to African Americans and their music, and “Don’t Steal, Don’t Lift” is about the complicated questions of Dylan’s use of sources: appropriation, inspiration or plagiarism, depending.

The question of plagiarism, made public by Joni Mitchell in 2010, is also discussed in Lewis Hyde’s Common As Air. That Dylan’s first 70 recorded songs allegedly had clear predecessors and two-thirds of the melodies were directly lifted may be (as Dylan said) common to the “folk process.” But Yaffe also notes Dylan in his autobiography expressing feelings by using unacknowledged lines from Proust, and he derides Dylan’s recent “Modern Times” album as largely plagiarized, though from public domain sources.

It’s a complex subject (all musicians copy each other) as Yaffe affirms. But no matter how many melodies Dylan stole or lines he appropriated, his best songs arrived by grace to express (among other things) a spirit of the times. In his magic years of the 60s even a minor song like “Bob Dylan’s 115th Dream” perfectly represents a certain segment of a generation. (The test of Dylan’s relationship to sources really will be how he enforces his copyrights when someone copies him.)

Yaffe makes much of Dylan’s elusiveness, his Masked and Anonymous “busy being born” changes, but also notes that at 70, Dylan has found a personae and a voice for a part of life few of his generation of stars have managed.

My Dylan was the early one--"Freewheelin'" to "Blood on the Tracks"-- when each new album was a revelation tied in memory to specific places, events and even people.  Yet Yaffe does add information as well as perspective to this period.  I know less about the years following, but though he has more to say about them than the typical treatment, I felt the frustration of his thematic method and sketchy history in the chronology.  In particular he deals with the Traveling Wilburys in only one tantalizing sentence, as exceptionally creative in a murky period.  I thought Dylan was unusually strong in those collaborations and would have liked to know more about why that might be, how it all happened and what lasting relationships or musical insights might have ensued.  (He did have a prior musical relationship with the late George Harrison, and if I'm not mistaken, he has worked since with at least one of the other surviving members: Tom Petty.)

The elegance of this small book is marred by repetitions that are either the product of sloppy editing or have some subtle functions that elude me. Though it’s smarter than most Dylanology, in the end the mysteries it explores tend to dissolve when actually listening to Dylan’s best, or watching the filmed performances in the Martin Scorsese film, No Direction Home, (none of which Scorsese actually shot, Yaffe says). For those of us who don’t know him as anything else, Dylan is his inimitable music and his voice—his “pillar of breath” as Allen Ginsberg said--and they are like a force of nature. The response is wonder.
Posted by Captain Future at 1:53 AM No comments: