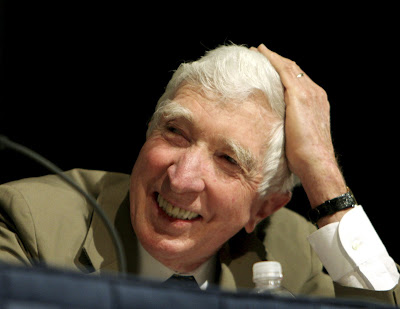 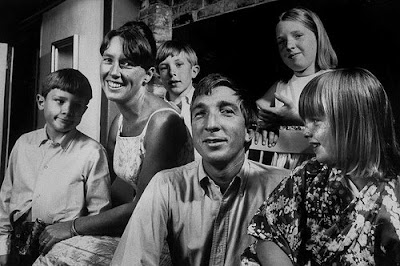 R.I.P. John Updike: a relatively recent photo, and a photo of him with his family in the mid 1960s. My personal memories in the post below.
Posted by Captain Future at 11:21 PM No comments:

Labels: John Updike, R.I.P.
I'll let the heavy hitters of litland appraise the writing career of John Updike. What I'm thinking and feeling tonight, having learned of his death this afternoon, is personal in the way that Updike would understand. I never met him, but his words, his books, have been part of my life for a very long time.

When I was in high school and so taken with a few astonishing writers that I read their paperback books while walking the hot streets of my home town, Updike was one of them. Pigeon Feathers, his second collection of stories, was the first volume of his I read. In those days, I got my paperbacks off the racks at the cigar store or at the supermarket, and a book like this was an amazing treasure. That Updike had been a small town boy from Pennsylvania (but from the eastern part of the state, while I was from the west) held a certain fascination, and his experience was a little ahead of mine and otherwise also different, but was a kind of beacon, as well as sharing important emotional notes. The story I remember the most, that was most important to me then, was "The Happiest I've Been." It added grace notes to my adolescence, and maybe more than that.

As a writer he was an example of style, and I learned a great deal from him then. (I also stored away in my memory for future use some lovemaking techniques from Rabbit, Run.) For a couple of decades more he was a model and a measure. I remember reading the opening pages of The Witches of Eastwick on a beach in his then hometown of Ipswich, Mass., and cursing because he still wrote better.

I remember his books in connection with people. When I think of his stories, and Of the Farm, I remember Judy Dugan, and my first writing teacher, Harold Grutzmacher. The blue paperback copy of Couples and Joni's admiration for the writing and nervousness about its content. Mary, who lived in Ipswich for awhile when Updike still did, and who I was visiting with on that beach. She ran into him once--he was buying an Electrolux. I bought several of his books-- hardcover, autographed-- at the Ipswich bookstore, that I wish I still had.

I read less of his fiction later on, mostly because I couldn't keep up with him. But always his reviews and essays when I came upon them, and I was struck today--and struck is the right word--when I couldn't think of anyone of my generation who could come close to the career he had--the number and quality of books, the breadth of what he wrote about. I doubt we would agree on much politically, but on other matters maybe more. I wrote him a heartfelt letter once at a crucial point in my "career," which he didn't answer. No matter. My admiration for his sentences and for how he talked about literature and his work is boundless.

Somewhere I have the exact quotes, but what I recall now are a couple of statements that remain with me as shared truths. One was to the effect that urban people think about each other, but small town people think about the universe. Another described his perfect reader as a small town boy who discovers his books in the public library--and of course his description is full of just the right sensory details. Which I guess more or less makes me the person he wrote all those books for.

And while I'm on this increasingly familiar subject, as my honored elders disappear from Earth, I only learned today of the death last August of Ted Solotaroff. I met him twice. First when he was the young editor of the New American Review and came to Boston promoting it while I was an even younger editor at the Boston Phoenix. We talked enthusiastically of Gabriel Garcia Marquez, who was remaking our literary universe with A Hundred Years of Solitude. I met him again in the 80s, when he wanted to edit my next book and publish my first book in paperback, only to have both projects promptly scuttled by others at his publishing house. The room always seemed full of possibilities in his presence.

I've still got his early memoir, A Few Good Voices in My Head, which I recall as rueful and a cautionary tale. I'll have to look at it again. It was a piece of a more recent memoir published in a recent issue of The Nation that clued me into his passing. Don't know how I missed that. He was an editorial hero who got crushed by the idiocy of the 80s, and pretty much said so.
Posted by Captain Future at 10:39 PM No comments: 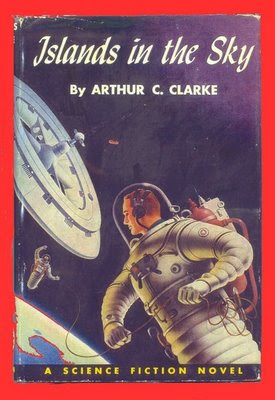 The Arthur C. Clarke juvenile in the Winston science fiction series--a guilty highlight of my reading for pleasure this fall and winter (see post below.) I wonder what librarians did with dust covers like this. We certainly never saw them.
Posted by Captain Future at 2:28 AM No comments: 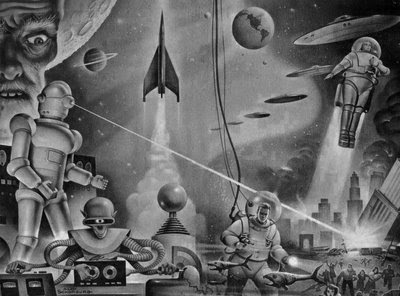 This was the illustration in the front and back inside of the Winston series of science fiction books for adolescents in the 1950s--an illustration I must have studied for hours. Click photo to enlarge.
Posted by Captain Future at 2:27 AM No comments:

The books I read for pleasure this fall and the beginning of winter (i.e. "old books" I read not for review) look a lot like my summer reading. While I am currently reading "nonfiction"-- Northrup Frye's Spiritus Mundi--with great delight, most of what I read was fiction, and most of that was science fiction.

Some of it was by design: I continued to read H.G. Wells and utopian fiction, including the utopian future envisioned by Kim Stanley Robinson in the third of his California trilogy. This is partly for a long-term writing project that has to be qualified as "for pleasure" too, especially in this publishing/economic environment.

In fact I was reading Robinson's Pacific Edge at the same time as Wells' The Dream. (The other Wells utopia I read was Men Like Gods.) I went on to read the rest of the Robinson trilogy, The Wild Shore and The Gold Coast. Written in the late 1980s, they're three different visions of the same mid-21st century period in the same part of California, interrelated in various ways, not the least of which is that the post-apocalyptic future of the first volume is not all that different from the utopian future of the third. The middle volume is a "present trends continue" future: an Orange County of even bigger malls, double-decker freeways and military corporate complex. My admiration for Robinson (looking back, his Sixty Days and Counting was the best and most important book I read in 2008) has only increased.

George Zebrowski is another contemporary sf writer I admire, so I got one of his volumes of short stories, Swift Thoughts, which was largely excellent. But almost the most fun I had was the consequence of reading Lester Del Rey's The World of Science Fiction: The History of a Subculture-- a pleasure in itself that guided me back to some classic sf tales from the 1940s and 50s in an anthology published in 1970 called The Science Fiction Hall of Fame (Vol.1.) I'm not even halfway through it yet but some of these stories are startlingly good. In a way this is most unfortunate, though, because this is one of those books I picked up some time ago--at a used bookstore, thrift shop, recycling center, I don't remember--without knowing anything about it. And when I finally got around to reading it, it turned out to be great and otherwise hard to come by. That's really dangerous--because it only encourages me. I must try to concentrate on the hundreds of books piling up around here that I will never read!

But the absolute most fun I had was a used book I bought on the Internet. I believe I saw the title in a memorial piece on Arthur C. Clarke--it said that one of his first successful novels was what were called "juveniles": science fiction book for adolescents. This turned out to be a very lucrative market for sf writers, including greats like Robert Heinlein, who wrote what's probably the most famous of the juveniles, the classic Space Cadet.

Clarke's novel was part of the series of 35 novels published by the John C. Winston Company between 1952 and 1960--a series famous for its cover and inside cover art as well as the novels. It introduced sf to a new generation, which happened to be mine. They were among the first books I took out of the public library, and I can remember looking a long time at the two page inside cover illustration--the same in every volume--wondering what stories could go with the images.

These novels are now collected and highly prized, though volumes with the dust jacket illustrations are hard to find. I have one (acquired again at a thrift store), though the cover illustration is so worn away as to be not valuable to collectors. The Clarke novel I bought--Islands in the Sky--was a former library book, which is exactly what I wanted. When I got these books out of the Greensburg Public Library on Main Street, they didn't have dust jackets--if there was a cover illustration at all, it was on that hard library book for kids surface. This volume is perfect--complete with its card catalog card and its library card from Sweet Springs, Missouri, tucked in its sleeve. The first kid took it out in January 1953, and it circulated frequently through the 50s, then only once in the 60s, twice in the 70s until the last kid (perhaps a grownup kid) took it out in 1980.

It's a good story, too--lots of technical stuff, a bit of adventure, a teen hero interacting with adult men and women--perfect for the adolescent fascinated by space travel...Now I've got my eye on another one in the series out there, but I don't want to get obsessive about this.
Posted by Captain Future at 1:35 AM No comments: 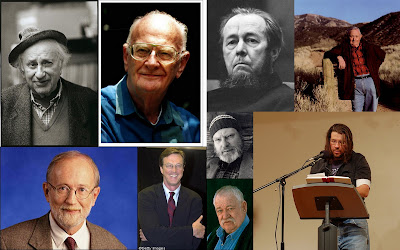