This is a companion volume to Living in a Modern Way: California Design 1930-1965, published by MIT Press in 2011. It profiles some 140 important figures of the period, including designers Charles and Ray Eames.  The profiles are illustrated, including some rare photographs.  It is a smaller format book than its coffee table size predecessor, but both useful (it's cross-referenced) and attractive.
Posted by Captain Future at 4:36 PM No comments: 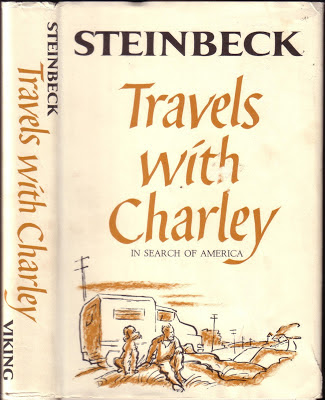 I was reading an advance copy of Philip Caputo's forthcoming book on traveling across America with his dogs, and was reminded of John Steinbeck's Travels with Charley for the first time in years.  It was first published in 1962 when I was in high school, and I read a library copy of it then.  A few years later I bought the paperback, read that and kept among the books that traveled with me for decades.  It might still be around somewhere, misplaced.

Steinbeck was one of the first authors (as opposed to the first poems or stories) of literary reputation I read independently, and probably the very first.  I read some of the volume of his six shorter novels that was on my mother's bookshelves (the same book I now have on mine) and I vividly remember reading his 1961 novel The Winter of Our Discontent in the Readers Digest Condensed Books version.  On the other hand, I didn't consciously think of Travels with Charley at all when I was writing my own book that involved traveling around the country, The Malling of America, though subconsciously it probably had a presence. 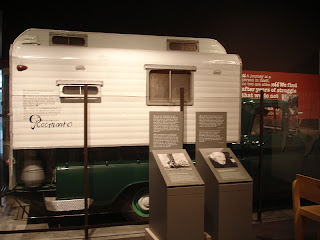 Steinbeck set out with his dog Charley, driving a truck topped by a custom-made "little house built like the cabin of a small boat" for his living quarters.  He named the vehicle Rocinante.  He equipped it with more than it seems it could hold, including guns and fishing gear partly for a cover story.  (I recall being particularly impressed by the typewriter and reams of typing paper.)  Most of the gear turned out to be superfluous, which he admits with the self-deprecating humor that characterizes the book.

It was a journey of ten thousand miles through 34 states over several months, with a few breaks to visit family and meet up with his wife along the way.  He made the now obligatory decision for such books to stay off the interstates. His stated purpose was to become reacquainted with the country he once knew but hadn't seen in decades. He began after Labor Day in 1960, at the age of 58.

He'd been "rather seriously ill" the winter before, he admitted, but even if the trip was taxing beyond his capabilities, he faced that possibility with bravado.  "And in my own life I am not willing to trade quality for quantity.  If this projected journey should prove too much then it was time to go anyway.  I see too many men delay their exits with a sickly, slow reluctance to leave the stage.  It's bad theatre as well as bad living."

His son later put it in starker terms: Steinbeck knew he was dying, and wanted to see the country one last time. The year Travels with Charley was published, Steinbeck somewhat unexpectedly won the Nobel Prize for Literature.  The award caused controversy, with charges that it was not merited--similar to the furor when Sinclair Lewis became the first American writer to win the prize. Steinbeck mentions Lewis in this book, noting his few meetings with him in Lewis' declining years, when he was still scorned in his hometown. Apparently paraphrasing Lewis, he wrote : "The only good writer was a dead writer.  Then he couldn't surprise anyone any more, couldn't hurt anyone anymore."  Steinbeck mentions him as he passes Sauk Center, Minnesota, with its sign, "Birthplace of Sinclair Lewis."  "Brings in some tourists," Steinbeck observes.  "He's a good writer now."

Steinbeck died just six years later, at the age of 66, having published little of consequence and no fiction since this book. More than 50 years later, several of his novels remain integral to the mythology of America.  He brings in some tourists to Salinas, California.  He's a good writer now. 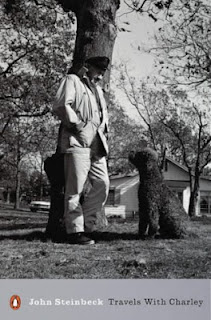 Travels with Charley is a personal account, the tale of a voyage which includes observations of what and who Steinbeck encountered.  The traveler's mood, his penchant for getting lost, spates of bad weather and the illness and treatment of his dog, are just about the only dramatic elements.  But some of his observations do suggest how America has changed, and how it is the same (or at least on the same track) as in 1960.  Steinbeck bemoans the disappearance of local speech, of the local in general, small towns or even the city of Seattle (though he gives more credit than some to corresponding improvements in living standards.)  He is emotionally bothered by "the frantic growth, a carcinomatous growth" of Seattle: "Bulldozers rolled up the green forests and heaped the resulting trash for burning...I wonder why progress looks so much like destruction."  This was not yet the popular theme that it became, for several decades at least if no longer.

On the other hand, while in our time commentators bristle at ostentatious Texas politicians suggesting that the state might secede from the Union, Steinbeck observes in 1960, "Texas is the only state that came into the Union by treaty.  It retains the right to secede at will. We have heard them threaten to secede so often that I formed an enthusiastic organization --The American Friends for Texas Secession.  This stops the subject cold.  They want to be able to secede but they don't want anyone to want them to."

Steinbeck was traveling during the 1960 presidential campaign between John F. Kennedy and Richard Nixon.  This is a pivotal campaign in American history (and very absorbing to me at the time) but Steinbeck (a JFK supporter) found few people who would venture an opinion about it. A certain atomic age foreboding was also present, at least in Steinbeck's mood.

Some of Steinbeck's masculine insistence and style may strike readers today as a little too Hemingwayesque and anachronistic, but his misgivings about the effects of the march of modernity on the country he loved, especially the natural world, still resonate. He notes that cities are already ringed with trash--"In this, if in no other way, we can see the wild and reckless exuberance of our production, and waste seems to be the index."

There is some deft description of what various parts of the country were physically like in 1960.  I find that the innocent wonder of my first reading at 15 or so sets unrealistic expectations for the actual book, but there are some fine sentences, and the sense of the man and his times that was worth revisiting, or let's say, visiting by the person and reader I am now, older than he was then.

Perhaps the most poignant passages for me this time were his descriptions of having a couple of curious wolves in his gunsights, knowing that--according to the standards of the time--he should shoot them because they are considered "vermin"--but losing the impulse to kill them, and choosing to spare them.  To the extent that he left a couple of cans of dog food behind for them.  There is an elegiac quality that emerges now and then, that seems best expressed in this account.  There is a sense of approaching the end, when his strongest desire is to leave as much life behind as he can.  And I expect there's something of the impulse I feel as the years go by: live and let live, gracefully and with mercy.

In the years since the book came out it has apparently inspired similar journeys (apart from the many taken for literary purposes), and this attempt to retrace the journey exactly by Bill Steigerwald, who claims that Steinbeck fudged or fictionalized various aspects of it. Steigerwald is unduly harsh about it, deriving much of his debunking from a timeline which may well have been different and rearranged in composition.  Some rearranging is actually pretty normal.  Spalding Gray used to call himself a "poetic journalist," and most autobiographical writing either purposely, necessarily, unconsciously or artfully changes what happened and in what order.  The travel and the book are related but separate journeys.

Posted by Captain Future at 3:11 AM No comments: