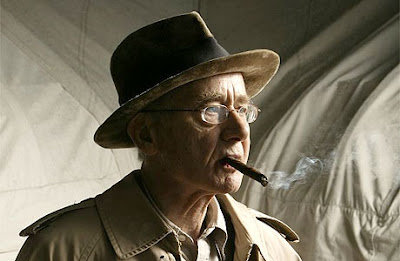 For Pleasure (summer 2010): This summer's big indulgence (stealing hours from reviewables) is Thomas Pynchon's mammoth Against the Day (Penguin.) I'm at page 415, and so not halfway, but I've gone past the Spock joke, and the time travel-related nod to Jack Finney (I'm speculating.) The Chums of Chance are a marvelous invention, and I'm glad to be back with them after maybe too much of the Wild West. Pynchon is so singular and so fertile that there is nothing I have ever been able to do but read him for pleasure.

Of course there's much more to it, and his choice of era--the 1890s and decades immediately after--are both fascinating (especially in America, where modern cities and technology coexist with the last of the Wild West and original America) and perfect for his themes. I've just read the passages in which refugees from the ominous future when capitalism has finally despoiled and used up too much, raid this past for its innocence...

But the summer's discovery was a shorter and more traditional (but still singular) novel by Alan Sillitoe. He seems to be known primarily in the states as the 1950s author of Saturday Night and Sunday Morning, and The Loneliness of the Long Distance Runner, not coincidentally both made into fine movies. But judging from Internet info, he's had a longer presence in the UK and is considered a distinguished novelist. On the basis of the 1976 novel I've just read, he should be. (Those are two photos of him above, one from his fame days, the other more recent.)

The novel is The Widower's Son, about the son of a provincial working class army sergeant in World War I, raised to be a soldier, who becomes not only a soldier in World War II but an artillery officer (and hence a gentleman) in the process. The writing is crisp, with what seemed to me to be a few fleeting literary illusions or suggestions (Joyce, Hemingway) but basically an individual style that matches the character of the men he's writing about. The word I kept thinking of was wisdom. There's wisdom in his descriptions, especially of thoughts and character. That he can describe in a few sentences the confusion of an ascendant member of the working class might be expected. But describing so well and so economically the feelings of falling in love? That's a surprise.

He's taken that inner conflict of the "working class hero" beyond the young men he first wrote about into later confusions: "The fact that he had become a colonel had had more effect on him than he wanted to admit. He'd blown gaps into himself with his own guns. While still in the army it was all right. But now with no bounds to hold him, he didn't know where he belonged anymore." But also in writing about war, the military, father and son, youth and age, love and marriage, Sillitoe shows a sure hand, and as a reader I felt confident in him. The end of the marriage has some of the more daring sections--like the tour de force of a couple quarreling by describing military operations--that I wasn't as sure of as I read them, but I will certainly remember them. I was impressed, and I hope to read more of Sillitoe's fiction.

One other note--I forgot a book I finished this spring: Einstein's Dreams by Alan Lightman. Its short, thematically related stories were perfect for those last minutes of reading before sleep, and so I savored it over time. And since time is its basic subject, and the stories were dreamlike, that seemed to work out fine.
Posted by Captain Future at 3:10 AM No comments: 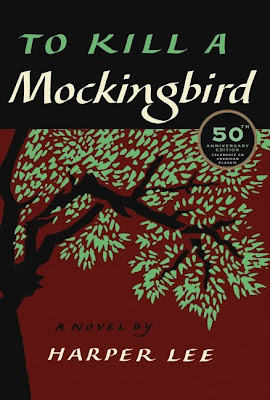 To Kill A Mockingbird
by Harper Lee
HarperCollins

This is the 50th anniversary year for one of the most beloved and enduring American novels. The success of To Kill A Mockingbird was immediate, winning the 1961 Pulitzer Prize for Fiction, and it remains among the top 10 best selling novels of these fifty years. It is also one of the five most assigned novels in American schools, and American librarians voted it the best novel of the twentieth century.

Much of the novel is about the young tomboy Scout (author Harper Lee’s self-portrait) and brother Jem growing up in a small Alabama town in the 1930s. Few writers achieve what she did: portraying childhood events while reflecting the feelings and perceptions gained over time. But the fictionalized memoir becomes a dramatic courtroom drama: Scout’s father Attticus Finch (based on Lee’s father) defends a young black man falsely accused of raping a white woman.

The theme of innocence goes beyond the children to “the mockingbird”—the innocent who only sings and does no one harm—which applies to both the accused Tom Robinson, and to Boo Radley, the neighbor who lives in darkness, the stranger who receives his neighbors’ projections of violence, and is therefore a source of fear.

Another theme, explicitly stated as a lesson to the children, is that of cultivating empathy and understanding by trying to see the world from the other’s perspective, as Scout does finally when she stands on Boo Radley’s porch at the end. To imaginatively live in another’s skin remains a crucial necessity in our public as well as private lives. It’s applicable to many situations but by the early 1960s, it was especially a resonant point of view for whites regarding Civil Rights struggles.

This theme is reinforced in other ways throughout the novel, notably by the story of Mrs. Dubose, an elderly neighbor whose surliness turns out to be the product of physical pain and painkiller addiction. When Jem is punished for vandalizing her garden by being required to read to her every day, it becomes a path for her redemption and peaceful death. It’s another case of assumptions and projections proven wrong, as well as the power of simple acts to do more good than we know.

Harper Lee, now in her 80s and ailing, never published another book. The instant and overwhelming fame she escaped by going back to Alabama may be one reason. But she remained dedicated to the written word. In a 2006 letter to Oprah Winfrey, she wrote: "Now, 75 years later in an abundant society where people have laptops, cell phones, iPods and minds like empty rooms, I still plod along with books.”
Posted by Captain Future at 1:37 AM No comments: