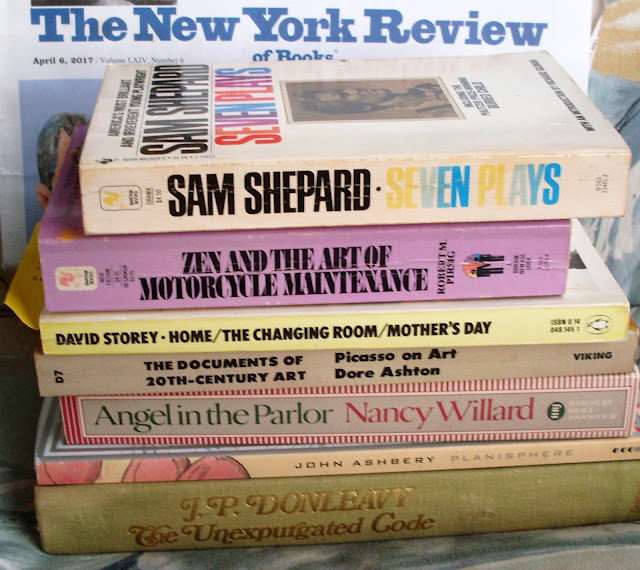 J.P. Donleavy died this year, in September at the age of 91.  His first novel is his best remembered, The Ginger Man.  It was perhaps the last of the books that rose from a scandal to a classic.  I wonder if that will happen again. 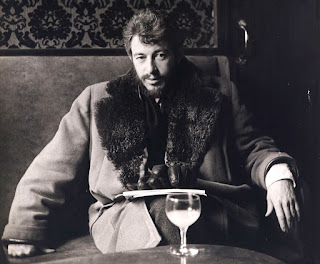 Donleavy was born in the U.S. but moved back to his ancestral Ireland.  The adventures of a classmate at Trinity College in Dubin--no doubt mixed with his own--became the basis for The Ginger Man.  It was first published in 1955, though barely.  It didn't really get wide distribution until the 60s, which is when I first read it.  A charismatic classmate of mine (also an American of Irish extraction) at Knox College was its enthusiast.  He took to scribbling his favorite line as bathroom graffiti: "Bang on, wizard."

I loved its verbal invention and Joycean updates.  I read and owned his 9 novels throughout the 1970s plus his collection of plays, but the only volume that seems to have survived in my current collection is his still hilarious The Unexpurgated Code: A Complete Manual of Survival & Manners. 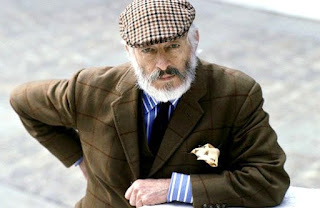 Since then he not only wrote more novels and other books but saw his work transferred to the stage and a song or two written.  In the 1970s I was working with a fledgling film director who contacted him for movie rights to one of his novels.  Donleavy did his own agent work so David talked to him, but he wasn't interested in having his fiction filmed, and I believe he stuck to that position for the rest of his life.  If he'd given us the rights in this case though, I would have had first crack at the screenplay.

He also lived to reap awards, including the Irish version of a lifetime achievement award in 2015.  He accepted by reading an excerpt from his The Unexpurgated Code on the proper way to accept an award, which included how to hint that perhaps it could have be awarded earlier.  It's both a funny and a surreal wish-fulfillment moment, as seen on this video, which also includes biographical information and a few excellent tributes.

Robert Pirsig also died in 2017 at the age of 81.  He developed his personal philosophy in two books, the first of which became very popular in the mid-1970s: Zen and the Art of Motorcycle Maintenance.  In that book (if I recall correctly) he wrote that there are basically two kinds of people: the person who notices a dripping faucet and thinks it should be fixed but let's it drip, and the person who immediately fixes it.  There was no question which one I was, but I enjoyed the book anyway.

The style grabbed me and I learned from his point of view, even if motorcycle maintenance would never interest me.  (I'm also reminded that the paperback came in different colors--the first time that gimmick was used, to my recollection.) (Update: Maybe the second.  I think Future Shock was probably the first, a few years earlier.) 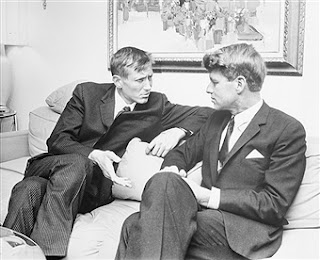 In 1968, Russian poet Yevgeny Yevthushenko--already the most famous Russian poet in the West--was a guest at the home of Senator Robert F. Kennedy, then running for President.  The two quoted poetry at each other and attempted to toast in the Russian manner by drinking off a glass of champagne and throwing the glasses to break in the fireplace.  But the glasses didn't break--they were plastic.  Both took this as a bad omen.  Within months, Robert Kennedy was dead.  Yevthushenko lived another 49 years, until he died in 2017.

May they all rest in peace.  Their work lives on.
Posted by Captain Future at 10:20 PM No comments:

Beyond the Self: Buddhism and Neuroscience 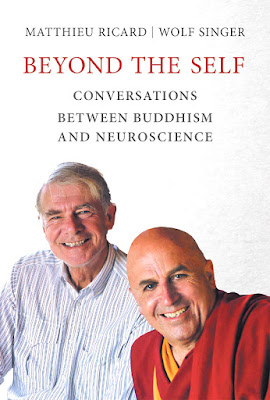 BEYOND THE SELF: Conversations Between Buddhism and Neuroscience
by Matthieu Ricard and Wolf Singer
MIT Press

I remember seeing a public television documentary on the brain, in the early 1970s.  It was then orthodoxy that humans could not consciously affect internal workings of the body.  But the final shot was of a Buddhist monk in meditation, as the voiceover mentioned that meditators claimed to affect their own pulse rate and other functions, and this ought to be investigated.

Shortly after that, biofeedback and "the relaxation response" became New Age enthusiasms that by now have entered orthodox medicine.  The relationship of the brain and body continues to be explored, and for three decades now, the relationship of brain and mind has been explored through the agency of the Mind and Life Institute and the efforts of the Dalai Lama.  A series of gatherings of scientists and monks sparked laboratory research in which experienced meditators like Matthieu Ricard (a participant at several of the Dalai Lama's gatherings) wore sensors that recorded brain patterns, studied by neuroscientists (like Wolf Singer.)

These meetings resulted in a series of books (10 of which I've read and reviewed), with many of the more recent discussions viewable on the Internet.  This work profoundly affected some of the scientists involved, notably psychologist Paul Ekman, who wrote a book with the Dalai Lama.  But neuroscientists have also been fascinated by what they found, which clearly includes Wolf Singer.

The basis for dialogue between Tibetan Buddhists and brain scientists has been that both investigate the workings of the mind.  Tibetan Buddhist meditators have complied centuries of data and conclusions, based on what the meditators experienced.  This is the first person perspective, but with such elaborate data and systems that these scientists, wedded to the objectivity of only the third person perspective, could not ignore.  They also could not ignore how different the brains of very experienced meditators worked.

It's all come a long way and this book is one of the results.  It also turns out to be the  best book I've read on neuroscience, period, and the clearest explanation of Tibetan Buddhism and its approach to meditation.  More specifically, this is the clearest discussion I've read so far on the relationship of Buddhist meditation and the brain.  (I've tried to read James Austin but I failed.)

Ricard, who is a trained scientist as well as a Tibetan Buddhist monk, has done a few of these dialogue books and he's very good at it.  He and Wolf engaged substantively and for the most part succinctly, which must be partly a product of the editing, as this book reflects dialogues over eight years.

One impression I got is that at least the particular kind of Buddhism that comes from Tibet and neuroscience are very similar in their view of the brain.  Tibetan Buddhism as I observe from the Dalai Lama and others, and now Ricard, is highly logical.  It comports well with the mechanistic approach of neuroscience, though Wolf is pretty clear on where the mechanistic model runs up against limits.

There are six broad topics that expand to inevitable problems of epistemology and perhaps even (in "why is there something instead of nothing?") cosmology. That they agree on so much may surprise some readers.  The expected disagreement on on the ultimate nature of consciousness is minimized, and Ricard leaves it as an area for further research.

The logical rigor of Tibetan Buddhism may also be surprising.  I remember when as a Catholic boy I first read anything about Buddhist tenets (usually in popular literature), the romantic and mystical elements jumped out, like "enlightenment" and Zen koans.  The koan that seemed to capture everyone's imagination was: "what is the sound of one hand clapping?"  It promised such depths of paradox and maybe even, the Answer.

But Ricard uses it in a different context, to explain how a heated argument needs two participants.  "So, as the Tibetan saying goes, 'One cannot clap with one hand."  So it seems that for Tibetan Buddhists the answer to "what is the sound of one hand clapping?" is exactly what common sense tells you: silence.

Within the broad topics and technical discussions, I found at least one answer I've been seeking.  As Ricard says, the concentration of meditation is not rumination--in fact, ruminating is a distraction to be avoided.  I always wondered how a creative person reconciles meditational rigor with the creative fruits of rumination, daydreaming, imagination.

The answer is akin to the sound of one hand clapping--because the relationship is the contradiction it seems to be. Wolf surmises that unstable states (the wandering mind) could be a prerequisite for creativity.  Ricard agrees, citing a neuroscience study: "brain states favorable to creativity seem to be mutually exclusive with focused attention."

Which of course is not to say that writers and other creative people shouldn't meditate, for it certainly helps in many other ways which eventually contribute to the creative life.

For myself, even though Tibetan Buddhism presents the closest thing to a practical and congenial belief and value system, there are limits to its application. (Plus as much as the Dalai Lama laughs, I find Zen funnier, in that paradoxical way.) And there are many more limits to neuroscience, in my view.  It's interesting that to some this book is a revelation that Buddhism actually has something to say about the brain.  That's been clear to me for decades, but if its clarity finally gets through, then it has done its job, with elegant rigor.
Posted by Captain Future at 10:47 PM No comments: