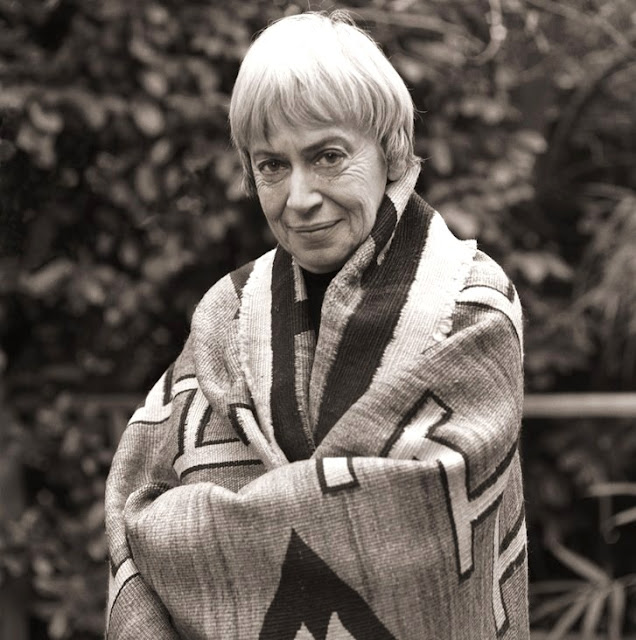 “ One voice speaking truth is a greater force than fleets and armies, given time, plenty of time...” Ursula Le Guin 1969 The Left Hand of Darkness

"Whatever may happen in the bad times, the verbal arts, at least, tend to become very important. It’s really important what you say in the bad times.” Ursula Le Guin 2017 Conversations on Writing with David Naimon

The first month of 2018 was not yet over before Ursula Le Guin died.  No Time To Spare, her wonderful selection of online writing, especially for her blog, had been a Christmas hit in December.  I bought it Christmas Eve at Kepler's Bookstore in Menlo Park, California.

This Christmastime I returned to Kepler's and saw a special LeGuin endcap, with that book still featured, as well as collections of short stories, her last volume of poetry, and the collected Earthsea novels, plus a new book, Conversations on Writing, which consists of interviews she gave in 2017.  This book suggests some of the reasons that Le Guin was and will remain a strong influence on other writers, and all kinds of writing.

In terms of her fictions, her particular gift of anthropological science fiction is likely to influence even more visions of the future, as that future is more and more shaped by climate and ecological crisis.  Margaret Atwood notes that all the oppressive aspects of the future she imagines in her novel, The Handmaid's Tale, do happen in parts of the world or did happen in history.  Many of the striking imaginings in Le Guin's novels are derived from Indigenous cultures of the past and present.  Her insistence on cultural attributes that serve the Earth as well as humanity, and preserve a realistic relationship between them, will only grow in importance. 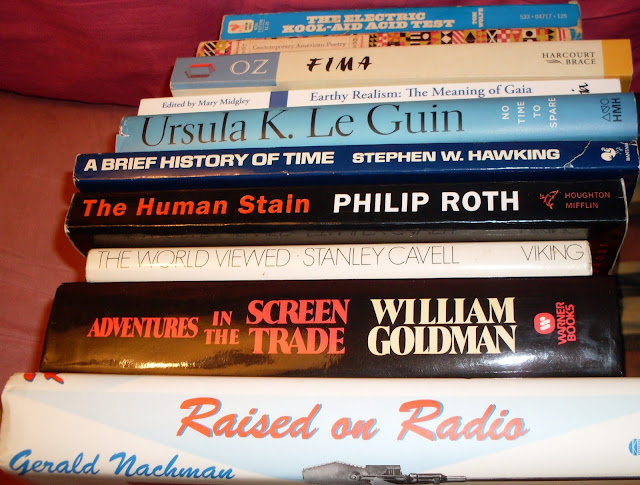 Three very different writers who died in 2018, Philip Roth, Neil Simon and Tom Wolfe, did much to illuminate American life in the 20th century, and in so doing, helped define our view of our own culture.

Roth in his meticulous fictions, in both his grim and hilarious modes, and Simon in his comic plays and screenplays, explored Jewish-American experience, and revealed much about both sides of the hyphen.  They also transcended nationality, imagining their way into other sorts of lives.  Because Neil Simon was so popular, his achievement is perhaps undervalued, particularly his screenplays, including a lesser known gem like Max Dugan Returns. Tom Wolfe on the other hand came from the WASP world, and was equally comfortable writing about the rich and famous, and the oddball outcasts.  He attempted more consciously to define the culture he observed.

Other prominent authors died in 2018, including physicist Stephen Hawking and screenwriter William Goldman, and most recently, Israeli novelist Amos Oz.  But I also recall connections to work by some lesser-known figures: the British philosopher Mary Midgely, who did such crystalline work on evolution, and American philosopher Stanley Cavell, whose books on film I read in the early 70s.

I have a weakness for books on arts and entertainment history, and Gerald Nachman's Raised On Radio was a fairly recent and serendipitous delight.  That's the thing about books--they are the most accessible legacy in the arts, small physical objects that circulate and are otherwise more easily available than films or TV shows, let alone the evanescence of performances. 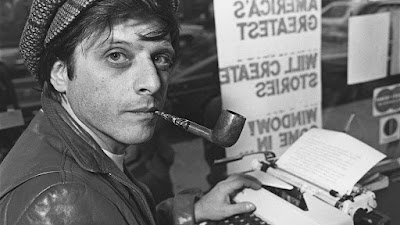 Donald Hall and Tom Clark are probably the best known poets in the US who died in 2018, at least among those who regularly read poetry, other poets being prominent among them. Though poets arguably still have a high profile in some parts of the world, many would seem to work in relative obscurity.  But they write on anyway, and even if their readers are few, they still can touch individual lives at particular moments, in the unpredictable serendipity of the written word.

What follows is not an exhaustive list of poets who died in 2018.  But it is a long one, and testifies to the endurance of this form in every part of the world. Even if many are not mentioned elsewhere, they are due the honor of being named this once:

May they all rest in peace.  Their work lives on.

Posted by Captain Future at 11:13 PM No comments: 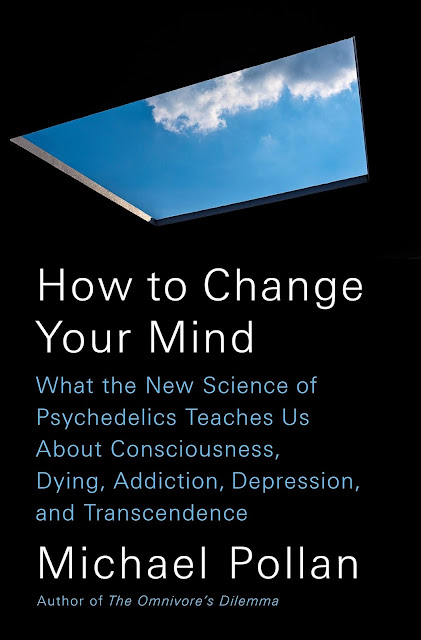 How To Change Your Mind: What the New Science of Psychedelics Teaches Us About Consciousness, Dying, Addiction, Depression and Transcendence

Best known as the author of the best-selling Omnivore's Dilemma and other food-related books in a food-conscious culture (at least among those with the income to buy books on the subject), Michael Pollan caught another wave with this comprehensive volume on a subject whose time has come back.  With the widespread legalization of cannabis, it was a good bet--but a risk nevertheless--that the total reign of silence on psychedelics was due to be broken.

Pollan did that with a revealing and objective account of the history of psychedelics in the 20th century and the revival of research and other uses in the present.  In between he narrates some of his own recent experiences with organic and chemically created psychedelics.   He makes deft use of figures like fungi scientist Paul Stamets who span the first wave of interest in the 60s and today's revival.  The result is a 450 page book that the New York Times has named one of the ten best published in 2018.

By the time Pollan was a college student in the late 1970s, the psychedelic period was largely over.   At the start Pollan seems perhaps too preemptively embarrassed  by that era's subsequent reputation, seemingly fearful of scaring readers away.  But he is judicious and forthright in the historical narrative: how the explosion of LSD, magic mushrooms and mescaline out of the research laboratory and into youth culture, as well as the messianic excesses of Timothy Leary and others,  led to a total ban of psychedelics, including scientific research, that's lasted for decades.  Where would soldiers from Vietnam come from, or willing cogs in the profit-making machine?  It couldn't be allowed.  This despite the unsurprising fact that most of the scare stories about LSD were untrue (nobody went blind staring into the sun on an acid trip) and that the research was promising, especially in treating addiction and mental illnesses. 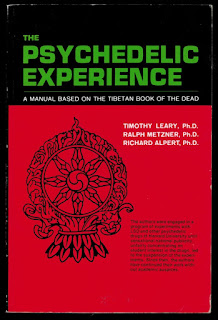 However when I was in my senior year of college in 1967-68, that period was in full bloom, though on my perhaps backward Midwestern campus we were still mostly catching up with cannabis culture.  Nevertheless, we were listening to psychedelic music, seeing psychedelic art, wearing psychedelic clothes, and noting the mind-expansion enthusiasm of the Beatles and so many others.  In my off-campus house I carefully read The Psychedelic Experience by Leary, Ralph Metzner and Richard Albert (later, Ram Das)--all clearly labeled as Ph.D'--with its tribute to Jung and its programmatic LSD trip advice, particularly in selecting the right "set and setting" for the experience.  It was serious, if not sober, stuff.

The first opportunity I had to actually do LSD didn't come until the following winter of '68, and though I considered the decision carefully, in the end I unaccountably jumped in without any regard to set and setting or a programmed trip.  I was one of a group of younger and paradoxically more experienced students, who simply dropped acid and went about a normal Saturday night, that included going together to a movie.  I don't recall what movie it was, but it definitely contained violence that upset me, especially given the Vietnam and assassinations times. Going to this film seemed a terrible decision, and I realized I couldn't really trust the people I was with. So I deliberately brought myself down. That I was able to do so with relative ease made me suspect the substance I'd taken wasn't LSD, either wholly or at all.

I had three more subsequent experiences with substances I was told were LSD or mescaline, and they were largely the same.  I had a few experiential insights in a Colorado wilds on the supposed mescaline, and a fine time tripping to Abbey Road in Berkeley while trying to ignore the intense head trip discussion in the next room,  but in general the same two factors pertained: I doubted the substance was pure LSD or mescaline, and I couldn't trust my environment (or in one case I had to cope with somebody else's crisis.)  In terms of a psychedelic experience, I went farther in my senior year with too much Humboldt cannabis of a strength I wasn't used to, or it too could have been adulterated.  (Ironically perhaps, I've lived more than 20 years in Humboldt County now without so much as a toke.)

So it is especially interesting to me that today's trips tend to be controlled, with experienced "guides" in safe--if sometimes seemingly soporific--environments.  (Compare Pollan's descriptions of his trips with Sting's account of taking ayahuasca in Brazil in his autobiography Broken Music.) Purity of product can still be a question, although as with today's cannabis, there's more sophisticated control possible. 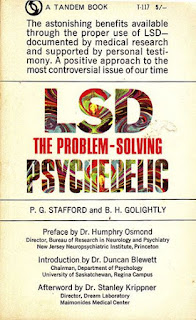 Pollan reviews the substantive research into what can generally be called the medical potentials of psychedelics in the 1950s and 60s.  Though such research was described in such readily available books as the 1967 paperback LSD: The Problem-Solving Psychedelic, the cultural myth of that time tended to emphasize CIA-backed mind control research and the clueless psychologists that questioned volunteer Ken Kesey, tripping his brains out at Stanford (as referenced in LSD's first and only literary classic of the period, Tom Wolfe's The Electric Kool-Aid Acid Test.)

Pollan draws a government-broken line between that research and the now ongoing and growing research into the psychedelic potential for a range of psychological and even physical conditions. (Aging baby boomers may be particularly interested in the results being obtained with terminal patients who lose their fear of death.)

He reveals lesser known influences that outlived the 60s to extend their effects to today, such as the role these substances paid in the creative breakthroughs by Steve Jobs and others that led in part to the computer and tech explosion, and the inspiration they provided the legendary Bill K. to start his Alcoholics Anonymous program, the basis for many such programs since.

Pollan can't avoid the philosophical and (broadly speaking) spiritual effects of these experiences, though at times it seems he'd like to.  But eventually he comes clean, suggesting that even as psychedelics are useful in a wide range of medical conditions--even perhaps a miracle cure for some, or at least a radical redefinition of them--their utility transcends and perhaps redefines science.  That power to rearrange how the world is understood, more than anything, permeated the psychedelic 60s and early 70s, so that they changed the culture, which in turn suggested these insights and their effects to many of us whether or not we dropped that pure acid in the proper set and setting.

Pollan is annoyingly, though understandably defensive at the beginning of the book, but it took some courage and discernment to tell this story as fairly and fully as he does. The evidence he provides more than suggests that psychedelics can be of great and perhaps transformative benefit, in medical settings and beyond.

Because the fearful establishment of the 60s was right in one respect: psychedelics can foster big changes: in perception, attitude, consciousness, and relationships to the self, others, the world and all of reality. They can help change minds, and thereby, eventually, change the world.  Had they not been so thoroughly suppressed but allowed to mature, how different the past fifty years might have been.
Posted by Captain Future at 1:48 AM No comments: