Bring Me the Head of Philip K. Dick 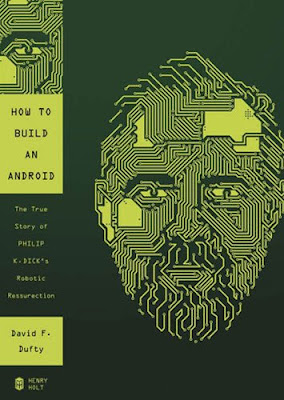 How to Build An Android: The True Story of Philip K. Dick’s Robotic Resurrection
by David F. Dufty
Henry Holt

Blade Runner, a film that flopped when it was released in 1982, has since become legendary. It was made from a novel by Philip K. Dick (as were at least nine other movies, including Spielberg’s Minority Report and Arnold’s Total Recall.)  A highly productive California-based science fiction writer from the 1950s until his death in 1982, he inspired generations of other writers, notably fellow West Coasters William Gibson, Ursula Le Guin and Kim Stanley Robinson.  He still casts quite a shadow.  A hefty volume of his theories and observations (Exegesis) has recently been published, and the New York Times just ran a long 3-part series on Dick as a "sci-fi philosopher."

As in Blade Runner, many of Dick’s stories involved androids and “replicants,” and the resulting confusions of identification and identity. This as well as other themes he explored made him a particular favorite among the sci-fi minded in computer, robotics and artificial intelligence fields. One of those was David Hanson, who was startling people with his android-ready heads with lifelike skin that internal motors could shape into realistic facial expressions. Another was Andrew Olney, who was programming robots capable of having realistic conversations as learning aids.

When they met in 2004, the idea to create a Philip K. Dick android was born. In a year, it was a reality. But even though a university lab and the FedEx Institute of Technology in Memphis became involved (the head of which one Halloween conducted his meetings in a Star Trek officer’s uniform)   this complex project was mostly accomplished with very little money by Hanson and Olney, motivated by the technical challenges, the possibilities they imagined, and the kick of recreating Philip K. Dick.

Author David F. Dufty, himself a postdoctoral fellow at the University of Memphis lab when this was going on, tells a good story about the ups and downs, ins and outs of the project, which involves a fair amount of goofy mishaps, mostly due to the unforeseen (but easily foreseeable) quirks of mundane reality that androids (and their makers) have yet to master. That part of the story results in a conclusion which makes this almost mythic.

For Philip K. Dick was also famous for writing about conspiracies, and for believing they existed in the real world. (Then again, Watergate revelations in the 70s revealed that the government really had been spying on people like him.) So the threads of the story come together in one stranger than fiction event: on a flight to San Francisco for a demonstration at Google headquarters, his android head was left behind in an overhead bin.  Though an airline employee reported it found and on its way to its owner, it never arrived.  The android head of Philip K. Dick was never seen again.

The geek-oriented or simply tech-curious will enjoy the descriptions of the innovative work that went into the project. With minimal jargon, Dufty makes the tech as well as the personalities part of the story flow, an admirable example for a growing genre covering a dominating industry: adventures in Tech World. He ably integrates Philip K. Dick’s biography and major works into the story, which makes it unique. The story itself reveals the classic relationship of sci-fi and new tech, as well as suggesting how surprisingly far towards the androids of fiction current technology is taking us. In focusing on Hanson (basically a sculptor and a hardware tinkerer) and Olney (a software guy) he chronicles another relationship of art and science.

The book itself could have used more and better photos and illustrations, but otherwise it’s a fascinating account that transcends its specific subject.
Posted by Captain Future at 11:18 PM No comments: 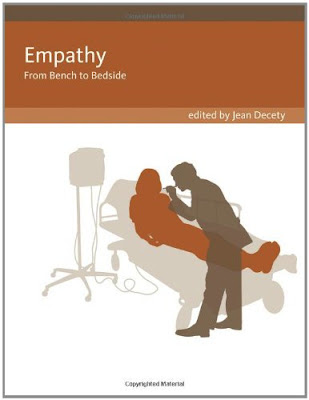 Years of a rigid interpretation of Darwinian evolution tended to suppress study of qualities like altruism, compassion, cooperative behavior and empathy, since they didn’t fit into the model of an every-organism-for-itself struggle for survival and transmission of genes. Empathy was even an aberration, a human concoction of religion and—often enough by implication--silly women. But the evidence for the existence of these qualities were too obvious to ignore forever, and more nuanced interpretations of natural selection helped bring them into respectable scientific study. So much time has been lost however that this research is still just beginning.

The collection of scholarly essays in Empathy: From Bench to Bedside is such a wide-ranging beginning. Though even the term is still ambiguous, editor Jean Decety ventures a working definition: “...the natural capacity to share, understand, and respond with care to the state of others...” Even the word “natural” is a great leap forward. The topics range from the relationship of empathy to evolution and human nature (Allan Young) and its possible evolutionary role (Sharee Light and Carolyn Zahn-Waxler) to empathy and neuroscience (Abigail Marsh, Jamil Zaki & Kevin Ochsner, Daniel Terman), its role in childhood development (Amrisha Vaish & Felix Warneken; Nancy Eisenberg. Snjezana Huerta, Alison Edwards), to its role in social psychology (Stephanie Echols & Joshua Corell, etc.) and medical care (Johanna Shapiro, Charles Figley, Ezequiel Gleichgerrcht & Jean Decety.)

Beginning with C. Daniel Batson on his “empathy-altruism hypothesis,” some articles outline further tests and issues for future research. This volume demonstrates the current complexity in the field, which seems partly intrinsic to empathy itself, but also to an uncertain range of definitions. But the true significance here may simply be that all this research exists and is expressed and documented in one volume.

Evidence of just how “natural” empathy might be is found in the chapter on primates and other mammals by Frans B. M. de Waal, a pioneer of empathy studies in general. His work on primates has been instrumental in bringing these qualities into scientific discussion. Why hadn’t other researchers found such evidence in primates before? Because, de Waal has suggested elsewhere, they weren’t looking for it. Instead their assumptions about evolution and about animals prevented them from seeing it. 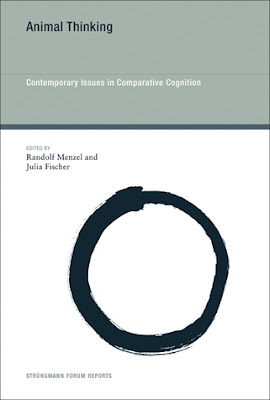 Animal Thinking is another topic that would have been laughed out of science not so long ago. As editors Randolf Menzel and Julia Fischer write in their introduction, studies have gone beyond the question of whether animals think at all, or whether they have any effective memory to more nuanced issues, like how animals might plan and decide for the future.

The first section attacks a topic for which there is much evidence: animal navigation, from honeybees (Menzel) to birds (Verner P. Bingham.) Animal communication is another topic, even more fraught with problems of definition. While all possible manifestations of animal thinking bear upon the human, and in particular the issues raised concerning empathy and cooperation, the final section of this book, on “social knowledge,” confronts these issues directly, inevitably involving group as well as individual behavior.

These studies raise questions about scientific disciplines and future research. J.R. Stevens calls for a synthesis of evolutionary and psychological approaches to decision-making issues, but that seems good advice in general. He notes the emergence of cognitive ecology and evolutionary psychology as pertinent fields. While Derek Penn suggests that folk psychology “ruined comparative psychology,” scientific research would do well to pay attention to the knowledge of indigenous peoples accrued over centuries of intimate relationships and interdependent culture-creation with animals.

These essays are the product of the Ernest Strungmann Forum, and each topic section includes a synthesis or summary authored by a number of scholars. Both volumes are sturdy, no-nonsense, durable books with clear type. They should stand up to frequent reference and repeated readings, as well they should.
Posted by Captain Future at 11:25 PM No comments: