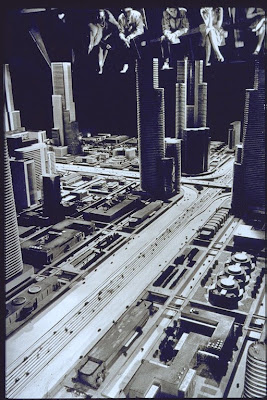 Visitors to the 1939 New York World's Fair look down at the car-intensive vision in the Futurama exhibit. The fix we're in because such a vision was realized, and how we can make it to our future is the topic of the two books noted below.
Posted by Captain Future at 3:47 PM No comments:

To be properly shocked by the idea of two billion cars in the world in 20 years, you need to know that at present there are one billion. How can the planet sustain such growth at a time when cutting back on fossil fuel pollution--and possibly on energy use in general--is crucial?

Perhaps surprisingly, the authors don't emphasize slowing the growth in the number of cars, but in their vision of "Futurama III" (following the car-intensive visions promoted in the General Motors Futurama displays at the New York World's Fairs of 1939 and 1964) for the transportation world of 2050, people will use different kinds of cars in different ways, as well as a mix of transportation vehicles, not necessarily privately owned but thanks in part to computer power, always available. "A typical traveler might use one form of tranportation or mobility service one day and another the next, depending on the nature of the errand, time available, distance, weather and traffic conditions, and personal considerations." And of course they will all be zero emission vehicles.

This vision follows a succinct, crisply written but still thorough summary of recent transportation and fossil fuel history, which makes this a valuable handbook on these issues. As for policy, the authors have definite and clearly stated views on what will work and what won't in energy and climate crisis efforts, which add informed opinion to ongoing debates. All together, Two Billion Cars is an exceptionally clear and useful book.

Fuel is a mini-anthology of writings plus photos and illustrations. It also emphasizes mixed modes of transportation and "energy pluralism," while being perhaps even more aggressive in stating the need to change quickly from dependence on oil, and the practical difficulties of doing so.

The essays are a combination of pretty specific case studies and more general summaries, which is a good mix. As a physical book, however, this volume confuses me. It's heavily illustrated with photos, drawings, charts, maps, etc. but they don't seem particularly striking or useful to me (but then, I'm not a chart and graph person, let alone a fan of schematics) and the book is an odd size for an illustration-heavy tome--small and fat--and the binding works against being able to easily see the illustrations, or even keep the book open.

This might just be a question of style, and it doesn't grab me but it might be just the thing for others. The essays, though uneven, are mostly pertinent and sometimes provocative.
Posted by Captain Future at 3:16 PM No comments: 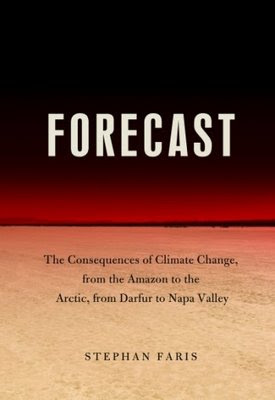 If you read just one book on the Climate Crisis this year, FORECAST by Stephan Faris should be it--partly because it's compelling reading. See review below.
Posted by Captain Future at 6:36 PM No comments:

Labels: climate crisis
FORECAST: The Consequences of Climate Change, from the Amazon to the Arctic, from Darfur to Napa Valley
By Stephan Faris
Henry Holt

There are plenty of books on the climate crisis, but a readable one is rare enough to fetch a Nobel Peace Prize. Though solutions depend on specific and possibly boring knowledge and actions, political and public support requires general understanding and passionate attention. This book is written not by a committee nor as the result of group findings, but by an individual writer—not a scientist or a politician but an astute and acute journalist. It is that rarity: excellently reported and written, very readable and therefore an important book on the most significant topic of our time.

It’s also a post-Inconvenient Truth treatment that doesn’t analyze or speculate but describes. This isn’t about the far future, but changes already underway that are bound to increase in the next few decades: “impacts that range from the subtle and sometimes benign to the horrific and potentially catastrophic…Yet we don’t have to guess at the consequences of a warming world…The future of our planet can be found now, on the frontiers of climate change.”

Faris reports from on the ground to chronicle drought and the ensuing violence in Darfur, hurricanes and the ensuing chaos on the Gulf Coast, the warming Arctic, refugees in Italy from environmental disasters in Africa (which displace more people than war). He writes about lesser- known effects, like the migration of tropical diseases northward, now including North America. Their relationship to the climate crisis is general: as one scientist says, we can’t say Katrina was caused by it, but we can say that the climate crisis will cause more Katrinas.

That the climate is changing is simply part of the experience of the people he interviews, and the reality hits in small, telling comments, like the first mate of a science vessel in Key West who acknowledges that the coral is dying fast, but adds, “it’s the best you’re ever going to see in your lifetime. So try to enjoy that.” Or the Napa winegrower who observes, “This is a beautiful place. I just hope we can even grow flowers here in twenty years.”

Better wines is just about the only positive effect of warming that Farris found, and though the projection that “lands suitable for producing premium wines could shrink by 81%” in California may bring short-term benefits to North Coast and Pacific Northwest wines, one grower observes that the medium and long-term prospects aren’t so good.

Faris can even breathe live into familiar generalizations with his prose: rising ocean temperatures “mean fiercer winds and crueler rains,” bringing “the beginnings of unprecedented meteorological violence.” His final chapter of conclusions is direct and devastating. Every breath we take contains more C02 than any human before us. If we simply allow things to get slowly worse, Faris warns, we will be overwhelmed.

So let me utter the cliche because I mean it: if you read but one book on the climate crisis this year, this book should be that one. It brings the problems alive and that's vital, because these are problems that threaten life for generations to come.
Posted by Captain Future at 6:27 PM No comments: