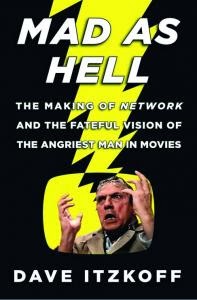 Mad As Hell: The Making of Network and the Fateful Vision of the Angriest Man in Movies
By Dave Itzkoff
Times Books

The 1976 movie Network has become iconic, especially with media folk.  Aaron Sorkin mentioned it at the beginning of his Oscar acceptance speech (for The Social Network) and Keith Olbermann cited it more than once on his Countdown program.  (Both are interviewed for this book's final section, and both contributed blurbs.)  I had to disentangle my memory of it from Broadcast News (1987), neither of which I've watched in awhile.  But its most memorable moment remains its most fateful: Peter Finch as the half-mad anchorman urging the audience to shout "I'm mad as hell and I'm not going to take this anymore!"

New York Times reporter Dave Itzkoff's book follows the conception and making of the film, the immediate aftermath and (in that last chapter) how its prophesies match up with the current media landscape.  The narrative concentrates on screenwriter Paddy Chayefsky, beginning with his early career in early TV drama (including the 1950s classic Marty, which he got his first Ocar for expanding into a feature film.)  Itzkoff follows the deal-making, the progress of the Network screenplay through clarifying drafts, followed by the choice of director (Sidney Lumet) and the casting (Faye Dunaway, William Holden, Finch, Robert Duvall, Ned Beatty, Beatrice Straight and newcomers Kathy Cronkite--Walter's daughter--and Arthur Burghardt.)

As a writer I thought I'd be fascinated by the screenplay's progress, but the narrative came alive for me when the director and the actors entered.  The story of the filming had its moments (Finch could only manage one take of that famous speech), but the lore begins with the movie's reception and the varying place in each of these careers that it turned out to hold.

The movie revived Peter Finch's career, but he died of a heart attack before he won that year's Oscar for Best Actor.  Dunaway won Best Actress, but it turned out to be the peak of her career, with a few notable roles afterwards and years of obscure films (which given the pressures Itzkoff mentions, might be a happier fate.)  The strangest Oscar went to Beatrice Straight for supporting actress--her scenes were so short she was almost cut from the picture, yet she won over some considerable performances.

The newest performers had careers afterwards, though mostly in TV (Kathy Cronkite) and in voice work (Burghardt.)  The actors with major successes in the future were the not-so-young Ned Beatty (Superman)  and Robert Duvall (already famous for the Godfather films, he had memorable roles ahead in Apocalypse Now, Tender Mercies, The Natural, Lonesome Dove, etc.)

It was one of the last great films for the veteran Sidney Lumet, though The Verdict was still ahead.  And it was the pinnacle for Chayefsky, who won the Oscar for best screenplay, but after one more big budget adventure ended unhappily (Altered States) he succumbed to a heart attack in 1983.

Chayefsky was able to get Network made mostly because of the success of his first foray into the satirical flaying of a contemporary institution in Hospital (1971) starring George C. Scott, which remains a memorable movie as the Doctor Strangelove of institutional medicine in America.  Network took on the new influence of entertainment values on network news.

Itzkoff  goes into fascinating detail about the immediate reaction to the movie and its critique of TV news and television itself.  Chayefsky said different things about his intentions, but when he said the movie was about what TV could be--so ratings driven that suicides and assassinations would occur to attract viewers--rather than what it then was.

Itzkoff surveys the current scene mostly through some interviews with today's media stars, some scattered summaries and a few pungent observations of his own.  But I would have liked a few pages devoted to a clearer sequence of how television got this way, beginning with what Chayefsky must have noticed in the 1970s.  For even when there were three networks, the future was in independent stations and the first syndicated tabloid news shows in the early 70s.

As for Network itself, I suspect that the contrary reviews Itzkoff summarizes all have a grain of truth.  Yes, it was bold, fitfully eloquent, passionate and often on point.  And yes (as Frank Rich suggested) it did show that in some ways Chayefsky was raging at the young and ideas he didn't understand.

I haven't actually seen the movie lately, as I suppose is the case with most readers who haven't been watching it religiously for years.  Which made me wonder, why not slip a DVD of it in the back of the book?  I assume there are studio difficulties, but it would probably increase book sales.  There are a few pages of fairly undistinguished photos (though the one that is supposed to have gotten Dunaway in such trouble is useful.)

Itzkoff applies journalism well to archival material and interviews concerning this movie, and I experienced his narrative as adequate but not as exciting or illuminating as those bubbly blurbers apparently did.  Those who admire Chayefsky get an interesting portrait of the man, flaws and all.  While he used his rage to brilliant comic and analytical effect, in the end the rage may have become  too defining, perhaps for him but also for this movie.

Now our world features a digitized multimedia high-volume blizzard of rages, a politics of voices whose identities and social networks depend on nonstop shouting that they are mad as hell.  But because they don't have much more than rage, they still wind up having to take it evermore.
Posted by Captain Future at 1:46 AM No comments: