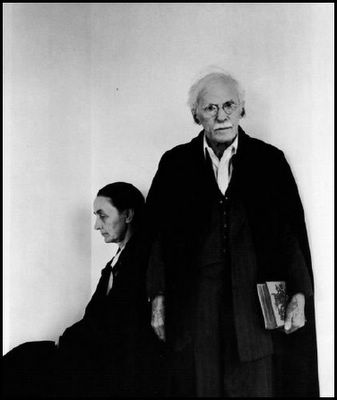 Alfred and Georgia without their dog at the end of the war.

Posted by Captain Future at 2:43 AM No comments:


We’re not exactly bereft of books about this very important---and for us now, perhaps very romantic period---in the arts, the early 20th century in Europe and America. But after so many tomes (as well as exhibits) about the painters, poets, musicians, dancers and pioneer filmmakers, particularly in Europe, it’s a little surprising to realize we haven’t had much about a man who was the vital link between Europe and the emerging Americans, and who put his stamp on the whole century with the work he introduced and championed, and produced.

Perhaps it has something to do with Alfred Stieglitz being a photographer, the most neglected art of that period. Yet as Jay Bochner demonstrates in this fascinating book, Stieglitz may be our invisible man, but he was that era’s indispensable man.

Beginning as the 19th century ended, Stieglitz was an innovator in photography, and by the first decade of the 20th century, he was in active dialogue with the major innovations in painting. At his New York gallery called 291, Stieglitz offered the first American exhibitions of Matisse and Toulose-Lautrec, and Picasso’s first one man show anywhere. In the pages of his Camera Work periodical, he was one of the first to print Gertrude Stein.

Stieglitz is of course linked to the great American painter, Georgia O’Keeffe, whose work he exhibited before he’d met her, but with whom he had a long and storied romantic relationship. But Stieglitz was the link between European modernists (not just the Paris school, but Italian futurists like Gino Severini, and the Dadaists and Surrealists throughout Europe) and other American artists (Marsden Hartley, John Marin), writers (William Carlos Williams, Hart Crane) and photographers (Paul Strand.) Actors, architects---except perhaps for Charlie Chaplin and early Hollywood filmmakers, there is hardly a significant American in any art who isn’t mentioned in this book about Stieglitz.

Bochner’s book is subtitled “Scenes from…” and that’s accurate. Though it's roughly chronological, there is no central narrative, but there are lots of great stories and observations, both historical and critical. It begins with a riveting description of 1890s New York and the labor strife of the period, provides fascinating context to the famous Armory Show of 1913 which introduced European modernism to New York and America, and spends considerable time with Stieglitz and O’Keeffe.

Bochner can adroitly slip in the deconstructionist code words and semiotic aside, but despite that, he is an engaging writer. There is of course a lot about photography (that’s the focus of the Successionist movement in the title) but he also lavishes teasing pages on the tortured courtship of poet William Carlos Williams and poet/artist Mina Loy, including their husband-and-wife roles in a Provincetown Players production, enduring catcalls during rehearsals from Eugene O’Neill for the shyness of their stage kisses.

I’m sure Bochner is a fine scholar and critic, but he also has that indispensable talent of storytellers: he gets us interested in what fascinates him through what he chooses to describe and narrate. So out of this collection of anecdotes, observations, critiques, forgotten or obscure historical moments that seem formed as responses to unknown interlocutors, emerges an entertaining book and, by the way, an absorbing and gallant portrait of the life and times and undervalued accomplishments of Alfred Stieglitz.
Posted by Captain Future at 2:16 AM No comments:

Monkeyluv
And Other Essays on Our Lives as Animals
By Robert M. Sapolsky
SCRIBNER; 209 PAGES; $24


Robert M. Sapolsky, the author of "A Primate's Memoir," is a professor of biology and neurology at Stanford and lives in San Francisco. The essays collected in this volume, previously published in magazines including Natural History, Discover and the New Yorker, address a variety of subjects in sections titled "Genes and Who We Are," "Our Bodies and Who We Are" and "Society and Who We Are," each with its separate introduction.

Your pleasure and profit in reading this book are apt to be influenced by the extent to which you share the author's sense of humor, which is prominently and persistently displayed. If it makes you laugh and increases your appreciation, good for you. If you find yourself distracted and even cringing, and you wish for more clarity and depth in the place of attempted vaudeville, believe me, I understand.

Review continues at the San Francisco Chronicle Book Review
Posted by Captain Future at 2:58 AM No comments: