"Britain is a very changed country; it has changed morally. It might be said that its people's sense of what life is all about has altered more in the last fifty years than it did in the previous 250, beginning in 1709, when Samuel Johnson was born at Lichfield. Yet one of the things that hasn't changed is the popularity of the nation's most popular word: "nice." When I was growing up, everything worth commenting on could probably be described either as "nice" or, controversially, "not nice." My mother would invite me downstairs for a "nice cup of tea" before I went off to school to be taught lessons by "that nice teacher of yours." At the same time, Prime Minister Edward Heath, who had "a nice smile," was "not being nice to the unions." Tony Blair seemed "very nice" at first, but he wasn't very nice to his friend Gordon Brown. "Nice try," my old headmaster would say if he read this very paragraph, "but your diction could be nicer."

"... these works show us Johnson at his most invigoratingly ethical, committing himself to hardship as he asks writers to depend on the favors of their own talent and nothing else."

"He used Shakespeare, Milton, and Dryden at the head of an army of brilliancy; he sourced and copied over 100,000 examples for the Dictionary to best illustrate the meanings and uses of English words. In doing so he revealed a republic of letters as a rich, voluble, human culture, a summit of what men might do to civilize their days and exalt their common circumstances. The Dictionary indeed is a work of art, encapsulating an almost infinitesimal belief in the magic of poetry and prose. The book reveals nothing less than a living culture represented by marks on paper."

"Like all Christians he made a fetish of the hereafter, but in his best manners Johnson was an angel of the busy earth, a monarch of the secular, thumping up the public highway with a hunger for life and its literary representations."

"'Nothing is too small for such a small thing as man," he once said, a legend that should be engraved on the heart of every journalist worth his salt and every novelist worth her ribbon."

" In his own judgment, there was much to be done and too slender means with which to do it, but he believed that only work, only application, could justify the claims of a writer. Johnson would smile at the way modern authors can fret for years over their novellas, those who cup their works like they are small birds being carried through a blizzard, the outside world aiming only to maim their precious cargo.

No one should be measured by Johnson's yardstick, but his general willingness to ink up and face the world might also serve as a good example to those, writers and readers alike, who see no real distinction between the art of writing and the art of embalming, where a little fluid and a lot of solemnity are used to eke out the appearance of the dead. Johnson had the courage to make his life equal to the task of improving the world that sustained him."

And a quote from Dr. Johnson himself:

"Milton...has judiciously represented the father of mankind, as seized with horror and astonishment at the sight of death.... For surely, nothing can so much disturb the passions, or perplex the intellects of man, as the disruption of his union with visible nature; a separation from all that has hitherto delighted or engaged him; a change not only of the place, but the manner of his being; an entrance into a state not simply which he knows not, but which perhaps he has not faculties to know...the final sentence, and unalterable allotment."
Posted by Captain Future at 7:53 PM No comments: 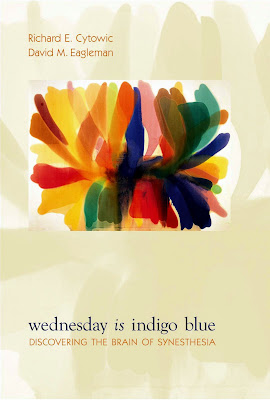 Listen to the color of your dreams, with this fascinating insight into the mysteries of synesthesia, reviewed below.
Posted by Captain Future at 10:53 PM No comments:

The word “village” tastes like sausage, and Cincinnati like cinnamon rolls. The letter “A” is bright yellow, and female. The key of C sounds green, and irritating. The smell of peaches is spherical. The days of the week are each a different color, arrayed in a twisting shape with a smooth surface, superimposed on the scene ahead. A rainbow is a song.

These examples of apparent cross-sensory cross talk are different manifestations of synesthesia, which has long been observed but only recently attracted serious scientific attention. Richard Cytowic has been a dogged pioneer in this study, and this book is the best I’ve seen at describing and analyzing the evidence. Just following the scientific process is half the fun.

It’s an intriguing subject with a fascinating history. For a long time science was skeptical that people really saw with their ears or tasted colors, unless they were mentally ill. The phenomenon got associated with psychedelics (“listen to the color of your dreams”) and was otherwise thought to be inaccurate reporting: people didn’t really hear colors, they were just waxing poetic. That famous cases were artists and writers (Kandinsky, Nabokov) made it seem exotic. Yet common cross-sensory metaphors (hot music, loud colors) suggest that everyone has some synesthesiac understanding.

Cytowic and other researchers found that various kinds of synesthesia are truly experienced by otherwise normal people, who comprise a higher proportion of the population than previously believed. To some extent, synesthesia is a common experience, especially in childhood.

The authors analyze some 40 different types of synesthesia (including sounds that have temperatures or colored shapes, and personalities expressed as smells), which are often experienced in combination. They conclude that these sensations are real, concrete (not metaphorical), automatic, involuntary and conscious, with emotional feelings attached. They come to the startling conclusion that synesthesia is the result of normal brain activity, but this sensory cross talk is usually inhibited in most people.

The authors go into absorbing detail about all the forms and the issues they raise, including how experiencing the world in this way can affect how we conceptualize time and space. One of the pleasures of this book is how it explores the issues, and tests the scientific arguments. There has been a lot of misinformation and bad science on this subject.

Synesthesia can be taken seriously by scientists now, partly because there’s been enough real research to establish it and partly because the technology of brain science is capable of exploring causes. But the culture has more grounds for understanding it also, thanks not only to drug experiences but to aspects of cyberspace and Virtual Reality.

That, combined with the possibility that it’s the product of normal if inhibited brain activity, could be why it’s both weird and familiar, and why some artists can express it. (Those who see music say that Disney’s “Fantasia” is pretty accurate.) It may also be why we can experience it under certain conditions, although chances are better in deep meditation by experienced meditators (the authors say) than from hallucinogens.

It could also be why some of our technology is designed to replicate it. For instance, to design his armor in the Iron Man movie, Robert Downey as scientist Tony Stark uses his hand to move transparent information around that’s projected in space by computer. This is comparable to how some people keep their monthly calendar, without any technological or pharmacological help: just their brains on synesthesia.

There's more on the subject, including a test you can take to see (or hear, or taste) whether you've got synesthesia, at the web site of one of the authors.
Posted by Captain Future at 10:44 PM 1 comment: 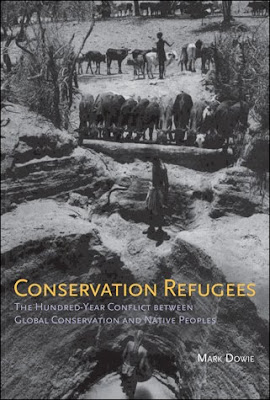 "Conservation Refugees" highlights a conflict and a situation that may be surprising: efforts to save wilderness by evicting the Indigenous peoples who live there. This informative and provocative book is reviewed below.
Posted by Captain Future at 1:51 AM No comments:

It's become common to think of Indigenous peoples as the first environmentalists, but while the reality is more complex, the basic link between the land and the people who have long been part of its ecologies is strong and true. In the late 1980s, when the South American rainforests were a global environmental concern, one of the celebrities making the case--Sting, who started the Rainforest Foundation--made common cause with Indigenous tribes, particularly the Kayapo of Brazil, and stated the principle: the way to save the rainforests is to save the Indigenous peoples who live in them.

Some twenty years later, this is still something of a radical principle, according to the history that journalist Mark Dowie relates in this book. Citing situations in Africa and Asia as well as South and North America, large environmental organizations in league with international development powerhouses have too often attempted to save wilderness areas by moving Indigenous peoples out. The repeated result has been to impoverish and destroy these peoples (with countless individual tragedies) while often enough also failing to really preserve a healthy ecology.

Dowie doesn't dismiss the problems. He acknowledges harmful practices of some Indigenous groups, but argues that it is better to negotiate changes in these practices than to arrogantly dispossess entire peoples, creating these "conservation refugees." It is that arrogance--including that of a largely white environmentalist establishment--that contributes to the misunderstanding and suspicion that has divided two groups that should be natural allies: Native peoples and environmentalists. Dowie argues as well that the idea of wilderness as meaning human-free is another cause of these conservation tragedies.

"One can only wonder what Yosemite would look like today were the descendants of Tenaya still thriving in the valley, sharing the native wisdom accumulated over 4,000 years in the ecosystem, and sharing, as equal partners in the stewardship and management of the park," he writes. "What would be the state of its biotic wealth? Would the grizzly bear and bighorn sheep still roam its meadows and canyons?"

Such observations are backed by reporting in that difficult midrange between the specifically descriptive and the generally conclusive. Readers have to be willing to navigate the acronyms and statistics, but the cumulative effect is a compelling history of global failures and successes in saving the last natural ecosystems, and saving the last Indigenous peoples. The stories are complex as reality, and as human.

Economic development, national and international politics all come into play. But for all the tragedy there is also growing awareness, and sophistication in finding common ground and developing partnerships. There is also the assertion of principle, such as the UN Declaration on the Rights of Indigenous Peoples, the text of which is included in this book.

Conservation Refugees is informative, enlightening and provocative, highlighting a key but neglected feature of a crucial set of problems of planetary significance.
Posted by Captain Future at 12:55 AM No comments: