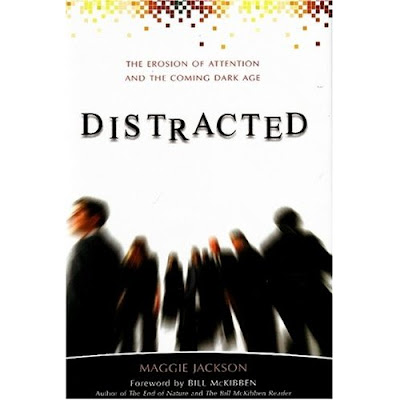 "Distracted" by Maggie Jackson: Are you your own multi-taskmaster?
Posted by Captain Future at 3:51 AM No comments:

So Maggie Jackson is a columnist for the Boston Globe who—that’s mine, new ringtone, like it? Theme from Mad Men. Hi, no way, she did? Maybe, bye. So this book, which Wired Magazine really didn’t like cause—oh man, look at that score! Do you believe this? Anyway, because like multi-tasking: duh. Dude! Text from my mom—I’m like way late for, I don’t know, something. See ya.

The problem with the concept of distraction these days is having a clue about what you might be distracted from. For Maggie Jackson it’s attention and memory, which she sees as the keys to intimacy, meaning and culture. They’re threatened enough--and central enough to civilization--that she’s warning of dark ages ahead.

Actually the great Jane Jacobs’ last book, Dark Ages Ahead, is better on that scenario. But Jackson folds in a lot of reporting as well as facts to make her central argument: “Relying on multitasking as a way of life, we chop up our opportunities and abilities to make big-picture sense of the world and pursue our long-term goals. In the name of efficiency, we are diluting some of the essential qualities that make us human.”

Jackson is worried about consciousness sliced and diced by the technologies conveniently packaged in Iphone arrays, and workplaces now reconfigured because of them. She quotes a study of workers who “not only switch tasks every three minutes during their workday but that nearly half the time they interrupt themselves.” Others are tethered to their jobs 24 hours a day because of these engines of access, so they’re forced to be their own multi-taskmasters. She quotes a psychiatrist asking, “How do you know you have ADD or a severe case of modern life?”

We all know this is crazy, but is it dangerous? If we are indeed “losing skills needed to thrive in an increasingly complex world: deep learning, reasoning, and problem-solving,” then it’s worth considering.

Sure, Jackson goes over the top at times, and it’s ironic that she includes a lot that seems to distract from her central argument. But then, the sideshows of such social screeds are often entertaining (as in another new critique, Blubberland by Elizabeth Farrelly for MIT Press.) Still, when your scope is “how we live and what that means for our individual and collective futures,” you can mostly just start the discussion.

Jackson provides historical background, some deft reporting and even some counter-examples, like the attention being paid to how we pay attention, which includes new interest in forms of Buddhist meditation. Of course, who has time to read it?
Posted by Captain Future at 3:47 AM No comments: 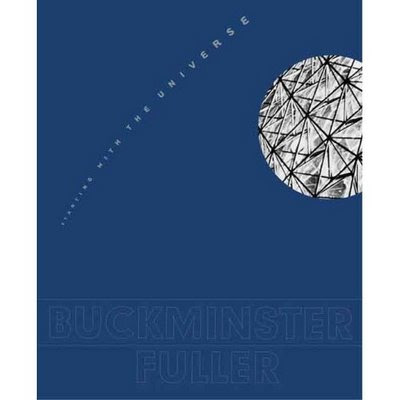 Buckminster Fuller, a "comprehensive anticipatory design-science explorer," famous long ago, but still a voice for the future.
Posted by Captain Future at 4:05 PM No comments:

I’m making a list of people who helped me ruin my life. Marshall McLuhan convinced me that in this high tech age you can live anywhere and be a successful writer. Not really: constant on-site ass-kissing in NYC or LA is still required. Buckminster Fuller convinced me to try writing about large-scale connections and trends. Bad idea: when successful books are about toothpicks or salt, such writing is harder to get published than it is to finish. On the other hand, Fuller could start talking about salt and end up with the universe, the way you’d never thought about it before.

McLuhan was briefly big-time famous, but Fuller was a quieter force for decades, with his greatest fame on college campuses in the 60s and 70s. (I heard him and observed him closer up at M.I.T. in ’73 or so.) Talks of that time were excerpted in Hugh Kenner’s still classic book, Bucky, and in Calvin Tompkins New Yorker profile, which is reprinted in this book. The Tompkins essay is as good an intro to Fuller as anything you'll find.

These days Fuller is best known for the geodesic dome, and one of the essays here is on his contribution to architecture. There are lots of illustrations and photos, since it’s basically an exhibition catalog. But Fuller also introduced the concept of “synergy,” (the whole unpredicted by the parts before they work together) long before corporate consultants pounded it into fairy dust. His ideas on computers and information were practically a blueprint for Google and Wikipedia. And he gave us “spaceship earth.”

The thing about that is he meant it literally, and on many levels. The key to Fuller is that basically he was a sailor. His spaceship earth wasn’t some airy metaphor: earth is a ship that depends on efficient design to stay afloat and keep everyone aboard alive on the food etc. it carries. Ships are designed to make the best possible use of the space within them, as well as of the basic forces of the planet and the universe. (Hence another of his influential ideas: “doing more with less.”) Most technology originated because ships used it (or wars did, or both.)

Which is why he coined the phrase, “utopia or oblivion.” The planet has to be ship-shape or it will sink. It’s an either/or choice.

Fuller was unique. He started not only with first principles, but by re-thinking first principles. He accepted nothing as axiomatic, though he developed his own axioms--and almost his own language. Reading him raw is a very different experience, but having it done it, very worthwhile. The fullest Fuller for me was his Ideas and Integrities.

Kenner makes much of Fuller's childhood experiences as a boy with very bad (and for a long while, uncorrected) vision, whose main relationship was with boats and the sea on a small island. Because he could see only shapes and he had to figure out how those shapes functioned and related to each other, he developed his kind of logic, and his intuition for basic forces and big patterns. Having grown up partly deaf, this rings true to me. Kenner also maintains that Fuller was able to mesmerize large crowds for hours at a time because he was very responsive to the mood, even to individual moods in the audience.

I hope this book helps revive interest in Fuller, particularly when computers and the Internet are providing tools that his vision could guide to profound purposes. This book provides reevaluation and solid overviews of his influence, especially in how he related to both scientists and artists, but it’s just an appetizer for the depth and breadth of his ideas. Though an essayist here writes that he “remained at heart a traditional humanist,” Fuller called himself “a comprehensive anticipatory design-science explorer.” We need more of those.
Posted by Captain Future at 3:48 PM No comments:

From the Personal to the Political

The Warrior: A Mother's Story of a Son at War by Frances Richey. Viking.

When the political intrudes on personal lives, the response is often more than personal. That's the case with these two books, and there are many others.

When Malcolm Kerr, president of the American University of Beirut, was shot and killed, his family found itself involved in the twisted politics of Lebanon and beyond. One Family's Response to Terrorism by Kerr's daughter, Susan Kerr van de Ven is more about the politics and the world, as she researched the causes of her father's death. But she presents this information in the context of her own life, and her changing perceptions of her place in the world. This is an honest, detailed memoir that gains power as it goes, all the more impressive for the hard-won commitment to the rule of law that she affirms.

Frances Richey responded to her son Ben being deployed to Iraq in an intensely personal way that could be expressed only in verse. The Warrior traces her journey as a mother and a teacher dealing with her son's military training. "It was easy to think of warrior/as a yoga posture, until my son/became a Green Beret..." When Ben is deployed, she writes about his letters home and the inevitable memories of his childhood. These verses include ruminations on the world shaped by the political , but they always return to the personal, where the effects are felt, and the consequences come home.
Posted by Captain Future at 3:31 PM No comments: