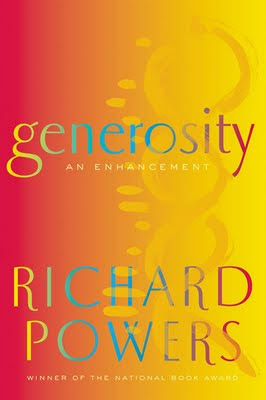 The latest novel by Richard Powers, generously reviewed below.
Posted by Captain Future at 12:34 AM No comments:

Several reviewers of Richard Powers’ last novel (including Margaret Atwood in the New York Times, me in the San Francisco Chronicle) lamented that his recognition in the form of major awards was long overdue. The Gold Bug Variations, Galatea 2.2, Plowing the Dark were among the deserving, while his 2003 opus The Time of Our Singing had Pulitzer Prize written all through it. Then that 2006 novel, The Echo Maker, did win the National Book Award. So now it’s okay to take him seriously.

Powers’ M.O. is as the literary novelist who writes about science, but he examines business, music, race and other subjects with equal amplitude and alacrity. He interrogates computers or genetics because they are important to the times, for his true subject (or so it seems to me) is the historical moment, and its meaning for those living in it.

Generosity involves the genetics of human temperament, in the figure of a young Algerian woman with a troubled history, but who nevertheless seems always and infectiously exuberant. (Powers quotes Kay Redfield Jamison’s study of Exuberance, which I also reviewed for the Chronicle—those were the days.)

After dazzling her repressed professor and her entire evening class in creative writing at a Chicago university, she comes to the attention of the hip host of a TV technology news series, and especially a genetics expert (suggesting a cross between tech prophet Ray Kurzweil and genome guru Craig Venter) who wants to isolate and reproduce the gene for happiness.

Like most of his novels, this one involves the collisions of at least two worlds, through defined and textured characters and places. Generosity has a more unified story than usual: a continuous more than contrapuntal narrative. But there are some subtle complications, too, involving the ways we communicate today, and the enterprise of storytelling itself.

Powers’ novels typically start with sparks flying—nobody’s novels begin with more dazzling virtuosity—and several of his most recent novels ended with a mind-bending and emotional twist. This one starts more deliberately, and ends less exuberantly. In between, he nails our technologically textured world with challenging, disturbing and almost beatific precision. The characters are alive, which keeps you reading and wondering.

Powers belongs in the company of Pynchon and DeLillo as literary analysts of the Zeitgeist. But this work may have a slightly different orientation, suggested by its subtitle, "An Enhancement."

In The Echo Makers there was a background sense of deep environmental crisis. In this novel a few words slip to indicate that the battle is essentially over, and lost. But the focus here is not on science or even the times, but on the people who find themselves living now. With a sweet end-game weariness, a brush-painting economy to the prose, there is a kind of acceptance, a final generosity.
Posted by Captain Future at 12:29 AM No comments: 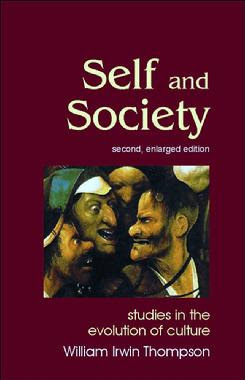 William Irwin Thompson's studies in the evolution of culture, Self and Society, reviewed below.
Posted by Captain Future at 12:09 AM No comments:

Self and Society is an oddly vanilla title for the guy who wrote At the Edge of History, Evil and World Order, Coming Into Being and The Time Falling Bodies Take to Light. William Irwin Thompson burst on the scene in the early 1970s as a counter-cultural intellectual and later a boundary-crossing New Age synthesist of history and future, art and science, media and Gaia. For almost forty years, Thompson has been one of those few writers and speakers that an intelligent and otherwise eclectic and self-defined public looks to for illuminating ideas about what’s really going on in this mixed-up world, and therefore what’s to come. This new and expanded edition of Self and Society is a cumulative summary of his latest thinking.

This book expresses his transition from cultural historian to cultural ecologist, he writes. He spells out this personal journey in more detail in talks recorded in Reimagination of the World (Bear & Company). He elsewhere refers to himself as primarily a poet, and reimagined his own career in Europe, where he wrote a science fiction novel, Islands Out of Time (Bear & Co.) His foreword to that book asserts that character and story are old fashioned delusions (“People who believe in egos write novels with characters.”) Maybe I’ve got a warped sensibility, but I enjoyed this novel for its characters and story.

Though he continues to find guidance in that Old Master, Marshall McLuhan, Thompson adopted ideas and vocabularies from chaos theory and the new physics, as well as the new biology of Lynn Margulis and James Lovelock (Thompson edited two anthologies, Gaia: A Way of Knowing and Gaia 2: Emergence, both from Lindisfarne Press.) Maybe it’s just because I’m not clear on the significance of such concepts as “attractors,” but the vocabulary sometimes gets in the way, and sounds like jargon. Still, Thompson’s use of these new approaches in science is far from the trendy appropriations (and distortions) of some popular New Age authors. They guide him into some profound possibilities.

Though sometimes maddeningly sketchy or abstruse, his ideas are bracing, especially for those immersed in the supposed intellectual mainstream. For example, though he writes about physical and cultural evolution, he finds a lot of trendy evolutionary psychology reductive and misleading. But in this brief review I want to concentrate on what he sees as today’s nascent patterns, moving into the future.

Thompson sees the growth of a planetary culture over the past century, still defining itself. It involves the arts, belief systems and cultural values as well as economics, politics and science. But this is not some gauzy New Age vision. “So when I am writing about the emergence of a new post-religious spirituality that is resonant with science” (exemplifed by the Dalai Lama)...”I am perfectly aware that I am living in the ‘sunset effect’ time of Osama bin Laden and Jerry Falwell.”

Cultural transformation is complicated not only by conflict but by the tendency to “become what we hate,” (for instance, torturers.) Thompson concludes that “if we’re lucky” we may avoid a downslide into a dark age “that could last for centuries” before the new “noetic” future might emerge. That luck would be in avoiding self-annihilation by any combination of ecological and economic catastrophe and weapons of mass destruction.

At times he sees this “luck” as very unlikely, and seems resigned to a civilizational apocalypse. Even in our gigabite-giddy, electronic denial, he’s hardly alone in this analysis, especially in the darkening decades from Reagan through G.W. Bush.

But in his last chapters--blog entries about the 2008 presidential campaign-- his hopes are raised by the election of Barack Obama. Of Obama's speech in Chicago's Grant Park on election night, Thompson writes: “he stood in the moment in which yesterday becomes tomorrow as an entire epoch comes to an end...So yesterday is an age ago, and if tomorrow is filled with new challenges and crises, at least the whole world can now look to them with a new face.”
Posted by Captain Future at 12:05 AM No comments: 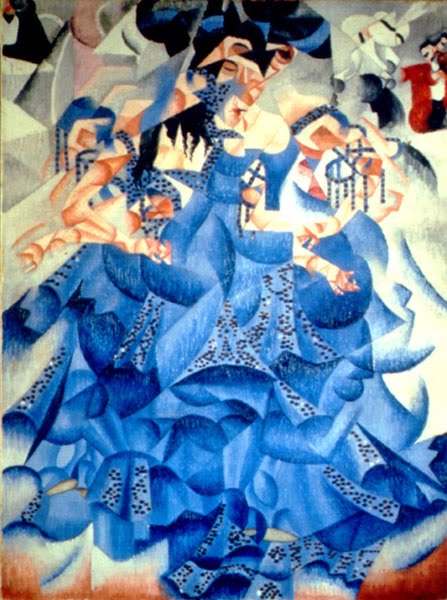 "Blue Dancer" by Gino Severini in 1912, when he made common cause with the Italian Futurists. He would soon be disillusioned and had left the movement by the end of World War I. A review of a new anthology on Futurism in the post below.
Posted by Captain Future at 10:54 PM No comments:

Most books on Futurism I know, such as Futurism by Jane Rye (Studio Vista/Dutton), and Futurist Manifestos edited by Umbro Apollonio (Viking), tend to concentrate on it as an art movement, primarily in painting, especially the publications associated with an exhibit, such as the Museum of Modern Art volume by Joshua Taylor. Or they concentrate on another particular facet of the movement, such as Futurist Performance by Michael Kirby (Dutton.)

But this volume is much more comprehensive (and text-heavy.) Three broad sections (Manifestos and Theoretical Writings, Visual Repertoire, and Creative Works) are introduced by very informative essays, and include rare material, such as manifestos and other writings never published before, at least in English.

Lawrence Rainey’s opening historical overview shows how improvised Futurism actually was, and how it accumulated and mutated around its founder and impresario, F.T. Marinetti. It was almost an accidental movement, arising from Marinetti’s literary endeavors. It might have died out after a brief and local noise if it hadn’t attracted the painters who gave it lasting fame.

Marinetti wrote the first Futurist Manifesto in 1908, but by the end of World War I, most of the significant painters were either dead (Boccioni) or had abandoned Marinetti’s increasingly shrill brand of Futurism (Carra, Severini.) By the time Marinetti became involved with Mussolini and Fascism, they weren’t Futurists anymore.

But Futurism—or simply the idea of a break from stultifying tradition, clearing the deadwood and dreaming up grand utopian plans and ambitions—continued to draw artists of various kinds. This volume documents the entire movement, including often overlooked aspects, like photography.

Futurism continues to fascinate, beyond the significance of the works it generated, arguably not as great as those associated with Surrealism, perhaps Dada and certainly Cubism. The painting in particular relates just as well to all of those other “movements.” (Especially as Gino Severini was in touch with all of these artists in Paris.) Probably the architectural visions of Antonio Sant-Ella had the most substantial direct historical impact.

Italian Futurism arguably led directly to the Russian brand, and was partial inspiration for a number of art movements later in the century. There are echoes of the movement still, in such artistic adventures as the theatrical Neo-Futurists of Chicago.

A century after it began, Futurism remains intriguing partly because it was among the earliest and boldest statements in the arts distinguishing the modern age: the shock of the new. Partly it’s Marinetti’s championing of technology but mostly, I suspect, it’s the word. One of today’s different kind of futurists, computer scientist Eric Paulos issued his own “manifesto” on the 100th anniversary of Marinetti’s first Futurist manifesto.

In any case, this anthology is likely to be a major reference work for anyone interested in the early 20th century Futurist movement. The illustrations are only in black and white, but it does reproduce some of the typographical experiments. The introductions by Rainey, Poggi and Wittman are not only cogent but brisk and skillfully written, largely free of jargon and as potentially interesting to the general reader as the aesthetic specialist or scholar.
Posted by Captain Future at 10:47 PM No comments: