We've All Come to Look For America

My recent reading has tended to center on the 20th century, especially the 30s and 40s.  As usual it's been partly intentional, partly serendipitous, as one book led naturally to another. 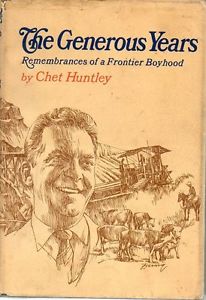 One hand of chance was finding a 1968 first edition of The Generous Years by Chet Huntley, in a "free box" on the street (common in our campus town as students move out.)  This particular volume had been a gift.  Though the recipient's name is smudged, it appears to have been a birthday gift from "Mary Ellen & Lyle," when this book was new.

This is Huntley's vivid autobiographical account of his early years in the northern Montana frontier--literally a frontier, for his family was among the first to settle and attempt ranching and farming on this recently available government-deeded land.

It was incredible to me that this was Chet Huntley's early 20th century childhood--the newscaster on the Huntley-Brinkley report I watched in the 1960s, reporting on the space program.  His writing is surprisingly precise, descriptive and evocative. (Surprising perhaps because his on-camera persona was so spare and matter of fact.) Through his recollections, the specifics of the land and the times as he experienced them says a lot more generally about America in the first 30 years or so of the 20th century. 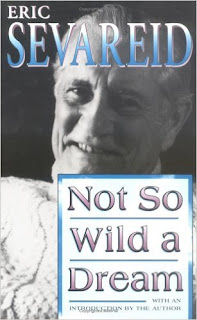 Also by chance I happened on a video version of another TV journalist's autobiography (though it's likely that it caught my eye because I'd started reading the Huntley book.)  It was so fascinating that I got a copy of the book itself--Not So Wild A Dream by Eric Sevareid.  Originally published in 1946, it is a more lengthy autobiography covering more of his life.  The edition I got (U. of Missouri Press 1995) includes an introduction he wrote for the 1976 anniversary edition.

I knew Sevareid from his reporting and commentaries on the CBS television news, and I have a vague idea I saw him in person once covering the 1972 McGovern campaign.  His boyhood in North Dakota had definite similarities to Huntley's though his book also covers his college years and early reporting in Minnesota, his pre-World War II reporting in Europe, and his war reporting in China, Africa, Italy, Paris and London (where he began and ended the war, working with Edward R. Murrow.)

It's a fascinating book, not only for the pith and depth of his thoughts but for his sharp scene creation and narrative.  The book describes at least two outsized adventures, once when he was young, and another when he survived an emergency parachute jump and several weeks among a tribe of headhunters in remote Asian mountains.

The book has a shape as well.  It begins describing the functioning democracy of his small North Dakota town of Velva, and ends with the end of the war that tied the world together as never before, with a new role for the US.  "America was involved in the world, all its little Velvas were in the world, and the world was now in them, and neither the world nor America would ever be the same."

The bulk of this book about the late 30s and 40s is a window on that era, and on what the war meant to those close to it.  Sevareid's title--Not So Wild A Dream--is a quote taken from one of the most famous radio programs to that date, "On A Note of Triumph," about the end of the war in Europe, written by Norman Corwin. 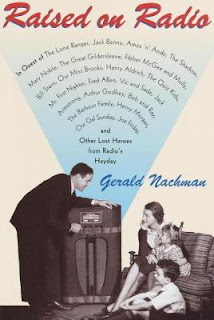 A separate stream of my reading had already brought me to Corwin.  I came upon Gerald Nachman's Raised on Radio among books that Margaret had on her office shelves as she prepared to retire from chair of the theatre, film and dance department.  From this book I learned how many more than I realized of the early TV programs I watched as a child were originally radio shows, and I learned about Norman Corwin.

I didn't know the name, but Norman Corwin was famous and influential from the late 30s into the 50s, but most prominently during World War II.  As a writer, producer and director, he was variously called the Bard, the poet laureate, the Shakespeare of radio.  Corwin's works, Nachman writes, "were sui generis, blending drama, history, journalism, verse, narrative, music, and sound into a kind of radio tone poem, using the finest actors, composers, poets and special effects available."

Yet as strange as they may sound now they were very popular programs, and CBS gave Corwin a free hand, never even asking to see scripts in advance.  There are several of the actual broadcasts available on the Internet, including "Untitled" , and the more directly topical (and patriotic) "We Hold These Truths" and the aforementioned "On A Note of Triumph," probably the most famous of his many World War II programs.  They still sound impressive. 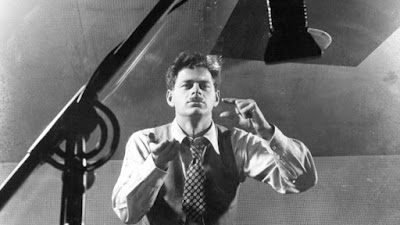 Scripts for a selection of mostly World War II programs comprise the volume  Untitled And Other Radio Dramas by Norman Corwin (Holt 1947--available in libraries and ex-library used.) Especially with Corwin's explanatory postscripts, it is a document of the times, with insights well beyond the surviving cliches about WWII.  Some of these scripts were subsequently done on stage all around the US and elsewhere in the world.

I suppose the chief surprises, especially in the postscripts, are a couple of cliches knocked down.  We think of soldiers marching off to fight Hitler with a firm idea of what they were fighting for, and everybody on the homefront pitching in happily to do their bit for the boys in uniform.  In fact, a lot of businesses and individuals groused about wartime restrictions, including businesses on the coasts that were irate about being told to turn out their lights so that American transport ships weren't sitting ducks for enemy submarines.  And a lot of soldiers--and the general public--had no idea what the war was about.

So Corwin gave an American's perspective on England (the two peoples were not especially close at the time) with a series about an American's experiences visiting England.  He made founding concepts contemporary--and gave them some flesh and blood--in "We Hold These Truths."  And so on.

Another insight lost in the cliches was a purpose that gets ignored but that Corwin emphasizes--bringing the values of equality and cooperation that helped win the war into a lasting peace--not another debacle like the Great War's end.  It meant in part sustaining international cooperation, raising standards of living, and breaking down old barriers like the class system.  They weren't fighting just to defeat evil.  They were fighting for a better future.

That was expressed for example in those final words of "On A Note of Triumph" that Sevareid quotes: "Post proofs that brotherhood is no so wild a dream as those who profit by postponing it pretend..." 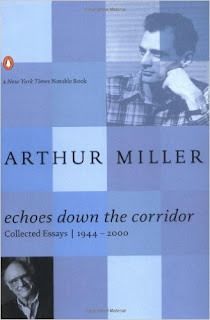 Also (and not unrelated) in these months I read playwright Arthur Miller's collected prose pieces (Echoes Down the Corridor) and re-read his autobiography (Timebends.)  I'm currently reading the third volume of his Collected Plays (Library of America) which includes his unjustifiably neglected late plays and some early work, including--for the first time in print--his 1930s/40s radio plays, commissioned by Norman Corwin.
Posted by Captain Future at 12:51 AM No comments: