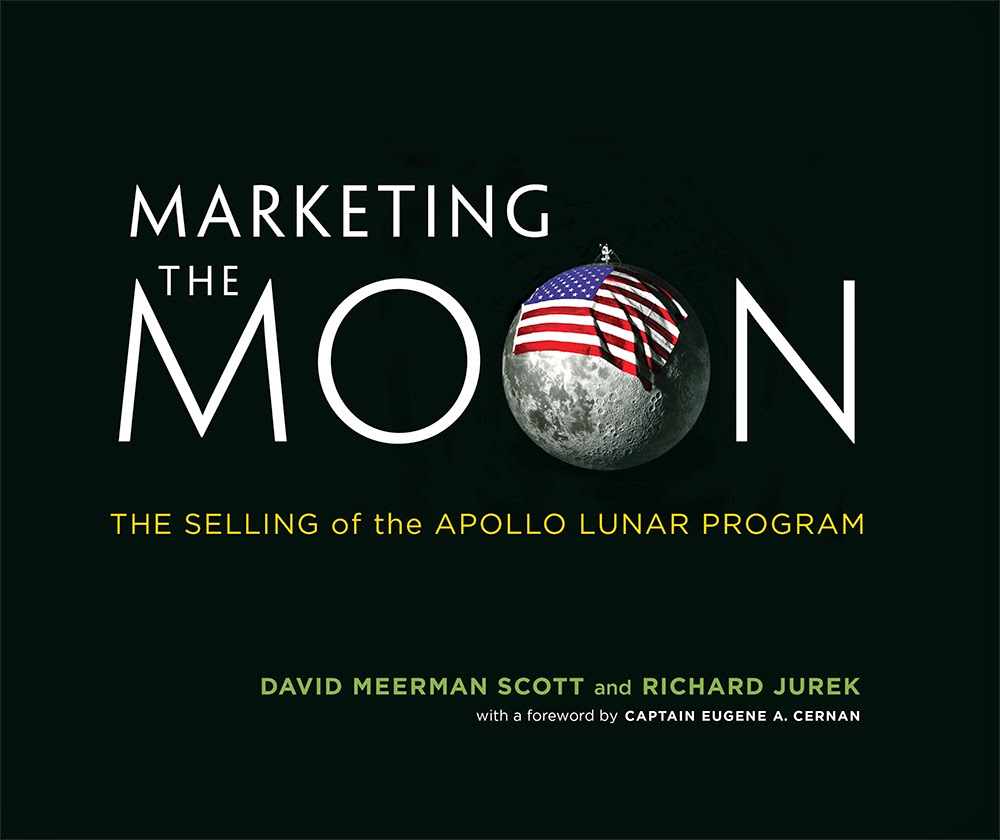 Marketing the Moon: The Selling of the Apollo Lunar Program
By David Meerman Scott and Richard Jurek
MIT Press

Forty-five years ago today, a human being first set foot on another world. Some 600 million people on Earth were watching and listening as Neil Armstrong descended to the surface of the Moon from the Apollo 11 lunar lander, saying (in words slightly obscured by static) "That's one small step for a man, one giant leap for mankind."

Earlier in this 45th anniversary year, MIT Press published Marketing the Moon: The Selling of the Apollo Lunar Program by David Meerman Scott and Richard Jurek. I liked everything about this book except the title, which suggests a conscious and coordinated campaign of hype and spin. The book's contents tell a different story. Though NASA and the major corporations involved in this titanic effort all had public relations and marketing people, NASA set the standard by insisting that the media be given full factual information. There was plenty of hoopla surrounding the astronauts in particular, but a lot of that was generated by media responding to the burst of public interest that caught everyone by surprise.

As this book says (and other sources affirm), well into the 1950s the idea of rocketing humans into space was considered to be science fiction fantasy, believed only by children. The Eisenhower administration itself was skeptical, though the U.S. government was confident that its plans to send a satellite into orbit as part of the 1957-8 International Geophysical Year would be the first such endeavor.

But early in the 50s, some magazine articles accompanied by dramatic cover art in Colliers plus the 3 Walt Disney programs beginning with "Man in Space" stirred some public interest. Then came the shock of Soviet space firsts--the first satellite (Sputnik), the first live animal, the first man and the first woman in Earth orbit. Humans in space was no longer a fantasy.

After a few disasters (including at least one on live TV), the U.S. Army and Navy succeeded in getting satellites up. The civilian agency NASA was created, and suddenly the astronauts became heroic celebrities. After two sub-orbital flights, John Glenn became the first American to orbit the Earth. Shortly afterwards, President John F. Kennedy issued his famous challenge: to land a man on the Moon and return him safely before the end of the 1960s.

After a string of successful one-person flights (the Mercury program) and two-person orbits mostly testing procedures and equipment for the moon shot (Gemini), the Apollo program began with an horrific tragedy: during a ground test, a fire aboard the crew capsule killed three astronauts, including the second American in space, Virgil Grissom. After months of reappraisal and redesign, Apollo flights began, and continued at a pretty rapid clip that kept the astronauts in the news and built to the moment of Apollo 11.

But for the next 6 Apollo flights, public interest dropped gradually and then precipitously. "Few people alive on December 14, 1972, can tell you where they were on that day," this book notes. But it was the day that the last humans to ever go there left the moon. No one has been back since.

This book continues examining the coverage and marketing efforts after Apollo 11 and speculates on why interest dropped so far so fast. Television coverage of the space program increased network news prestige--particularly CBS--but lost money, so after Armstrong it was cut back severely. Other factors are suggested, notably that the goal of landing an American on the moon was basically Cold War competition with the Soviets, and after Apollo 11, it was game over, the home team won.

The authors also note how much else was going on to absorb public attention, and having lived through those years, that's certainly pertinent: the Vietnam war and associated actions in Southeast Asia, antiwar demonstrations, racial unrest, Kent State, the 1972 presidential campaign and the first Watergate stories were all happening between Apollo 11 and 17.

The book repeats the assertion that the rise of the environmental movement in those years--partly inspired not at all ironically by the now iconic views of Earth in space, and the "earthrise" photos from the moon taken by Apollo astronauts--diverted attention from out there.

All of that I recall as at least partially true.  But there was also the relentless pace of U.S. space flights. I saw them all on TV, from Explorer and Vanguard in 1958 through the Apollo shots more than a decade later. I don't think people were totally fixated on the winning the space race aspect, but nobody could sustain excitement and the same keen interest for all those events. Rockets to space were getting to be a regular thing.

Also, NASA had apparently concentrated so hard on getting humans to the Moon that they didn't come up with much for them to do there that was interesting, such as scientific exploration and experiments that could be communicated in an involving and exciting way. 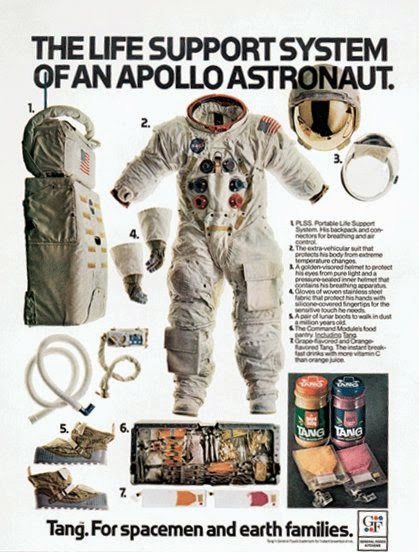 This book does an admirable job of chronicling how NASA and the institutions involved got the information out, and how the media went about covering the stories. There was a marketing concern, since it was felt that public interest would encourage Congress to keep funding the space program, but there were also concerns to keep commercialism from tainting the patriotic effort, leading to a shifting dance on what corporations could and couldn't do to publicize their part of the space program. (Apart from major contractors, the winner on becoming identified with the astronauts was clearly Tang. If you were there, you know what I'm talking about.)

This is a large format "coffee-table" book with lots of photos and sidebars. Written by two public relations professionals, it not only tells the public information story but features enough documentary information (including transcripts of key Apollo moments) to be a good resource on the space program itself. It seems to fulfill the NASA ideal of being as objective and complete as possible. Though this was supposedly the Mad Men era, and there was a circus aspect to events like the parades and tours, this book affirms that there really was a feeling of common purpose that permeated the space program and extended to the media. The story of humans in space, of humanity on the Moon, was so powerful and inspiring that it often overrode selfishness and spin.

Today we know how many things went wrong as the Eagle was trying to land on July 20, 1969. But somehow it did land, and that moment inspires awe even today. Perhaps even more so, since such a voyage has returned to the realm of fantasy, only with better visual effects.
Posted by Captain Future at 12:30 AM 1 comment: 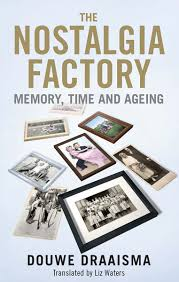 As a professor in the history of psychology, Douwe Draaisma seems perfectly placed to write about memory, the access we have to our own usually sparsely documented histories. This book is about memory and memories of the aging, the old. When people reach their sixties and seventies and beyond, what do they remember? And what do they forget?

In this relatively short book, Draaima deals with both aspects of memory in the aging mind: the forgetting, and the remembering. He is reassuring on the forgetting. After reviewing various memory techniques (most of dubious value) he writes: “However active your lifestyle, however varied your existence, your memory will gradually decline with age. This is perfectly natural. Anyone who still has the memory of a twenty-year-old at the age of seventy is not entirely normal.”

Everyone is annoyed by not being able to remember something, but the worry has increased with the increased awareness of various forms of dementia, especially Alzheimer’s disease. Draaima reiterates the statistics—for people over 65, less than 5% are likely to be stricken, and even having a parent who has suffered from dementia still doesn’t get you to 10%.

On the remembering however, Draaisma finds some anomalies and mysteries. He carefully reviews a number of studies (his and others) to conclude that yes, the old tend to remember the distant past better than the recent past, and more specifically, their most vivid memories cluster around their 20th year. Other memories that often remain vivid are of “firsts”--first kiss, first eclipse, first day of school etc.

He is thorough on the phenomena: how the focus on the past increases with age, for instance. He writes about residents of an old folks home in their 80s and 90s who no interest in their present, not even people around them. Their listlessness turns to vibrant interest when shown obsolete artifacts and photos from their youth. They even begin to interact—members of such group found that they came from the same town and even went to the same school around the same time.

His research affirms that when the reminiscence effect (as he calls it) "attains its full force, memories will return to which you have long been denied access. These are memories that really do slumber.”

His research also suggests that as time goes on, memories emerge more and more as stories. He interviewed centenarians who hadn’t written autobiographies, “yet the stories of their lives have the usual cast of characters and twists and turns that we see in the autobiographical genre. The event that started it all, the moment that brought a complete change of course, the meeting that was to have important consequences, the lesson for life, even the insults that seem to make so much more of an impression in youth—they emerge of their own accord when the centenarians look back over their long lives.”

Draaisma recognizes that evolutionary explanations for this phenomenon are inadequate, but doesn’t offer a persuasive alternative. A different kind of psychologist (like James Hillman) would suggest a search for meaning, a deepening of soul, a completion.  The anomalies are found in what people remember (or think they are remembering) and how they characterize the past.  The mystery is in why we are helplessly borne back into the past as our future disappears.
Posted by Captain Future at 12:56 AM No comments: