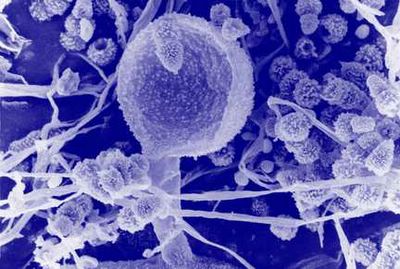 where the fungi hits the evolutionary road

Posted by Captain Future at 12:01 AM No comments:

'>Evolution in Four Dimensions: Genetic, Epigenetic, Behavioral and Symbolic Variation in the History of Life
By Eva Jablonka and Marion J. Lamb
With illustrations by Anna Zeligowski
MIT Press. $34.95

It's the genes, stupid. That's been the battle cry of the orthodox Darwinists (or neo-post-Darwinists if you prefer) in aggressive defense of Darwin's theory of evolution by natural selection.

They used it as the simple, all-purpose weapon to defend against the assault from reactionary forces, revived since Darwin's day and especially since the Scopes "monkey trial" humiliated them and (some say) fueled the so-called Christian fundamentalist movement. That well-financed and messianic movement, with no visible twinges of conscience restraining the scorched earth deployment of hyperbole, character assassination, vitriol, mendacity, harassment and even violence, has successfully returned biological evolution---and with it many basic operating assumptions of science---into the realm of ideological politics. School boards are harrowed, and institutions intimidated. Recently IMAX withdrew from exhibition a film that referred to Darwinian evolution, the basics of which are fundamental to most of modern science and the modern description of reality.

In the battles between the "reality-based" or fact-based, and the "faith-based," such a single powerful idea as the supreme gene, was easily employed and zealously defended--a kind of scientific nuclear device. But those questioning it weren't only reactionaries who deny that evolution took place or that the earth is more than a few thousand years old, or even those who obscure a faith-based model in the appealing jargon of "intelligent design." (Though both intelligence and design are open questions, these politically motivated operations seem to seldom be sincere attempts to address them.)

The questioning was also coming from other scientists, who risked being tarred with the same reactionary brush by the more virulent defenders of Darwinian orthodoxy, who sometimes adopted the tenor and tactics of their reactionary foes. For awhile these subversives were held at bay, but perhaps no longer.

Some charged that the simplicity of orthodox claims was supported by an unduly narrow range of evidence. Most evidence, as in Darwin's day, was from large animals. Challenges came from microbiology and molecular biology, from the study of very small life forms. Lynn Margulis was one of those leading the charge with her forceful research, forceful thinking, and forceful advocacy and writing. '>Acquiring Genomes by Margulis and Dorion Sagan is a landmark work, and highly readable.

But challenges were launched from many other directions. '>Stephen J. Gould (who probably disagreed with Margulis as much as captain of the orthodox team, '>Richard Dawkins) took the heat for awhile. Several summaries of various challenges meant for non-specialists appeared, such as '>Alas Poor Darwin by Hilary and Stephen Rose, and the one I found most informative and balanced in terms of reporting and rhetoric: '>Darwin's Blind Spot by Frank Ryan. (There are several other books on the history and controversy cited in the volume under review, including Bowler's '>Evolution: The History of An Idea and Brown's '>The Darwin Wars) .

Now comes '>Evolution in Four Dimensions, which combines detailed descriptions of the science with conscientious and creative attempts to clarify the situation for the non-specialist reader, in the process of producing a real synthesis, and something like the outlines of a new theory in the Darwinian tradition that takes into account the increasing collections of evidence that tends to poke holes in the "genecentric" orthodoxy.

One more motivation for that orthodoxy ought to be mentioned. The hoopla surrounding the Human Genome Project several years ago wasn't all about the wonders of science, as if we were witnessing the equivalent of the first moon landing. Pharmaceutical companies and other corporate interests were salivating like Pavlov's dogs at the prospect of developing and selling gene therapies to offer cures of diseases and conditions as well as a menu of enhancements for their better-off customers. All of that might be possible once the genome was identified, assuming that it is indeed all about the genes. Well, stupid, it's not, and the revolution promised by the genome project is on hold.

The genecentric dogma supported some political views, such as a neo-social Darwinism of the selfish organism composed of selfish genes. Evidence from the human and animal worlds of altruism and empathy and other unselfish behavior got twisted and scorned. The social was supposed to be a kind of illusion, because only the individual's genes really counted. So the idea that culture or learning or even consciousness could combine to successfully create new behavior, perhaps even on levels beyond individuals, was considered hopeless, counter to the biological imperative.

This orthodoxy also supported the idea that humans were a kind of programmable machine, an android with perhaps too much wetware. So the AI crowd was happy with it, too. The mechanistic and deterministic bias also supported the meme theme craze (mental genes operating as what we used to call fads), leaving little to the imagination, and providing a whif of scientific pizzazz to political p.r. consultants.

Finally, there is the scientific bias for the simple (or "elegant") explanation. However as science gets beyond the more obvious and into the more fundamental, we may find that the fundamental is complex.

In any case, though there may be a biological imperative, we clearly don't yet know what it is. These authors explain how the possibilities have expanded in the areas of heredity and evolution. In addition to the genes, they outline evidence for three other factors involved: the epigenetic (transmission of traits on the cellular level but not involving DNA), behavioral (social learning transmitted through generations, which includes animal behavior) and symbolic (language and other forms of symbolic communication, mostly but not necessarily only operative in humans.)

Simply presenting these four dimensions with illustrative examples and explanations would be useful and provocative. But this book goes beyond that description to suggesting how these dimensions interact, how they may have originated and what roles they may have played in evolution. They also tackle larger issues, including moral questions that follow from this approach.

Though many readers may find this book to be densely technical, but with effort and attention, quite coherent, most readers will learn plenty even without engaging all the detail, especially from the summaries and dialogues (with a kind of devil's advocate) that these authors provide. Because the contents have apparently been road-tested with audiences, this book is a resource, a volume that can be studied and used repeatedly.

This is an important book. It will be a revelation to many, and it is a solid beginning to an important dialogue in science and beyond, with very important societal implications. In broadening evolution beyond genes, it opens up new vistas for many areas of knowledge, and how they interrelate to form our dominant conception of who we are and what the world we're in is all about. It is a vital step in an important shift in conventional wisdom.

For example, I know one of the pioneers of the study of human altruism, whose work was sociological. But one question that his audiences often had, and which bothered him as well, was whether there was a genetic basis for this behavior---whether, as he put it, there is "a gene for altruism." For many people, altruism couldn’t be considered “real” without a genetic basis. With a better understanding of the dimensions of evolution, this question becomes less meaningful. The way is open to showing that altruism is truly part of our inheritance.

Science is troubled territory these days, threatened by political and corporate pressures. One hopeful sign is an increasing diversity among scientists. Women, for example, have made usually unacknowledged contributions throughout the history of western science, but more are becoming prominent in their fields today. These authors, with distinguished careers in related fields of the history and philosophy of science, are prime examples. Since in this book they skewer the theory proposed in a popular book a few years ago that men are by nature rapists (a logical outcome of the selfish gene dogma), I won't engage in gender-based determinism. But the history of science as well as of the emergence of other suppressed social groups suggests that more women in science may bring more collaborative attitudes and greater openness to complexity.


Defending against political and "faith-based" challenges aren't the only reasons why this or any orthodoxy maintains itself. Scientists are human beings, with the same unexamined unconscious fears, needs and motivations as other humans. Despite pieties about evaluating evidence and coming to a conclusion, scientific theories are maintained for all kinds of less rational reasons.

Apart from personal and career motives, from group needs to maintain positions or keep jobs or make money, there seems to be a strong need to believe in the central dogma. We all know at least a little about the controversies over evolution in Darwin's day, though a lot of that little is likely to be inaccurate. But the extent to which Darwin's ideas, and the science that preceded and supported his theories, challenged the basic views of real people at the time, is remarkable. This is the subject of Keith Thompson's fascinating new book, '>Before Darwin: Reconciling God and Nature.

Consider Dr. Plot, a 17th century Doctor of Laws in England who wrote extensively about the fossils then being discovered, laboring mightily to reconcile fossil evidence with the reigning orthodoxy concerning the natural world, largely derived from the Bible. As his possible explanations for what turned out to be fossil dinosaur bones dwindled, the desperate imagination of Dr. Plot thickened to include the idea that such bones were actually left by a race of human giants, which had the virtue of being mentioned in Genesis.

But while it is easy to laugh at an obscure figure, consider also that Thomas Jefferson could not accept the idea that some animal forms had gone extinct. When mastodon bones were found, there were those who theorized that these animals weren't extinct, but simply were living where no man had gone before. (A plot for many intriguing adventure stories and sci-fi films.) Thomson claims that in addition to the other purposes of their epic journey in the American West, Jefferson charged Lewis and Clark with searching for mastodons.

Thomson's book is timely, entertaining and enlightening. It provides a human dimension to these controversies when they first appeared, and a window on what is to me a fascinating period, when most of the science in these fields was being done by what today would be considered amateurs---people initially trained in another profession, who might still practice law or perform their duties as clerics, but whose obsession with aspects of the natural world, combined with great energy and intellectual rigor, advanced and in some ways invented several earth and biological sciences.

Their intellectual interests were sometimes widely shared, as newspapers followed the latest findings and theories, and fossil-hunting and geological outings on the weekend became fashionable pursuits. In fact it was only when the expanding industrial revolution needed more and more applied science, that specialization and professionalism began. The word "scientist" didn't even exist until the mid 19th century. Before that it was more integrated into a larger sense of knowledge and the nature of reality (which is partly why so many were troubled by contradictions between new discoveries and religious worldviews), and more open to innocent enthusiasm. So as Thomson's book shows, even the conscientious doubters and skeptics played a role, as did the dogged subversives, like Darwin in his day.

Darwin was himself torn between orthodoxy and the faith-based worldview. This book follows that central problem of the subtitle. Even though the Catholic church, for example, found a way to accomodate Darwin's theories, the struggle obviously goes on.
Posted by Captain Future at 11:20 PM No comments: