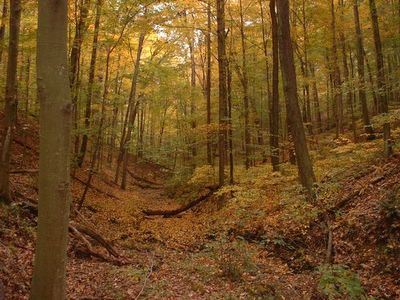 A swale in the Hoosier National Forest.

Posted by Captain Future at 11:31 PM No comments:

A Trinity from Trinity

Barbara Ras is one of those friends it is sometimes hard for me to believe I haven't actually met. I may have spoken to her once on the phone, but almost our entire relationship over the past 8 or 9 years has been through emails and through our respective writing.

Barbara was the editor in chief at University of Georgia Press back then, and has since taken over and, as far as I can tell, essentially transformed Trinity University Press. Trinity specializes in her two chief areas of interests, the natural world and literature, as well as specifically Texan topics (it's in San Antonio.)

She is also a widely published and award-winning poet, and she recently sent me her new collection, One Hidden Stuff (Penguin). It reflects those Trinity concerns as well, in the context of her life and our times. She works with long lines, so it helps that she has a sure sense of rhythm. As a reader as well as a writer, rhythm is very important to me, in prose, in dialogue and especially in poetry. Appropriately then, the book begins with "Rhapsody Today." The first lines flow melodically, until a slight pause in the fourth for a fine effect, a fawn on gawky legs with "some leftover dazed grace," and so we see the fawn's motion standing still.

My current favorites among these enticing poems come towards the end of the book, like "Late Summer Night" which seems to have been written soon after her move to Texas, and reminds me of the surprising dislocation I felt after my latest move, to California. "Sometimes Like the Ocean" makes poetry from the poetics of a dream, and "Elsewhere" merges the horror of distant war with more personal loss, within the theme of motherhood. "Our Flowers" seems to contain all the elements of previous poems in the book, and contains a favorite line: " Failure is such a beautiful word for something/lousy..." I'm glad for the opportunity to read these poems, and to have them around to read again, and I'll bet you will be, too.

As it happened, two books from Trinity Press itself arrived soon after. In A Special Light by Elroy Bode is a book of essays heavy on reminicence and observation of the Texas hill country. That's not a landscape that frankly attracts me much, but I found myself beguiled by Bode's prose and his memories of times if not places we've shared. The conversational style is most obvious in the very short chapters but its flow, and Bode's way with the particular, can keep you reading despite yourself, or the call of supposedly more urgent matters.

The mail occasionally brings a treasure, and that's the word for Home Ground: Language for an American Landscape, edited by Barry Lopez. It's a kind of dictionary of terms pertaining to the landscape, with definitions by a number of distinguished writers, including William Kittredge, Greta Ehrlich, Bill McKibben, Barbara Kingsolver, Linda Hogan and Charles Frazier. Some 45 writers participated, in a three year first draft process with managing editor Debra Gwartney, and another year with Lopez.

My first thought was quite practical--at last a companion to reading the likes of Jim Harrison, only instead of a few line definition of "swale"in the standard dictionary, here is a full page--with history, examples and an illustration! But besides ignoramuses like me, I'm sure people who know these words from familiarity with what they denote will find something in these definitions to light them up as well. There are regional terms and words from folklore that have fallen out of use, plus examples of their use from literary works.

Start at any page and there's something interesting. Barbara Kingsolver provides a precise definition of "derramadero" right after she defines "derelict land" as "Land that has been used, ruined, and consequently abandoned by humans is peculiarly described as derelict--as if the land itself had become careless of its duties." The San Francisco Chronicle review goes into more detail. This volume becomes an instant reference resource, while itself being a connection to place and a portrait of the American landscape.
Posted by Captain Future at 6:38 PM No comments: 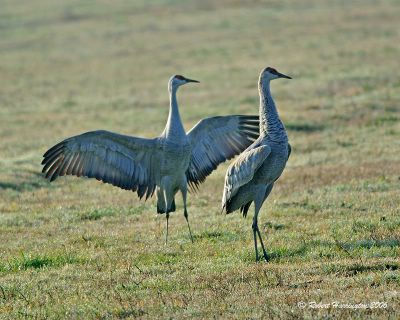 Posted by Captain Future at 2:42 AM No comments:

A different version of this review appeared in the San Francisco Chronicle.

That Richard Powers did not win the Pulitzer for his 2003 novel, The Time of Our Singing, or the National Book Award for Plowing the Dark (2000) astonishes me. He’s generally considered to be among America’s foremost novelists, but as an academic in Illinois, he’s overlooked in Flyoverland. Perhaps a New York character in his new novel will help.

As publishing converts to the condition of Hollywood, I imagine this book being pitched as “Oliver Sacks meets Aldo Leopold on CSI.” Gerald Weber, a Sacks-like neuroscientist and essayist in New York (Sacks wrote the bestsellers, Anticipations and The Man Who Mistook His Wife for a Hat), is drawn to Kearney, Nebraska to meet Mark, a man who mistakes his sister for an actress pretending to be his sister. Mark is a 27-year-old worker in a slaughterhouse whose car crashes on an empty highway. Desperate to help him, his older sister Karin contacts Weber, who can’t resist the chance to observe someone with this very rare disorder caused by the accident.

Mark valiantly improvises a version of reality to account for his persistent feeling that he’s trapped in someone else’s dream, which Powers renders with a convincing seamlessness (including a few neurologically-justified Joycean leaps). Mark’s fierce insistence on his half-constructed delusions begins to affect Karin and Weber, prodding their own self-doubts. They all meet and are affected by Barbara, a mysterious nurse’s aide. Meanwhile, Karin renews relationships with two old flames who turn out to be on opposite sides of a dispute affecting what is becoming the town’s biggest industry: the annual presence of migrating sandhill cranes, and the tourists they attract.

Traditional mysteries propel the narrative: what happened on that dark stretch of highway? Mark can’t remember the accident, the police find three sets of tire tracks, but someone who was apparently there has left a note by Mark’s bedside, and vanished. Who made the other tire tracks and why? Who called in the accident, and who wrote the enigmatic note? (And for the whodunit fans in each of us, all is revealed, with not-quite the mystic symmetry of the conclusion to Powers’ last two novels.) There are also the familiar novelistic conundrums of personality and relationships: What are the true motives of Karin’s lovers, and which will she choose? Who is Barbara—cipher, saint or something else? Will Mark recover, and will anyone else?

But of course this is a Richard Powers novel—the writer who has previously dealt with relationships of image and time, molecular biology and Bach, human and artificial intelligence, the corporate body and the human body, race and culture, terror and magic. So there are deeper mysteries as well, prompted by mind science and crucial in our lives: what really is the relationship of memories to exterior events? Do we construct stories to explain reality, or recollect reality according to the stories we tell ourselves? What indeed is a person-- what identity holds together beings who are “every second being born?”


For all their explorations of ideas, Powers novels are always grounded in place and time. This one occurs just as the current Iraq war is beginning, but this well-storied place is even more significant: the Nebraska of fiction from Willa Cather through Jim Harrison, Ted Kooser’s poetry and essays by John Janovy and other naturalists. Powers finds a contemporary part of it to make his own, in the urbanized, small-city landscape, with brief but significant forays into the realm of the cranes.

The cranes are “…the oldest flying things on earth, one stutter-step away from pterodactyls.” Half a million fly from Mexico and the southwest to stop for the last weeks of winter along the Platte river, before continuing to the Arctic. Partly because of the apparent speech of their calls, the cranes have symbolic power: Powers notes that the name of one Native American tribe’s crane clan translates as the Echo Makers. Echoes reflect, refract, double and distort. Description is a kind of echo, affected by the physics of time, distance and substance, as is mental reflection and perception itself, in individuals, society and the species. Emotion and instinct, personal history and parental echoes are part of the ongoing song.

But the cranes have more than metaphorical weight—their plight signals a physical crisis. Daniel, Karin’s environmentalist lover, notes that the greater number of cranes coming to Kearney actually mean that their days are numbered—this is one of the last habitats left for them to gather along their migratory route. Like the last part of Plowing the Dark, there’s a definite apocalyptic feel to this novel, intimations of an imminent and unstoppable finality, and of people dealing with this fragility in their individual ways, including those who listen to what these greater forces ask of them.

The mysteries of perception and cognition, of normality and dysfunction, of reality and dream--all of them are louder echoes of the most pressing mystery that Powers begins to deal with here: the neglected relationship of human beings with the rest of nature, as well as their own. Recalling a Native American legend, he writes “When animals and people all spoke the same language, crane calls said exactly what they meant. Now we live in unclear echoes.” And then he quotes a bit of scripture that may have inspired more than one of his books: “The turtledove, swallow, and crane keep the time of their coming…”


Powers’ prose is sensual and musical; he writes mostly convincing characters, and he structures story to meet a reader’s needs as well as for more subtle purposes. So even though this is a novel with multiple resonance, it’s also readable in the airplane’s stale oxygen drone. But beware: this novel will echo beyond the airport. It may even suggest that the echo of reality is all that we have, and to that music we improvise our lives with as much grace as we can. Or as Barbara says to Weber as they observe the cranes at dawn: everything dances.
Posted by Captain Future at 1:59 AM No comments: