At his blog via Daily Beast, Andrew Sullivan answers a reader's question each day.  This response is about the state of book publishing.  I can't find much to argue with in his answer.
Update: But I think he is all wrong about ebooks, for the reasons his own readers suggest.  That is, I am sure ebooks have their place in the ecology of publishing and reading, but until they are as autonomous as print books, their preeminence could become a real danger to the freedom to read and write.
Posted by Captain Future at 10:57 PM No comments: 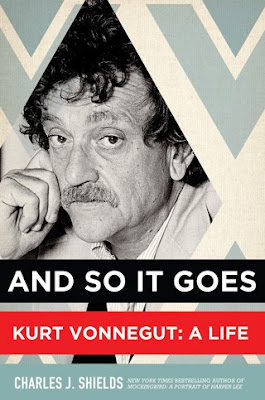 And So It Goes
Kurt Vonnegut: A Life
by Charles J. Shields
Henry Holt

I saw Kurt Vonnegut three times.  Once when he was on stage in Pittsburgh in the 1970s, probably at the event mentioned in this biography as demonstrating his increasing phoniness as he became famous.  Another time in the 70s was in Boston.  I was an arts and culture editor and writer for the Boston Phoenix and other publications, so I interviewed a number of famous people.  I had not succeeded in interviewing Vonnegut however, and one afternoon as I walked near one of the big hotels I thought, what if I ran into Vonnegut here?  Several hours later I was in a different part of Boston, in a big restaurant late at night with members of a rock band I was writing about.  The drummer was lamenting the absense of groupies--it was supposed to be a perk of the job, but where were they?  At that moment I turned my head and my eyes met those of Kurt Vonnegut, sitting at a distant table and looking with less than a charitable eye at our booth, and the young men across from me in the shaggy hair cuts.  (I learned later he had been speaking at Boston University that evening.)

The third time was in the late 80s or early 1990s, and I was walking in Manhattan on a sunny winter afternoon.  Walking towards me was Kurt Vonnegut.  He looked at me the way that celebrities often looked at me in New York--like I should be someone they know--but like them, he looked away when he failed to recognize me.  Among all the pedestrians in heavy coats, he was wearing a bulky cardigan, as if he were walking from one room to another in his house.  I smiled: this Manhattan neighborhood was his house.

I mention these three trivial moments to indicate a couple of things.  Kurt Vonnegut was a real if distant person in my personal universe, due to his writing, and secondarily to a few people we knew in common.  He had taught at the Iowa Writers Workshop just a couple of years before I got there, and my writing teacher for my senior year of college had been one of his students (which meant that I got a start on many others in reading Vonnegut's books.)  This places me also in that 60s generation, the college-age students who became his most enthusiastic fans.  For us, he was not a phony in a white suit--I remember that 70s speech as being funny, insightful, provocative and inspiring: as being Vonnegut.

I've been around long enough now not to expect writers to entirely live up to their authorial personae.  The Iowa Workshop--or even being around visiting writers in college--showed me that writers could be abusive drinkers, sexual predators, liars and cowards.  And what I didn't see I heard, because writers could also be vicious gossips.

I also learned from writing how hard it is to maintain a balance.  The world being created on the page is a very different world from the one populated by real people, in which actions have actual consequences that can't be corrected in the next draft.  I know a writer now, with several very well-respected novels, who said he gave up writing novels because it was too hard on his family and his relationships.  The sensitivity required of a writer writing leaves a painful vulnerability to reality, while the discipline and standards of writing so intensely can feed a monstrous impatience with the world, for its imperfections and shoddy standards, as well as its conspiracy designed to destroy your concentration.

This first biography of Kurt Vonnegut tells some absorbing stories, especially about his World War II experiences as a POW in Dresden, and it provides some illuminating facts within the narrative of his childhood and student days, his years writing public relations for General Electric and his struggles as a professional fiction writer, up to his breakout novel, Slaughterhouse Five.  There are some nuggets as well in the more scattershot narrative of the rest of his career, the rest of his life.  But basically, I don't trust it.

For those who need their memories refreshed, Kurt Vonnegut became famous in the late 60s and 1970s for novels such as Cat’s Cradle, God Bless You, Mr. Rosewater and especially Slaughterhouse Five. A countercultural hero, in later years he was a popular speaker, and a much-banned author in schools across the country. He was a gallows humorist who took a cosmic view, a 20th century Twain crossed with H.G. Wells. His inimitable but infectious prose style became seductive and characteristic for a generation.  He died in 2007.

Much in the currently fashionable style of biography that emphasizes the shocking difference between public image and the actual life, author Charles Shields portrays Vonnegut as a deeply sad man. The depressive son of a mother who committed suicide on Mother’s Day, he became bitter about both his upbringing and his literary reputation. He could be kind but also thoughtless and heartless towards others. His public persona was a disguise. His relationships were mostly bad, culminating in a final marriage with a famous photographer who essentially abused him.

The New York Times reviewed this book twice, and both reviewers apparently take its portrait as an accurate one.  I am not so sure.   I don't entirely trust his facts (despite ample annotation and sources) or the weight he gives to them, partly because the people he admits didn't cooperate with him mostly come off badly.  (And even though Vonnegut himself “authorized” this biography, he died before he provided much information.)   But mostly I don't trust the interpretations, the meaning and weight he ascribes to the facts, to create an overall portrait. I don't trust the story Shields tells.

One major reason I don't trust the story he tells is that I don't trust the writing.  It has no grace or wit.  It is often crude. The book’s judgments of people were often brute psychological labels.  The assured tone about matters and intentions that could only be conjectured is troubling. However, Vonnegut readers can find biographical facts that suggest elements of his fictions (including significant ones Shields doesn’t point out.)

Above all, Shields has little useful to say about Vonnegut's work, which is what the rest of us know. He does point out sources of Vonnegut’s style, mostly that Vonnegut himself noted.  Instead, Shields’ comments on Vonnegut’s books are particularly simplistic and reductive, often mere parroting of unfavorable reviews.   He misses important dimensions of how Vonnegut transformed his own experience and observations into insights that informed his writing. “Defeat is the ordinary human experience, not victory,” Vonnegut said. “We can expect it, be prepared for it and not be humiliated by it.”

Is my view some stubborn adherence to nostalgic 60s hero worship?  Vonnegut was a voice when we needed one, and I don't repudiate that at all.  While biographical information that Hemingway was posturing liar or Joseph Heller was a lousy father may tarnish my youthful image of them, and a pall is inevitably cast on their work, in the end the words on the page are what makes a difference in our lives.

Despite his unconvincing defenses, Shields basically makes Vonnegut sound like a careerist hack who was prey to his own weaknesses, and whose work won’t last. We’ll see. I tend to think Vonnegut’s work from Slaughterhouse Five onwards will gain more respect, assuming the future allows for much reading.  Shields writes about innovations that Vonnegut made in the writers workshop process, but except for a few cursory example he barely mentions Vonnegut's informed and uniquely expressed views on literature and writing.  These also contribute to his standing in American literature.

I hope this isn't the last Vonnegut biography.  Maybe future biographers will vindicate Shields but I'd feel better with a second opinion.
Posted by Captain Future at 12:32 AM No comments: