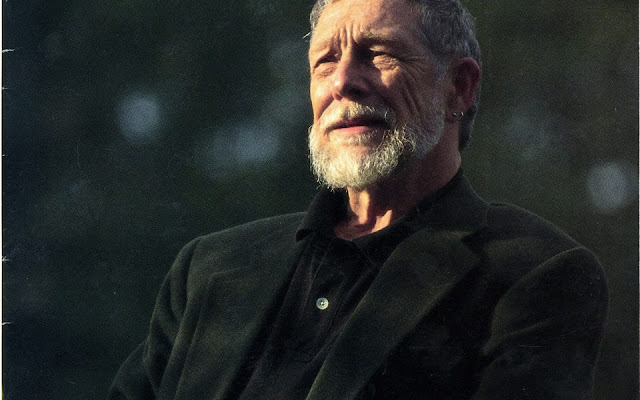 Gary Snyder, American poet, essayist and teacher, is 89 today. In celebration of his birthday, I'm posting the poem that comes last in his 1991 collection, No Nature: New and Selected Poems. It's become one of my favorites.

RIPPLES ON THE SURFACE

A scudding plume on the wave--
a humpback whale is
breaking out in air up
gulping herring
---Nature not a book, but a performance, a
high old culture

Ever-fresh events
scraped out, rubbed out, and used, used, again--
the braided channels of the rivers
hidden under fields of grass---

The vast wild
the house, alone.
The little house in the wild,
the wild in the house.
Both forgotten.

Both together, one big empty house. 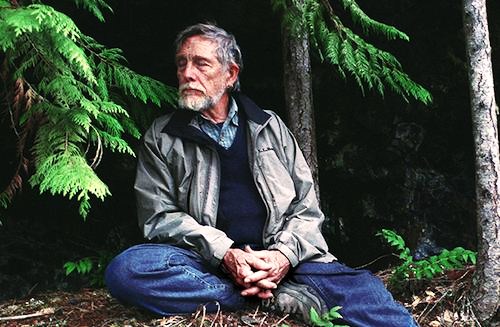 I first heard Gary Snyder read when I was a student at Knox College in Galesburg, Illinois in the spring of 1967. In his late 30s then, Snyder had been a presence in American poetry for over a decade.  He was among the poets who read at the famous Six Gallery evening in 1955 that premiered Allen Ginsberg's Howl, and launched the so-called Beat movement.  A student of American Indian cultures and both Chinese and Japanese languages, Snyder interspersed months and years at a Zen monastery in Japan with jobs on an oil tanker, on logging crews and as a fire lookout. 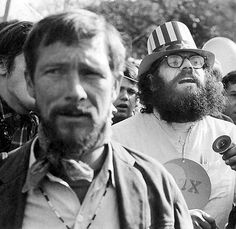 He was recently back from Japan when, just a couple of weeks before his Knox visit, Snyder accompanied Allen Ginsberg in leading the legendary Human Be-In in San Francisco that established the counterculture alliance between hippies and political activists, and prefigured the upcoming Summer of Love.

The Knox Student lists Snyder's events as a lecture on Tuesday (subject: "What's Going On?") and a reading on Wednesday, both in the Alumni Room of Old Main beginning at 7:30 in the evening.  While Snyder did speak about political, cultural and environmental subjects at one or both of his appearances, I recall him reading a great deal of poetry at both--hours of it. 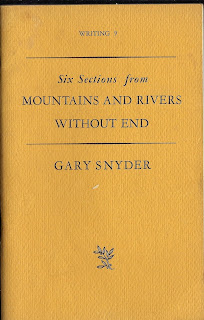 I'm pretty sure he read from Rip Rap and the completed sections of his long sequence Mountains and Rivers Without End.  He probably read work not yet published in book form; I seem to recall he read a version of "The Circumambulation of Mt. Tamalpais."  ("Circumambulation" is a ritual walk around a sacred object in Buddhist and Hindu traditions, and Mt. Tam near San Francisco is considered a sacred mountain. A year or two later, I participated in such a circumambulation of Mt. Tam.)

Snyder's readings were mesmerizing: poems of direct descriptions in brief bursts of mostly nouns and verbs, and short, often one syllable words (a conscious choice in Rip Rap due to his observation of classical Chinese) that produced a cumulative, incantatory magic.  After awhile the words became mostly sound and you got tired, but then they took you to another level.  I doubt that many audiences anywhere had the opportunity to hear Gary Snyder read for such sustained periods. 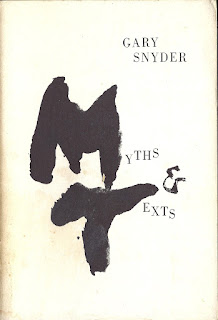 His "talk" was probably similar to observations in his essays "Buddhism and the Coming Revolution" and "Passage to More Than India" published in his 1969 book Earth House Hold (the title is one literal definition for "ecology"), and also reprinted in Allen and Tallman's 1973 The Poetics of The New American Poetry.   I'm certain, for example that he quoted (as he did in "Buddhism and...") the old International Workers of the World slogan, "Forming the new society within the shell of the old."

His emphasis on the ignored value of the non-human and Indigenous cultures struck a chord with me: as he wrote, "In fact, it is my own view that the coming revolution will close the circle and link us in many ways with the most creative aspects of our archaic past."

Snyder also was an impressive presence on campus.  One attendee remembers that he wore an earring, some decades before this became a male fashion.  I recall the bells in his boots: little jingle bells that rang as he walked.  I loved that, and tried it myself for awhile.  But even in the upcoming counterculture it didn't catch on, alas.  Still, I remember sitting in the audience for the second event, alive with anticipation, and hearing those jingling boots tromping down the Old Man hall.

The party for him was at a student apartment.  I asked him one question.  Though I don't remember what I asked about, it was in the nature of "how do you know?"  He answered that I'd have to "experience it."  I immediately jumped to the erroneous conclusion that he'd advised me to take LSD.  Such were the nerve endings as the wildness of the counterculture approached.  It was in fact a practical as well as a perfectly Buddhist answer to almost anything. 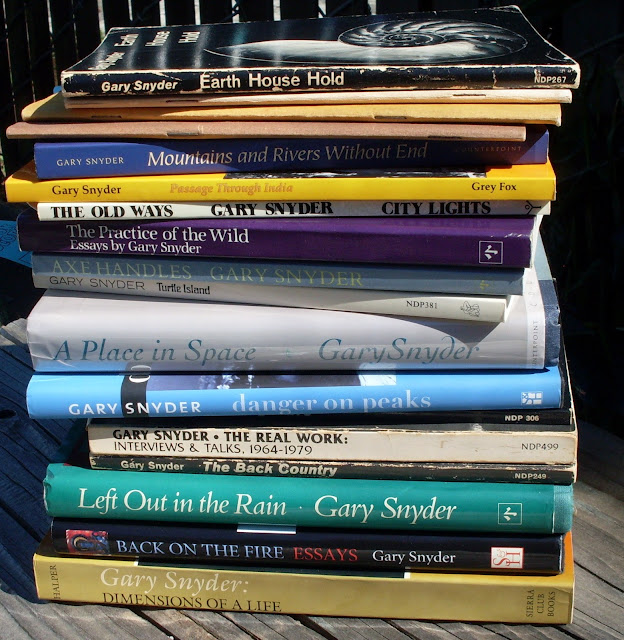 I heard Snyder read again a few years later at a benefit reading for an ecology organization in Berkeley. He was among his old San Francisco colleagues, including Lew Welch, who read his famous California poem with the refrain "This is the last place/there is nowhere else to go."  Months later Welch disappeared, a presumed suicide.  I spoke with poet Michael McClure in 2003, who read there that day as well as at the historic 1955 event that launched Howl, and he remembered that reading in Berkeley as something special.

For the next five years Snyder published poems in periodicals, from Look magazine and the New York Times to Poetry and the Hudson Review to Kayak, Caterpillar and Unmuzzled Ox.  His collection Turtle Island (a traditional name now applied to North America) sold something like 100,000 copies and won the 1975 Pulitzer Prize.  It included the prose statement "Four Changes" that set the agenda for a number of environmental groups. 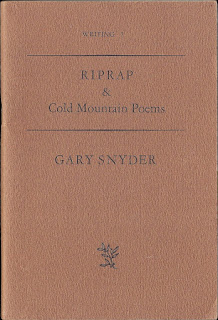 Pretty soon after Snyder's Knox reading I bought the Four Season Foundation printings of RIPRAP and Cold Mountain Poems, and Six Sections from Mountains and Rivers Without End at the Knox bookstore, soon adding the earlier Totem Press edition of Myths and Texts.

Probably his prose masterpiece is The Practice of the Wild, published in 1990.  It was one of my first acquisitions as a resident of California in 1996.  I saw it in the window of Arcata Books, used.  The bookstore owner sold it to me and said, "I knew it wouldn't last long.  I just put it out this morning." 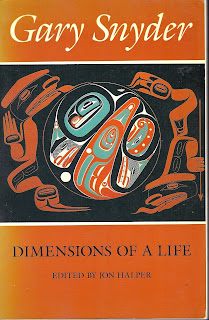 I had already found Gary Snyder: Dimensions of A Life (probably on a sale table at the U. of Pittsburgh bookstore), a large collection of tributes on the occasion of his 60th birthday. The Haida artist Robert Davidson provided the cover illustration. When I mentioned the book to Davidson in 1994, he was surprised to hear Snyder was still alive.  He thought it was a memorial volume. But when I met the novelist and poet Jim Dodge here in Arcata a few years later, I could recall having read his contribution to this collection.

For me, living in California brought new dimensions to Snyder's work, both in terms of places he wrote about and the relevance of his writing to our ecology. (He lives most of a day's drive south of me, in the foothills of the Sierras.)  So I began to acquire his more recent books: the completed Mountains and Rivers Without End (1997), Danger on Peaks (poems, 2004), A Place in Space (new and selected prose, 1995), Passage Through India (1992 edition) and Back on the Fire (essays, 2007.)  I even got his doctoral thesis, He Who Hunted Birds in His Father's Village: The Dimensions of a Haida Myth (1979.)  Even at that, there are books I missed.

More recently I added The Etiquette of Freedom (2010), a companion book to a film featuring Snyder in conversation with poet and fictionist Jim Harrison, which also includes the film on DVD.  Now I have another experience of Snyder reading his work (which he said "is mostly done") in his late 70s.  In honor of his 89th birthday, I just purchased a recycled copy of No Nature: New and Selected Poems.

Gary Snyder's writings led me beyond his own books to a wide network of others, too numerous and involved in their connections to describe here. They helped define my attitudes and activities in relationship to forests and non-human life in general, and they were checkpoints along the way.  To some degree, they led me to far northern California, where I've lived for more than 20 years now.

So I celebrate his work, and the fact that he is among us now to celebrate his own 89th birthday.
Posted by Captain Future at 12:00 AM No comments: