The Deptford Trilogy (and More) by Robertson Davies 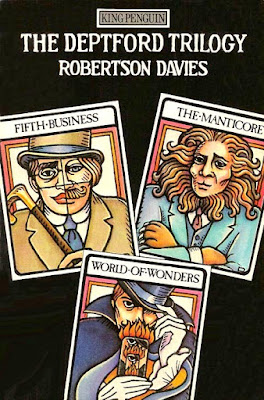 As in his previous trilogy, each of these three novels focuses on a character from a small Canadian town (in this case Deptford, Ontario, said to be based on Davies' birthplace of Thamesville), though this time all three of these characters appear in all three of the novels.

As in the Salterton Trilogy, the first book takes place in the town, while the third takes place overseas (largely in the previous trilogy, entirely in this one) and is the story of the character's education, artistic and otherwise. This time the middle book also takes place in Europe.

As the author himself said, the trilogy follows the consequences of a single act: a boy throws a snowball with a stone hidden in it at another boy, who dodges, and it instead hits a pregnant woman.  Those consequences are followed over the subsequent sixty years.

Fifth Business is narrated by the boy who dodged the snowball, Dunstan Ramsey, who becomes a teacher and scholar, with a special interest in the topic of saints.  There is an especially haunting portrayal of the woman hit by the snowball, which bears on Ramsey's acute interest in saints. This novel more than any other established Davies as an important novelist, and though it continues particular Canadian concerns, as a novelist with international appeal.

The Manticore is the account of the son of the rich and powerful man who as a boy threw the snowball.  This is the first Robertson Davies novel I read, some 25 years ago.  It is the account of this character's analysis with a Jungian therapist in Zurich.  This narrative, along with a few other odd fragments and personalities that crossed my path at the time (an article on James Hillman, the Jung that Chris Stevens quoted on Northern Exposure, etc. ) first got me interested in Jung.  I now have nearly all of his books, as well as many about him, and have even read some.

Books as it turns out were as close as Davies got to Jungian analysis.  Though Jungians were convinced he had been analyzed, and even guessed by whom (the famed Marie von Franz--her book on creation myths was another of my avenues to Jung), Davies claimed he'd never had a single analytical session with anybody.

World of Wonders is the story of the boy born prematurely because of the trauma induced by that snowball blow.  He became a famous magician, but his hero's journey is harrowing--and told at length.  The Jungian influence is important throughout (even "the fifth business" is a term about archetypes on the stage), and there is a dramatic unity--the first novel ends very dramatically, and the rest of the trilogy follows more or less in chronology. 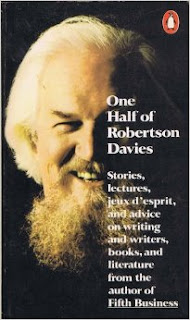 Re-reading this trilogy led me to a book of interviews with Davies and especially his collection of speeches, One Half of Robertson Davies.  This is a remarkable book I read with great profit.

He spoke highly (and therefore bravely) of the much maligned dramatic form of melodrama. His immense knowledge of books and historical context was enlightening.   Davies turns out to be a champion of feeling, especially in the arts.  His series of four lectures on Evil is an eloquent corrective to some of the main intellectual currents of his time.  Regardless of how much one agrees with him on religious matters for example, it was intensely valuable to hear what he had to say with such clarity, fairness and good humor.  I'm happy to have known him in this way.

Posted by Captain Future at 1:41 AM No comments: