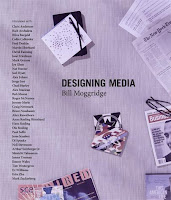 Still looking for that last smart book gift for your favorite technowizard or tech-savvy student of contemporary culture and the future? Here are a few selected fall releases from the Shangri-la of techdom, MIT Press.
Texture: Human Expression in the Age of Communication Overload by Richard H.R. Harper (MIT) takes a social science approach to its stated topic, using the metaphors of touch and texture to emphasize the human benefits. He finds that despite the complexities and disadvantages of being inundated with emails, texts and tweets, “to suggest that people communicate too much is like saying that people are bound to each other in too many ways...” Well, maybe, but I wonder if this doesn’t beg the question.
While Harper’s book is billed as an extended personal essay, Designing Media by Bill Moggridge (MIT)looks at the information revolution through interviews (including Wikipedia founder Jimmy Wales and Craiglist’s Craig Newmark but also artists, musicians, magazine and book editors, designers, venture capitalists, video and filmmakers, political media consultant etc.) with photos throughout and a DVD tucked in the back. There is a surprising sense of immediacy in the interviews, and improvisation in the organization of the book (though that might be deceptive.) Apart from the content, it looks and feels like a textbook. There’s bound to be insights for lots of different people in this wide range of interviews, and reference material for those who start with the DVD.

Voice: Vocal Aesthetics in Digital Arts and Media, edited by Norie Neumark, Ross Gibson and Theo van Leeuwen (MIT) is a different sort of anthology: gathering voices on the various implications of voice, examining insights from the arts (dance, video and sound art) as well as video games and other technologies. There’s a chapter (by Martin Thomas) on the damage of written language to aboriginal spoken language, and the role of recording technology in documenting and reviving oral tradition. These essays vary from requiring sophisticated attention to knowing various academic and technical languages. Though some essays treat “voice” as expressed in ways other than in sound, voice is especially interesting because sound is often overlooked in what we choose to call our visual culture. There's also a bias against sound as an element of culture in the past because until recently it couldn't be preserved, and so our sense of the past is warped by a dependence on artifacts that preserve only visual and tactile impressions.

Looking towards the technological future, a number of books have been published recently—or soon will be—on the perils and opportunities of combinations of flesh and technological enhancements, of human and machine. How to Catch A Robot Rat: When Biology Inspires Innovation by Agnes Guillot and Jean-Arcady Meyer (MIT) looks at some 25 years of research—some that looks at biological creatures to help design robots, and some that obtain insights on biology by examining what’s worked and hasn’t in designing robots. Though social, cultural and philosophical insights gleaned come bubbling out of the authors’ explanations of this research, the emphasis is technical.

With each year the convergence comes closer—and where that’s headed is what Nicholas Agar worries about in Humanity’s End: Why We Should Reject Radical Enhancement (MIT). The question is not necessarily whether humans will be replaced by robots in the outside world, but from inside themselves. Agar writes not just about machine technology but chemical and biological enhancements to allow humans to do more, be a great deal smarter, and live very much longer. Agar is engaged and tries hard to be engaging. He organizes arguments made elsewhere (about AI for example) as well as making his own. It’s a thought-provoking web of views on these subjects, which prompt questions on what it means to be human anyway. But as a practical matter, I am deeply skeptical that in view of the extreme economic, social and cultural challenges of the Climate Crisis and other ecological causes, there will be enough in the way of resources to go down these roads very far. Still, I’m sure there will be those among the extremely rich who will try.
Posted by Captain Future at 10:58 PM